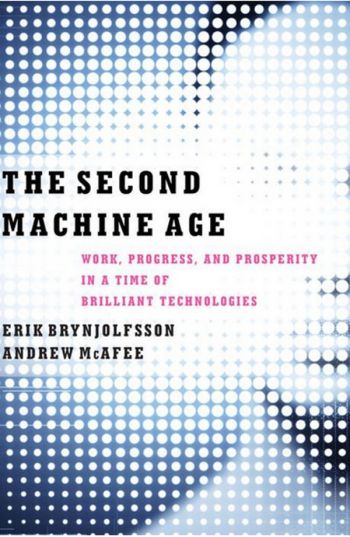 The Second Machine Age: Work, Progress, And Prosperity In A Time Of Brilliant Technologies. By Erik Brynjolfsson and Andrew McAfee. W.W. Norton. 320 pp.

For thousands of years humanity had been on a slightly upward trajectory of progress, until the Industrial Revolution dramatically changed the way people worked and lived. People began moving away from farms to factories in urban areas. The quality of life greatly improved as machines provided entertainment as well as help with everyday chores and mass production—and availability—of all kinds of goods.

The Industrial Revolution began in the second half of the eighteenth century when James Watt significantly improved the already existing steam engine to produce massive amounts of power that could run heavy machinery in factories. Up until this point, the muscles of animals or humans, both with limited capacity, had powered many things. Even though the steam engine was rapidly replaced by the gasoline engine, it was the catalyst for the industrial revolution.

Today’s steam engine is digital technology. And the technology that most of us touch in our daily lives have, and will, profoundly change work, and society in general.

Authors Erik Brynjolfsson and Andrew McAfee, who both hold senior posts at MIT, draw three conclusions about the impact digital technology will have on the future:

1. Astonishing progress is being made in digital technology, which is defined as those technologies that have computer hardware, software, and networks at their core.

2. The transformations brought about by digital technology will be profoundly beneficial.

3. Digitization is going to bring with it some thorny challenges.

The authors conclude that we are at the beginning of an exponential growth in digital technology that will provide as much change to humankind as the Industrial Revolution did in the middle of the eighteenth century.

We have all heard of the driverless Google cars, but to get a better understanding of how these cars worked, the authors arranged for a ride in one of the Google autonomous vehicles.

Even though the car was driving itself, there were two drivers from the Google Chauffeur team in the front seat in order not to cause panic among drivers who might see a driverless car on the interstate. The two Google drivers were using a laptop to continuously monitor the traffic and the information coming in from the Google car’s sensors. What is amazing about the Google car is its ability to not only monitor its own driving performance, but also the performance of the other nearby drivers. The Google car can sense—and react to—another driver beginning to change lanes even before the human eye can detect that.

The Google car is limited to use on highways and streets that have been mapped by Google. However, the amazing story is that just a few years ago the greatest minds in technology believed a driverless car was many years into the future.

However, as I write this review just a little over a decade later, I’m asking my Apple watch to tell me how to spell words. It not only gives me the correct spelling almost instantaneously, but also displays the correct pronunciation and a brief definition of the word. This is all done effortlessly, even though I have a southern accent.

For a person who is a self-described poor speller it is incredible to have an entire dictionary on your wrist.

Each new generation of voice recognition software has improved. Computerized translations of languages is also improving. The translation software company Lionbridge has partnered with IBM to develop an online application called GeoFluent that instantly translates chats between customers and troubleshooters who don’t speak the same language. Ninety percent of the GeoFluent users ranked the software acceptable for business purposes.

Robot technology is another area that had a slow start, but which has gained significant momentum in recent times. The artificial intelligence performance of the computer named Watson on the game show “Jeopardy” is an example of that progression. When Watson was first designed as a competitor for “Jeopardy” in December 2006, he could only answer correctly about 15% of the questions asked. In his winning appearance on the program in January 2011, Watson outperformed two of the most winning contestants in its history.

Robots have also become more advanced in factories. Early robotics could only handle performing the same task over and over. Robots didn’t have the ability to do multiple tasks.

However, a new company named Rethink Robotics is developing robots that will perform imprecise tasks that typically only by human factory workers with human eyes and hands have been able to handle. The robots the firm is developing are less expensive, with costs as low as $20,000 per robot. They can be trained to perform their tasks by other, human factory workers, rather than having to be programmed.

The rapidly increasing pace of digital innovation is outstripping some predictions. In 1965 by Intel’s Gordon Moore stated that computing power would double every year while the cost would remain relatively the same for the next ten years. His prediction has become known as Moore’s Law, which translated into a prediction that circuits would be five hundred times as powerful in 1975 as they were in 1965.

The only mistake Moore made in his prediction is that it has come close to being true for almost 50 years—five times his projection. The only real change that has occurred in Moore’s Law is that the doubling of power now takes about eighteen months as opposed to his original prediction of one year. The constant exponential increase in the computing capacity is what makes it seem like digital technology is moving so quickly now.

The pace of change is driving another type of evolution: Digital technology is at a crossroads where two types of existing technology are beginning to merge to make an even better product. The authors give the example of the smart phone application Waze. It combines social media and mapping applications to make Waze which alerts travelers of various road hazards and traffic slow downs in real time because the users are all reporting various incidents as they travel. Waze is extremely helpful in providing real time traffic information to you as you travel, but you must allow the software to track where you are as you travel. The tradeoff here is between convenience and privacy.

One of the most profound benefits of digital technology is the proliferation of smart phones globally. In 2000 there were approximately seven hundred million mobile phone subscriptions in the world, fewer than 30% of which were in developing countries. By 2012 there were more than six billion subscriptions and over 75% were in developing countries.

As communication channels develop all over the world smart phones allow people access to information they have never had access to before. Anyone in the world with an internet connection and a computer can have the same resources available to them as the most developed countries. This allows students in very remote locations access to on-line courses at universities all over the world.

Medical advancement has also been driven by digital technology. With the advancement of 3-D printers, it won’t be long before orthopedic replacements will be an identical replica of the bone being replaced. After Watson, the IBM computer that won on the game show, retired from game shows the developers begin to focus on medical applications.

They are working to make Watson a resource for doctors to use in diagnosing illnesses based upon the combination of information in the patient’s history and the results of their tests. This artificial intelligence won’t replace the doctor, but Watson will have volumes of medical references to draw from to assist in diagnostics. The deaf have already been given the gift of hearing through the cochlear implant and it is believed very soon the blind will be given sight by retinal implants.

As digital technology forces more and more services to be delivered at no cost to the consumer, is the traditional definition of Gross Domestic Product less useful, less meaningful?  There will be much rethinking, on top of that which has already occurred.

All around us, the impact of digitization can be seen. The music industry is a classic example of how digital technology has benefited the consumer, but cost the industry profits. From 2004 to 2008, the total revenue from music sales dropped from $12.3 billion to $7.4 billion—a 40% drop. However, during that same time access to music proliferated for the consumer. You can purchase almost any single song on a computer or phone as opposed to buying the whole album and many songs are totally free.

As a banking executive, I believe an analogy can be made between the music industry and banking services. Ten years ago most checking accounts had a monthly fee. Now there are many accounts available to the consumer and small business customers at no cost. As more and more bank customers begin to use Apple Pay, Square, and PayPal the non-interest income sources for banks are diminishing.

How will banks be able to add services in the future that will bring dollars to their bottom line? As digital technology spreads throughout the world will banking evolve into a global economy with common currencies? These are just two of many very important questions for the industry as things roll forward.

The authors don’t ignore the down side of technological revolution—job impact.

There is no doubt life has been made easier with all of the new developments in digital technology, but one of the social consequences is the loss of good paying jobs for middle-income workers without advanced education. Middle income workers are those less skilled workers that had line jobs in manufacturing and other manual labor-type jobs. The displacement of workers is greatest for this group as a result of technology. These are the workers whose job functions have been replaced by robots or computers. Without new training or education, these workers will have a difficult time replacing their income or even finding jobs when they become unemployed.

However, the skilled workers with degrees and even advanced degrees are seeing the demand for their skills increase as well as their incomes as the U.S. economy becomes even more of a service-based economy. Interestingly enough there is still great demand for very low skilled labor—because there has not been a lot of computerization of their jobs.

The predictions made in this book about digital technology could have a profound impact on both the national and global economy. Since I read this book, I have become aware of changes already taking place as the authors predicted.

If you are interested in the expanding impact digital technology will play in the world, you must read this book. I find myself using it frequently as a reference. The book is well written, easy to read, and I highly recommend it.

More in this category: « Learning from Google’s M&A strategy Scoundrels, savants, and saviors of finance »
back to top