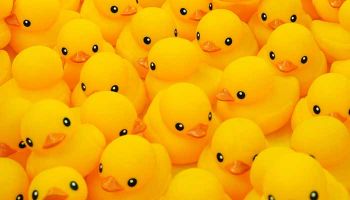 Reporter's Notebook is where Banking Exchange staff rise above the ordinary fray to get a perspective on what's going on. This edition looks at how an analogy about quacking ducks evolved from a pro-deregulation statement to something much different.

It’s funny how words, phrases, and analogies can evolve over enough years to completely reverse their meaning, and sometimes at critical times.

In England, for example, the word “Tory” now means a member of the British Conservative Party. During our revolution, the word referred to the American loyalists. And way, way back, “tory” meant “highway robber.”

Financial services policymaking has been replete with such codewords, and over time their meaning does change. Several relate to the fintech debate. This includes terms such as “level playing field” or “unintended consequences.”

But first, speaking of ducks, banking, and fintech …

Back in 1979, then-head of Citicorp Walter Wriston gave a keynote speech at the ABA Annual Convention in New Orleans, where he pointedly spoke of Merrill Lynch, then an aggressive, growing, and innovative player that was not part of a bank at the time. In fact, the Cash Management Account that Merrill was pushing hard had become so popular that Wriston declared that “if it quacked like a bank, it’s a bank,” or words to that effect.

This was at a time that that account, and other financial innovations, were sucking funds out of banks, or at least out of bank control. (The distinction is a long story we won’t go into now.)

This major speech and the “duck quote” became a rallying cry for years of efforts to deregulate banking. The point was, what was good for the goose, er, duck, was good for the banks. Wriston pressed for more elbow room for banks.

I was present at the original speech, and heard the line about the duck in many venues thereafter. Not quite as often as the line Wriston also used that day about Willie Sutton and his famous quote about robbing banks because “that’s where the money is.” (Which Sutton never said, but that is also another story.)

Now, 37 years later, Wriston’s duck came up in a speech by John Williams, president and CEO of the San Francisco Federal Reserve Bank, before a conference of alternative lenders in the bank’s headquarters city, on April 12.

The speech had many interesting points, balancing the potential risks and the potential rewards of budding nonbank fintech. Towards the end, the elderly duck flapped his wings once more.

Said Williams: “While fintech can also improve not just the accessibility but the quality of service—something that consumers are demanding—we also need to look out for the resilience of the financial system as a whole. As the fintech industry continues to grow, both as nonbank institutions and via partnerships with banks, potential risks to the financial system and economy expand in proportion.

“Moreover, for our financial system to be efficient, it’s important that we have a level playing field, regardless of how institutions prefer to describe themselves or what kind of charter they hold. As a matter of principle, if it walks like a duck and quacks like a duck, it should be regulated like a duck.” [Emphasis added.]

It’s interesting how that duck and its rhetorical companions have evolved—and not just in Williams’ speech.

About three weeks ago, during the American Bankers Association Government Relations Summit the issue of fintech regulation came up during the Q&A with Chairman Jeb Hensarling (R.-Texas) of the House Financial Services Committee.

Hensarling’s questioner didn’t per se use the phrase, “level playing field.” But he clearly asked about regulating fintech players as if they were banks—one way to level the competition.

Hensarling did not agree with that tack.

Instead, Hensarling said he would prefer to ease regulation of banks than rope marketplace lenders and other such players under banks’ current regulatory burden.

An interesting difference of viewpoint, especially at a time when many observers are predicting that certain fintech players, such as marketplace lenders, will find themselves under a regulatory umbrella soon.

Upping the ante in Washington for market lenders

The group’s stated goal: “To promote a transparent, efficient, and customer-friendly financial system by supporting the responsible growth of marketplace lending, fostering innovation in financial technology, and encouraging sound public policy.” The group has published standards for operating marketplace lending operations. The organization recommends voluntary adoption, which sounds like an attempt to promote self-regulation. I recall several decades ago this idea briefly catching on in banking. It didn’t go anywhere, but that was from a beginning under an extensive regulatory umbrella.

The standards, worth reading, cover responsible lending; investor transparency and fairness; safety and soundness; governance and controls; and risk management.

Now, back to John Williams’s speech. He noted before getting into his points about fintech that as a district Fed president he is not directly involved in developing rules or regulations.

“Instead,” he explained, “my aim is to lay out issues and questions that should be part of the ongoing conversation about how fintech can make our financial system—and ultimately our economy—more successful at achieving its fundamental goals.”

He explained that what concerned regulators is “the unintended consequence.”

Williams used it to describe the effects of innovation left to its own devices. ABA and others attempting to revamp aspects of the Dodd-Frank Act have often used the very same phrase to point to drawbacks about that legislation and its implementing regulations.

“We’re not here to call the cops on the party,” continued Williams. “We’re here to make sure no one jumps off the roof. And while we see the potential in innovation, we’re also looking at the other side of the coin.”

The first such “coin” Williams discussed was the ability of fintech “to reach historically underserved and economically disadvantaged communities.” This applies in both developed and developing economies, he noted, and fintech lending can help both businesses and individual borrowers.

However, the flip side of this coin, Williams suggested, was the risk of marginalizing those communities even further.

“I think back to exclusionary practices in lending like redlining,” he said, “where portions of the population were denied services based on where they lived. Even when outright discrimination was banned, lending metrics translated into disenfranchisement of racial and ethnic groups. It would be a travesty if, despite the best intentions in the world, new technologies designed to improve the availability of credit instead ended up reintroducing that kind of exclusion, by, say, basing decisions on zip codes or other demographic metrics.”

Williams touched on fintech developments that hold out savings and investments to unbanked or underserved consumers. But he said that historical precedent made it clear that “the unscrupulous will prey on the vulnerable, be it through predatory lending, irresponsible payday loans, outright fraud, and more.”

Big data and analytics, a third area Williams explored, hold out the potential to improve operational efficiency, risk management, and decisionmaking. They could even assist with “know your customer” compliance.

Against this, Williams balanced the power of some kinds of fintech to make criminal and terrorist activity even easier.

In the end, regulator wants regulation

Williams came to this conclusion:

Somewhere along the way, all players will have to decide what that quacking duck represents—market innovation or regulated innovation, or something in between.

More in this category: « Larger than life, and not even there Deposits, buying local, and community banking »
back to top