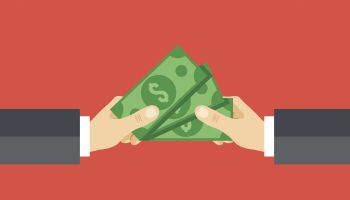 Reporter's Notebook is where Banking Exchange staff rise above the ordinary fray to get a perspective on what's going on. In this edition we discuss the future of banking in a blockchain age with Chain's Clint Gilliam.

“We try to avoid hype,” says Clint Gilliam. “We’re the first to admit that blockchain is over-hyped technology.”

Gilliam, a partner lead at Chain, said this in a conversation on the exhibition floor at this year’s Money 20/20 2016 Conference. It’s not a convention where hype is in short supply—even the session water coolers are sponsored. Many types of players come together for a short time in one place. Blockchain technology was a hot area at the conference this fall.

Speaking of hype, one school of thought that receives a great deal of it holds that blockchain technology will somehow replace banks. That doesn’t appear to be Chain’s school, judging by the partners it works with, including its notable deal with Visa.

“I’m a big believer that banks are not going to go away,” said Gilliam. “I think that banks have an important role to play.” Specifically, one variation on this theme is banks utilizing blockchain technology for digital value transfer in a decentralized manner.

Prior to joining Chain in January, Gilliam had been a product manager at clearXchange, now known as Zelle. During that time he served on the Federal Reserve System’s Faster Payments Task Force. One point that struck him during that time was that the Fed’s project has been focused on faster availability, rather than faster settlement. This ties in with the potential capabilities of blockchain technology.

In late October Visa Inc. announced that it was working with Chain, provider of enterprise software for setting up and participating in blockchains, to develop Visa B2B Connect. The platform, which Visa expects to pilot in early 2017, will be designed to speed up international high-value business payments.

During a conference presentation, Visa’s Vicky Bindra, global head of products and solutions, compared the ability to ship and track a package all over the world with the cumbersome process that uses the correspondent banking network to make large corporate payments. Bindra said the concept of Visa B2B Connect was to work with financial institutions around the world, participating in a specialized blockchain, to make such payments simpler, transparent, secure, trusted, and instant.

By contrast, the current system’s only rapid element is the notification that travels digitally to state that a payment is going to be made, according to Adam Ludwin, Chain’s CEO, speaking at the same session. That notification triggers a long series of steps—“rigmarole,” in Ludwin’s words—that culminates days later in the actual transfer of value.

“And that’s no good,” said Ludwin.

Discussions of blockchain technology can go from conceptual to highly specialized in the blink of an eye. But Ludwin put the concept of distributed ledger technology—what blockchains are, versus centralized databases and recordkeeping—quite simply: “I find it helpful to think of a blockchain as a digital network of safety deposit boxes. That’s what the ledger is.” 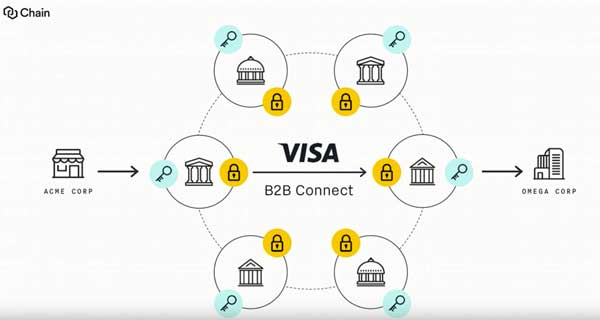 Visa B2B will be a permissioned private blockchain. In such a system, each participating institution has a cryptographic key, and that gives them access to the “box.” That’s the concept behind Chain’s effort with Visa, which involves the use of its enterprise software, Chain Core.

The B2B program will be managed by Visa, enabling exchange of payments between participating banks on behalf of their business clients. Visa promises “near real-time notification and finality of payment.” In his conference presentation Bindra stressed Visa’s desire for broad participation in the project, long term. The more players the more effective the whole, he explained.

What many bankers don’t realize, according to Gilliam, is that “blockchain is a network technology.” The Visa B2B system, unlike the traditional approach of the correspondent banking network, will result in direct transfers among banks, as indicated in the diagram.

What Chain hopes the effort will produce, he says, is “the experience of cash.”

One of the pillars of Chain’s approach to the blockchain is that banks should remain important to financial services. In late October Chain unveiled Chain Core Developer Edition, an open source developer platform designed to augment efforts to build blockchain architecture that, in the firm’s words, “maps to the use cases of the financial industry.”

Chain Core, which is free, enables users to start or join a blockchain network and create financial applications. A test network, operated by Chain, Microsoft, and IC3 (Initiative for Cryptocurrencies and Contracts), enables developers to test their prototypes.

“Our goal here is to create a platform for innovation,” explained Gilliam. When asked what Chain sees as its major competition, he answered, “the status quo.”

Chain and other blockchain backers are “on a long journey,” said Gilliam. “How do you set out to revise the world’s financial system?”

More in this category: « A blockchain you can edit? The Uberization of … me »
back to top