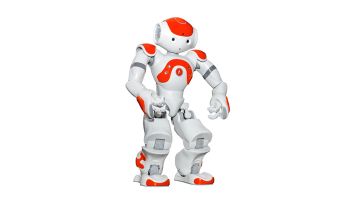 Wait, it’s not so crazy.

Witness a recent special report by The Economist magazine about the technology called blockchain and its relationship to a phenomenon called “smart contracts”:

“Boosters think such a machine [equipped with blockchain technology] could support ʻsmart contracts,’ where a computer can verify or enforce an agreement. The next step is for robots to go into business for themselves—for example, a computer server renting out processing capacity and using the profits to upgrade itself. That, for now, is science fiction.”

Maybe, but lots of things once deemed science fiction are commonplace—witness the “smart phone” communicator everybody now has in their pocket. (And it’s only the old ones that “flip” like Captain Kirk’s communicator of “the future.”)

Maybe we just need to hide the batteries?

A casual Google search demonstrates that lots of people have or are thinking about this particular type of off-the-wall thing.

In one camp are the Terminator-type alarmists who fear sentient machines doing away with the human race. Some high-powered names have weighed in on this side:

• Stephen Hawking—“The development of full artificial intelligence could spell the end of the human race. It would take off on its own, and redesign itself at an ever-increasing rate.”

• Bill Gates—“I am in the camp that is concerned about super intelligence. First the machines will do a lot of jobs for us and not be super intelligent. That should be positive if we manage it well. A few decades after that though the intelligence is strong enough to be a concern.”

• Elon Musk—“I think we should be very careful about artificial intelligence. If I had to guess at what our biggest existential threat is, it’s probably that.”

Then there are those who are less apocalyptic, but still concerned.

One observer, Andrew Ng, chief scientist at Baidu (a Chinese language internet search engine) and former employee at Google and Coursera, is quoted in several periodicals with comments to the effect that:

“In the past, when new technologies came along to replace human workers, the change was gradual. It generally happened over the course of a generation or two. This allowed us time to adapt and train the children of displaced workers to perform different jobs.

“But once the self-driving car becomes a reality, thousands of taxi drivers, truck drivers, and delivery people will be out of a job practically overnight, as economic competition forces companies to make the switch to self-driving fleets as quickly as possible.”

Along with that possibility comes even more mundane but recognizable potential problems. Eric Horvitz, director of the Microsoft Research Lab and Tom Dietterich, president of the Association for the Advancement of Artificial Intelligence outline three associated risks to deal with:

• Cyberattacks on AI systems by criminals, terrorists, and hackers who work for a government.

“Internet of Things” with legs or wheels

Given all that, one still has to acknowledge just how incredibly fast, robust, and wide-ranging the state of technology is growing. One can buy, today, machines that recognize faces and voices; predict what a given individual will likely buy in the next ten minutes; assimilate and make sense of data received not from humans but from other devices; and, in some applications, run the day-to-day operations of entire businesses, without the touch of a human hand.

Gartner, of course, which pretty much coined the term “internet of things,” has expounded on this phenomenon in a recent report:

“During the next five years, Gartner predicts that smart  machines will inevitably be relied on to make more decisions that are of growing significance to the business, raising the fear that they may become unstoppable or run out of control.”

To be sure, Stephen Prentice, a Gartner Fellow, qualifies this as “science fiction.” Still, he does have grave concerns:

“In effect, smart machines are now collecting information about practically every facet of human activity on a continual, pervasive, and uncontrollable basis, with no option to turn off the activity. The potential reputational damage arising from uncontrolled and inappropriate data collection is well-established and can be substantial.”

It seems like every day something about smart machines turns up in the news. Yuri Kageyama, an Associated Press reporter, filed a story this month about the unveiling of Pepper, a robot built by Japanese technology company Softbank. Not only is Pepper smart, but has “simulated” feelings. The vaguely humanoid object dances, sings, feels sad when it’s ignored, and responds with joy when it is praised by individual humans it has come to recognize. If you live in Japan, you can have one for about $1,600. Overseas sales are expected next year.

Then there is this from IBM: A walk-in coffee shop in London, called “Honest Café,” operates with zero human beings. It is completely self service, run by a large vending machine company. Apparently it is very popular, but the owners had a problem.

The solution: They installed IBM’s Watson Analytics—the same technology that famously won Jeopardy! a few years ago. Completely without human intervention, the technology consumes data, digests it with analytics, and produces information that differentiates between customers who just come in for a take-out cup and those who want to linger in the store.

So, coming back down to Earth, what does all this have to do with banking?

Accenture, through its Fjord design and innovation group, takes a stab at this. Its recent report seeks to define a completely new category of digital capabilities called “living services.”

“We call them living services for three reasons,” says Brian Whipple, senior managing director. “They will change consumer experiences such as travel booking and shopping in real time around us. They will be driven by things that are very proximate to us such as wearables and nearables. And, at the human level, living services will affect our lives in a much deeper and more positive way than mobile and web services have.”

More specifically, in financial services, Accenture gives these examples: “For a traveling customer, the bank could proactively negotiate better currency rates from ATM providers and seek and negotiate the best fuel prices as a customer is driving and prepay the bill. If the customer’s bank account ʻknows’ a customer’s power consumption, it could also predict his or her future financial state.”

Already, Accenture says, the Israeli company 24me has an app that automatically syncs with utilities and other services to remind and enable users to pay their bills.

Of course, how close is all that to building a smarter and less sensitive and more aggressive robot to go knocking on some deadbeat’s door and “encouraging” prompt payment?

Softbank's Childlike Robot With “Heart” Set To Go On Sale

The Future Of AI: A Non-Alarmist Viewpoint

Artificial intelligence Will Become Strong Enough To Be A Concern, Says Bill Gates

Artificial Intelligence Will Put Us Out Of Work

Blockchain (Report From The Economist)

More in this category: « Blockchain for banks awaits killer app Putting bang into “BPM” »
back to top