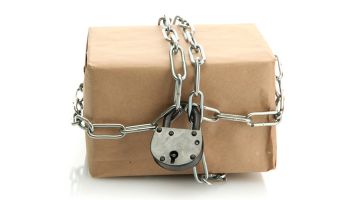 You may think your bank has locked up collateral on a commercial deal, but a federal forfeiture effort could mean that the chain and padlock belong to Uncle Sam, not your bank.

In today’s regulatory environment “knowing your customer” is absolutely essential. Even a novice banker can rattle off the myriad compliance reasons why failing to know your customer may mean trouble, particularly from the perspective of the Bank Secrecy Act and the Anti-Money Laundering laws.

Accordingly, bankers routinely gather background information and conduct site visits where appropriate, in order to minimize the incidence of doing business with high-risk customers—and to keep the regulators in check. Much of the due diligence, however, takes place at the front end of a relationship and the bulk of regular monitoring usually relates to a customer’s use of its deposit accounts, related wire transfer activity, and potentially suspicious activity that comes to the attention of bank personnel.

On the lending side of the business, the necessary due diligence takes place during the credit underwriting process, considering the intended use of the loan proceeds, the credit strength of the borrower and any guarantors, and the value of any collateral intended to secure the credit facility. However, typically, after the loan has closed there may not be a reason to closely monitor the customer’s activities or the use of the bank’s collateral.

Furthermore, few banks can profess to keeping such close tabs on their loan customers that they would be alerted to activities that may be criminal and subject the borrower to fines, penalties, incarceration, and asset forfeitures. And it is important to note that, while it is still a fairly unusual occurrence, corporations and other business entities do get indicted for a variety of crimes.

So, if a lender has exercised great care upfront and is confident that it has conducted the requisite due diligence, what is the issue?  If the lender has a perfected security interest in personal property or a properly filed mortgage on real estate and the value of that collateral supports the potential repayment of a defaulted loan, why worry?

Unfortunately, even if the collateral is strong and the loan papers impenetrable, a lender may have to battle Uncle Sam if the Department of Justice files a forfeiture complaint against your collateral.

That’s correct—against your collateral, not your customer.

Your borrower may already be in jail—or on the run.

How you could hit trouble

Assume the following facts:  ABC Inc. is in the business of renting residential properties with more than a dozen multi-family pieces and a dozen single-family residences. None of the properties are encumbered.

Town Bank makes a term loan of $2 million to ABC secured by a pool of a portion of the real estate assets. ABC insisted on very light financial covenants and instead agreed to a borrowing base that would require ABC to mortgage enough real estate to maintain a loan-to-value ratio of not less than 40%. The base is tested quarterly using recent appraisals. The loan was funded on Nov. 1, 2012 and additional real estate, a single-family home, was added to the collateral pool on July 15, 2013, to meet the borrowing base requirement.

Now here’s the rub. ABC began laundering money for a drug cartel in February 2013, and starting June 5, ABC allowed, for a significant fee, the single-family home to be used as a meth lab.

The bank’s analyst visited the home on July 1, 2013, and reported in her notes that the appraisal seemed to amply support the value of the home. But she added that there were suspicious characters renting the home carrying away packages and there was one room in the home to which the tenants did not allow her access. She suspected that drug-related activities may be taking place. The bank’s senior lending officer challenged her “speculation” and the additional collateral was approved without further inquiry.

In late August, the US Attorney announced that ABC had been indicted on a number of federal charges that include money laundering and that the United States has filed a civil forfeiture complaint seeking to forfeit all of ABC’s assets. The bank’s senior management expresses shock and dismay at this turn of events because they had no clue that ABC itself was involved in any illegal activities and assumed that the suspicious tenants were acting on their own without ABC’s knowledge. The senior lending officer had assured the CEO and the board that the bank was very well secured and would ultimately collect the entire debt, including default interest, from its considerable collateral.

The statutes recognize that there may be third parties who may have a legitimate claim to the tainted property. Those parties are referred to as “innocent owners.”  A bank holding a mortgage on real estate (or a security interest in personal property) that is subject to a forfeiture complaint may claim innocent owner status and will have to prove by a preponderance of the evidence that it meets the requirements of an innocent owner. The statute (18 USC Section 983) provides the framework for notices, claims, standards of proof, and other procedural matters.

What is an innocent owner?

The forfeiture laws were substantially revised in 2000 pursuant to the Civil Asset Forfeiture Reform Act of 2000 (CAFRA).

If the secured creditor acquired its mortgage/security interest in the tainted property before the illegal activities took place, the creditor will be deemed an innocent owner (to the extent of its security interest).

If the secured creditor acquired its mortgage/security interest after the illegal activities have taken place, the innocent owner test is somewhat more complicated.

In such a situation, the secured creditor must prove that at the time it obtained its security interest it was a “bona fide purchaser for value” of the tainted property, and that the creditor did not know and was reasonably without cause to believe that the property was subject to forfeiture.

It is clear that the CAFRA bifurcation between pre- and post- illegal conduct requirements is based on the political decision that a criminal should not be able to benefit by transferring his property to his spouse, child, or other associate in an effort to thwart the forfeiture statutes.

Accordingly, a claimant must demonstrate that the security interest was the result of an arms-length transaction—and the claimant must have given “value” in the deal to achieve the statutory threshold. The knowledge element of the test seems much more subjective and will be driven by the specific facts of each case.

For purposes of this writing we will assume that the Department of Justice will be able to prove by a preponderance of the evidence that ABC’s real estate portfolio was directly involved in the company’s money-laundering operations. And with respect to the single-family residence there is no doubt that the home was used to engage in criminal activity.

Town Bank filed its claim as an innocent owner. However, the US Attorney’s office has made it clear to Town Bank that it has “issues” with the bank’s claim and will challenge it.

How will the bank fare in a head-to-head battle with the US over the property serving as collateral?

• Single-family residence:  The bank will likely face a very difficult burden in its innocent owner claim as to the single-family residence. First, it is not clear that the bank gave up anything of value for that property. While it is difficult to question that the initial term loan was anything but bona fide and arms-length, all of the loan was funded in November 2012.

The government will strenuously argue that the addition of that property to the pool was for antecedent debt and that the bank did not give new value at the time the security interest was created. The bank will argue that it would never have made the loan without the borrowing base covenant, so that the value question should relate back to the original funding.

However, even if the bank were to succeed on the test of being a bona fide purchaser for value, the bank’s inaction relating to the suspected drug activity will materially weaken its position. Did the bank “turn a blind eye” to the analyst’s suspicions regarding drug activity on the property?  The analyst’s testimony will likely support a government contention that the bank either knew or at least had reasonable cause to believe that the property may be subject to forfeiture.

First, the loan was made and the mortgages put in place before ABC turned to criminal activities. Consequently, the bank should be able to prove that it did not know of the money laundering activities because it did not have actual knowledge of such activities.

Whether the issues relating to the single family residence might infect the rest of the portfolio is not entirely clear. The government may argue that the suspected drug activities should have been reported to law enforcement or at least to ABC, meaning that the bank did not do all that it could have reasonably done to stop the illegal activity.

The bank would counter by introducing evidence that any suspicion it had related solely to the meth lab activity at the one single-family residence and that it had no reason to suspect that ABC knew of or condoned its tenant’s activity or, even more important, that ABC was involved in money laundering using the remaining rental properties that were mortgaged to the bank.

It should be clear from the above that a bank customer’s illegal activities may have direct financial repercussions beyond the compliance-related issues that are front and center of any robust bank KYC/BSA policies and procedures.

Banks should not rely solely on their documentation, lien status, and collateral value in analyzing their realistic position when faced with a borrower that is alleged to be involved in criminal activity. And banks should be prepared to act when learning of facts that may jeopardize their collateral from a forfeiture perspective.

The facts may not be of the type that would cause the bank to file a suspicious activity report. And it is not clear that filing a SAR, by itself, would be sufficient to meet the burden of doing “all that reasonably could be expected” of the bank under the particular circumstances.

Jose Sirven is a partner of Holland & Knight LLP and heads the firm's Financial Services Practice Group.  Mr. Sirven's practice includes the representation of lenders in connection with secured and unsecured credit facilities to borrowers in a number of industries, including cross-border transactions and transactions involving esoteric collateral such as fine art.