As the financial services industry continues to adapt to new regulatory and management priorities in the wake of the economic slowdown, changing practices and policies inevitably affect the value of various skills in the banking workforce. The effects of these shifts can be seen in the Crowe Horwath LLP Financial Institutions Compensation and Benefits Survey, an annual study of compensation trends and practices in financial institutions across the U.S.

This article, the second in a series exploring the 2013 survey results, examines which jobs reported the greatest increases and decreases in compensation over the past year. It also compares current compensation levels with those reported at the low point of the recession in 2009.

Beyond a listing of winners and losers, however,  in this installment we also examine some of the broader industry trends that contributed to these changes in position. Recognizing and understanding these issues can help financial services organizations more effectively adapt to today’s changing marketplace for talent.

Exhibit 1 shows changes in both base pay and total compensation for certain selected jobs in financial institutions. While the survey included other positions beyond those shown here, the jobs depicted in Exhibit 1 are those for which there were the highest number of responses, and thus can be considered the most representative of the industry. 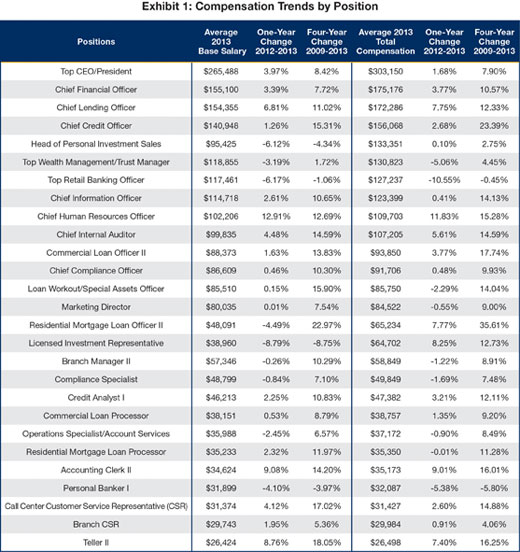 On the other hand, the one-year change for both residential and commercial loan officers is much less impressive. The strong immediate bounceback from the 2009 low appears to be moderating.

The chief credit officer position also shows a strong increase over the past four years, demonstrating that the industrywide focus on credit quality continues.

At the other end of the scale—jobs that lost ground—the positions that lost the most ground over the past four years are those that provide investment-related services to bank customers. The past year was especially difficult for positions such as personal banker, head of personal investment sales, and licensed investment representative. Bankers in all of those posts saw base salaries decline from 2012. These declines were offset somewhat by slight improvements to total compensation, which presumably reflects a continuing shift to more performance-based incentives.

Looking behind the numbers

Beyond the specific winners and losers, the 2013 survey also offers the opportunity to examine broader questions. For example, while the top retail banking officer position shows a steady decline in base pay and total compensation, the reasons for this decline are not readily transparent.

One likely cause is continuing industry consolidation. In its most recent Quarterly Banking Profile, FDIC reports the total number of insured institutions in the U.S. dropped below 7,000 for the first time in the second quarter of 2013, even as total deposits rose. The 13% decline—from 8,012 reporting institutions in 2009 to 6,940 in mid-2013—undoubtedly contributed significantly to a decline in demand for people who can fill the top retail banking officer position.

Anecdotal accounts indicate that a generational shift might also be occurring in this area. As top retail bankers retire, their replacements typically have less seniority and are compensated at lower levels. This is another likely explanation for the fact that the one-year drop in pay and compensation is greater than the four-year drop.

Technology also plays a role in compensation trends. The growth in online and mobile banking has led to a general decline in traffic in bank branches. The result is fewer employees, as reflected in flat or declining pay for several retail and branch-level sales and customer service positions, as shown in Exhibit 2. 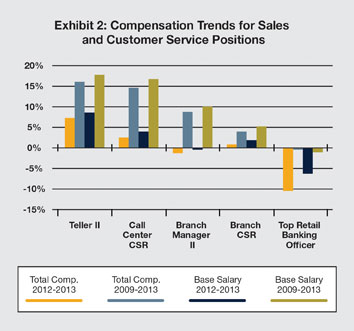 The downward trend is not universal, however. More experienced tellers enjoyed a sizable boost in average pay and compensation, suggesting that institutions are engaged in rightsizing, rather than simple downsizing. There might be fewer people in teller positions, but those who remain appear to be higher performers.

Note also that pay scales are increasing for customer service positions in call centers. As customers make fewer branch visits, call center customer service representatives are being called upon to handle a wider variety of duties, including providing some basic level of technical support for online and mobile customers. As their responsibilities have diversified, their base pay has increased.

There is no doubt that regulatory compliance has been an overriding concern in most banks in recent years. At first glance, however, pay scales for certain compliance-related positions do not appear to reflect this. Average pay and compensation for the chief internal auditor and chief compliance officer positions grew modestly from 2012-2013, but the average pay for compliance specialists actually declined over the past year, and is up only slightly over four years. 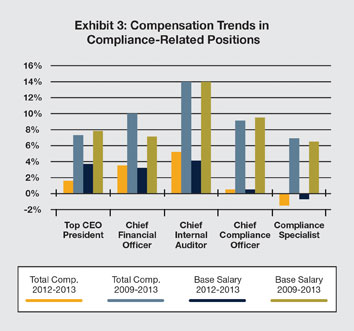 Finally, while the basic laws of supply and demand account for some of the salary trends reported, their effects are not always as direct as one might expect. Other, less obvious factors are also at work.

For example, there is some evidence of upscaling, as more experienced personnel retain their positions, and are rewarded with greater responsibilities and compensation. This could explain why experienced accounting clerks (“accounting clerk II”) have seen a fairly healthy increase in both average base pay and total compensation, while other back-office functions have not.

In the next article in this series, we will examine changes in executive compensation in the financial services industry over the past four years including trends in incentives, equity, and executive perquisites.