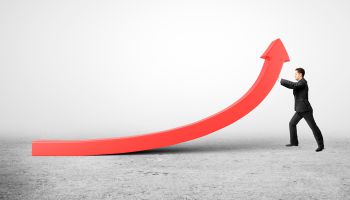 The number of bank deals that would require deeper scrutiny by the Federal Reserve will drop significantly following the Fed’s decision to relax the asset size parameters it uses to help decide which pending deals could present possible risks to the stability of the banking system.

As part of the Fed's March 16 approval of the merger between Bridgeport, Conn.-based People's United Financial Inc. and Riverhead, N.Y.-based Suffolk Bancorp, it announced that it would widen the asset size range of banking firms that could be presumed not to raise material financial stability concerns.

The Fed had been mandated by the Dodd-Frank Act of 2010 to consider "risk to the stability of the United States banking or financial system" when considering whether to approve bank mergers that come under its purview.

Reviewing potential financial stability risks was added to the Fed's list of items it already examines in bank transactions, which include CRA performance of the banks, effect on convenience and needs of communities served, and competitive considerations.

The Fed said that beginning with its approval of the Suffolk Bancorp sale, it would presume that merger proposals that involve an acquisition of less than $10 billion in assets, or that result in a firm with less than $100 billion in total assets, are "generally not likely to create institutions that pose systemic risks."

Suffolk had assets just over $2 billion as of Dec. 31, 2016, and the combination with People's United would create a firm of $42.70 billion, based on summation of the companies' year-end 2016 assets.

As pointed out by research firm Compass Point, "the Federal Reserve has removed a hurdle in the M&A process for regional and community banks, which should serve as a concrete signal that the regulatory environment for consolidation is improving." 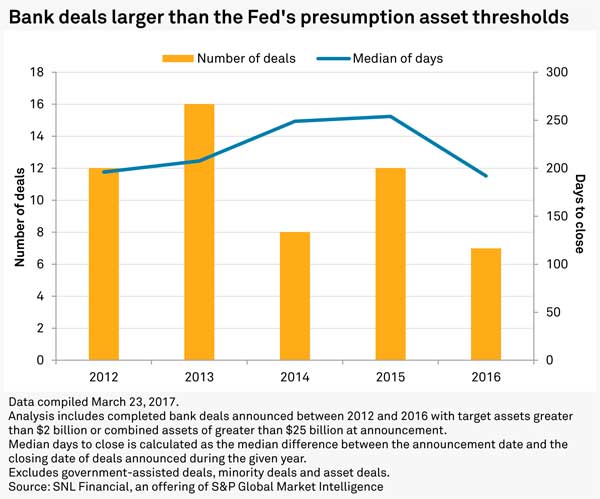 The Fed first disclosed the presumption thresholds in its 2012 order approving the $8.98 billion acquisition of ING Bank FSB by Capital One Financial Corp.

Metrics that the Fed considers when examining risks to the financial system include: Interconnectedness with the financial system; complexity; cross-border activities and the unavailability of substitute providers for any of the critical products and services offered by the resulting firm.

In the approval of the People's/Suffolk deal, the Fed said that in the years since the Capital One approval, "proposals involving an acquisition of less than $10 billion in assets, or that result in a firm with less than $100 billion in total assets, are generally not likely to create institutions that pose systemic risks."

It continued, "Transactions below either of these asset thresholds have typically not involved, or resulted in, firms with activities, structures, and operations that are complex or opaque."

According to SNL Financial data, only one announced bank deal with target assets greater than $2 billion or combined assets of greater than $25 billion did not successfully close: New York Community Bancorp Inc.'s failed acquisition of Astoria Financial Corp., which was terminated in December 2016.

While the deal was held up due to regulatory approval, the companies haven't revealed the specific regulatory concern that caused the roadblock. The companies terminated the deal before regulators issued a decision.

The number of pending bank deals that cannot be presumed to be safe for the financial system will decline by more than half with the Fed's order.

Among pending bank deals as of March 22, 14 would not have been small enough under the 2012 asset parameters to be presumed to not pose a financial stability risk. That number goes down to four deals under the new parameters: Toronto Dominion Bank's $1.3 billion deal to acquire Scottrade Bank from Scottrade Financial Services Inc.; EverBank Financial Corp's $2.51 billion sale to Teachers Insurance and Annuity Association of America; Canadian Imperial Bank of Commerce's $3.83 billion takeover of PrivateBancorp Inc.; and Sterling Bancorp's deal to buy Astoria Financial Corp. for $2.23 billion. 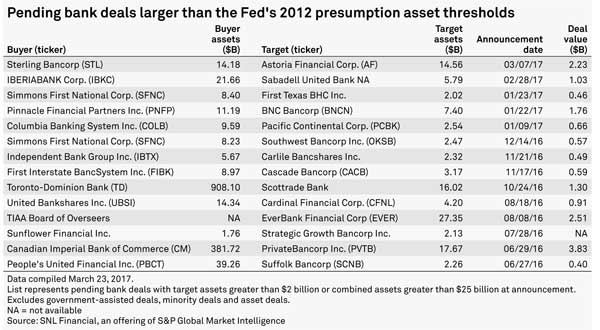