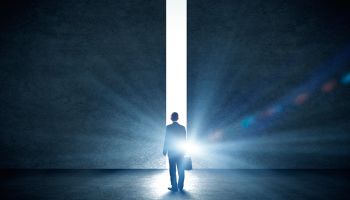 Guttau may hold the CEO title at a community bank headquartered in rural Treynor, Iowa (population: 919), but he considers himself a business owner and investor, who happens to operate within the banking industry.

That distinction encouraged Guttau to look for ideas and strategies outside traditional banking peer groups. He joined Vistage, an organization that runs advisory groups for CEOs worldwide, four years ago.

Explains Guttau: “I believed that other industries were ahead of banking, and although these industries aren’t an apples-to-apples comparison, I knew I could learn from them.”

Trey Maust, cofounder and copresident/CEO of Lewis & Clark Bank in Oregon City, Ore., also was looking to gain perspective from outside the banking industry. Maust and cofounder Jeff Sumpter started the bank in December 2006, and they were eager to get input from a diverse group of entrepreneurs and CEOs.

Maust, like Guttau, is a member of Vistage. Maust also is a member of Strategic Coach and of the Entrepreneurs’ Organization (EO). The latter group, says Maust, was especially helpful during the bank’s early stages.

“EO helped me think strategically about how to effect change,” he says.

At this point in the bank’s growth trajectory ($180 million in assets), Maust finds Vistage the most helpful.

“The peer group is like having a board of advisors to bounce ideas off and to get insights on how to approach a challenge from a business perspective. I can then layer on what we need to do to meet our safety and soundness requirements,” he explains.

Each Vistage peer group includes a chair and 15 members from a wide variety of industries. The group’s personality varies depending on the chair and the members. Guttau’s group includes one life insurance business and a financial planner, but the rest of the members are in services and manufacturing businesses.

Peer groups meet monthly. In the morning, members hear from an outside speaker. After a lunch break, group members share the progress they’ve made on professional and personal issues as well as challenges they are currently facing and other topics they want to discuss. The chair facilitates the afternoon roundtable discussion.

Since being off-site pulls him away from daily distractions, Maust credits the meetings with giving him time to think strategically.

Prior to a monthly meeting, Guttau often frets if he can really afford to spend a day away from the bank. Laughing, he says: “But within 30 to 60 minutes of the start of the meeting, I realize that this is exactly what I need. It allows me to reset my clock.”

Guttau and Maust both note that membership in groups such as Vistage are not inexpensive, but they say the benefits outweigh the costs.

For Maust, his participation in the Vistage peer group helped define Lewis & Clark Bank’s approach to its market. One example of this is its website. Even though the content on the website is in line with content found on other bank websites, the presentation is decidedly hip and nonbank-like. 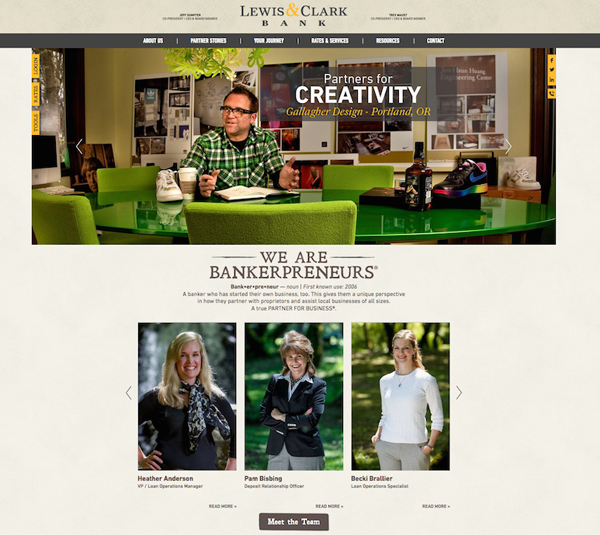 Yes, this trendy website belongs to a bank. Lewis & Clark Bank's Trey Maust was encouraged to step out of the box at a nonbanking group's meeting. Click on the image to visit the site.

Conversations with group members also have helped Maust define what his bank’s customers and potential customers want from a financial institution.

Lewis & Clark Bank is exploring digital platforms and a shift in its deposit strategy—something the bank was reticent to do without input.

“The group acts as a sounding board and as a focus group,” points out Maust. “They help ensure that our perspective is grounded.”

However, to get the most out of the investment, you must be open to new ideas.

“A cross-industry peer group is great if you are willing to think of your institution as a business, rather than just as a bank,” says Guttau.