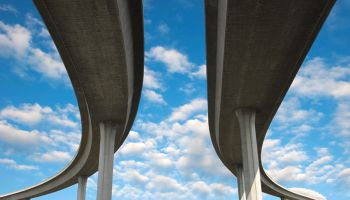 Pacific Premier Bancorp Inc. is searching for the deal or deals that will bring it within striking distance of $10 billion in assets or vault it over—and there are plenty of options to consider.

Executives at the Irvine, Calif.-based bank reiterated their acquisitive interests during the bank's first-quarter earnings call April 25, shortly after closing its Heritage Oaks Bancorp deal that increased its assets to approximately $6 billion.

The larger size means bigger deals; at the time Chairman, President, and CEO Steven Gardner stated a range for targets of between $500 million in assets up to $7.5 billion. The acquisitive bent has implications for the bank's geographic footprint as well as its march upward to $10 billion in assets.

In an interview, Gardner said the bank's primary focus is in Southern California. Management would consider banks in the central coast, central valley, and northern parts of the state, but those targets would need to have $1 billion in assets so that the company has scale in those markets right away. Pacific Premier is primarily interested in targets focused on business customers with large non-interest-bearing deposit bases.

While Gardner said he is interested in targets with up to $7.5 billion in assets, he is not interested in a merger of equals, mostly because he does not think they exist. Even if Pacific Premier partnered with a larger bank, it would still be the acquirer.

"We don't believe MOEs exist—they don't from an accounting standpoint and they don't, from our standpoint, work particularly well," he said. "In my mind, it's someone acquiring someone else."

Pacific Premier's newfound scale makes it "clearly agnostic" about deal size, a change that is "relatively new" for them, said FIG Partners research analyst Timothy Coffey. He said the bank is evaluating all options, including a series of small deals to march them into midsize bank territory or one large deal. Adding Heritage Oaks' geographic footprint also expanded the number of potential targets.

"A lot of people are talking, especially down in that Southern California marketplace," FIG Partners' Coffey said. "The Heritage Oaks deal really expands their footprint, so they can consider deals closer to where Heritage Oaks was based and not in their traditional footprint."

One factor that could influence the outcome of Pacific Premier's M&A ambitions is the increase in share prices following the November 2016 presidential election that has made proposed deals at a higher valuation more attractive and feasible.

Acquirers such as Pacific Premier could be more amenable to paying a richer valuation for a target, which could open more doors for potential partners. Gardner acknowledged that Pacific Premier has "one of the highest multiples in the country." But he said a disciplined acquisition approach is one reason why the currency has appreciated, and that philosophy would not change in future transactions. 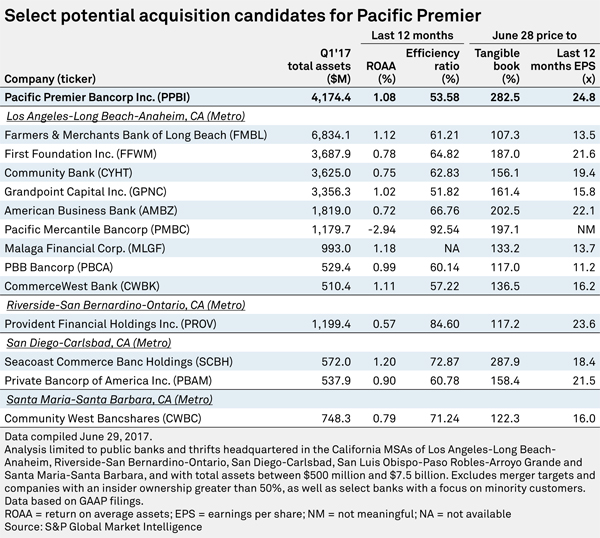 Pacific Premier's acquisitive bent also could bring it ever-closer to the $10 billion asset threshold, which would subject it to stress testing and direct supervision from the Consumer Financial Protection Bureau.

Gardner said management has been preparing for "a couple of years" for the threshold and has made improvements to the company's enterprise risk management structure and Bank Secrecy Act and anti-money laundering systems. In fact, Pacific Premier already runs "a lot" of the Dodd-Frank Act stress test with a third party.

"We're continuing to build, so that as opportunities come up like an acquisition to potentially go past $10 billion, we're fully prepared for that," he said.

Crossing $10 billion would also subject the bank to the Durbin amendment, which would reduce the bank's debit interchange income and is one reason why many banks choose to merge over the threshold. But Gardner said interchange revenue is only about $2.5 million a year, which is "fairly small" for a bank the size of Pacific Premier.

"That's reflective of the fact that we don't necessarily bank a lot of consumers," he said. "Even if we get to $10 billion and surpass it and the interchange fee income does get impacted, we think there's an opportunity for us to grow it regardless, simply because it hasn't been much of a focus for the bank anyway."