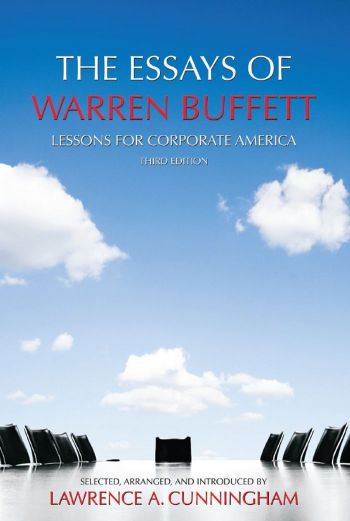 Throughout a corporate Chairman of the Board's life, many statements are made in various forms. Only very few of these remarks are considered worthy of a published book. An exception has to be when Warren Buffett is making the remarks.

The Essays of Warren Buffett: Lessons for Corporate America is a third edition of Mr. Buffet's letters to shareholders. This 2013 edition contains recent letters and provides a fascinating review of Buffet's philosophy of corporate management.

These essays are not just thrown together, but are selected, arranged, and introduced by Lawrence A. Cunningham, the Henry St. George Tucker III Research Professor at George Washington University Law School. He has written numerous books including The AIG Story, coauthored with Hank Greenberg.

Setting up the feast

In a helpful introduction, Cunningham carefully explains who Warren Buffett is, what his motives were for writing the essays that follow, and Buffet's view of his work at Berkshire Hathaway. Also Mr. Buffet's style of writing is summarized and outlined.

Cunningham explains the corporate culture and construction of Berkshire with such observations as:

"Buffett views Berkshire as a partnership among him, Munger [Berkshire Vice-Chairman Charlie Munger] and other shareholders, and virtually all his net worth is in Berkshire stock. His economic goal is long-term--to maximize Berkshire's per share intrinsic value by owning all or part of a diversified group of businesses that generate cash and above-average returns. In achieving this goal, Buffett foregoes expansion for the sake of expansion and foregoes divestment of businesses so long as they generate some cash and have good management."

The introduction is very well written and enhanced this collection. I was not completely knowledgeable about Buffett or Berkshire, even though Buffet's market comments, major stock trades, and political opinions are very well covered in the news. The introduction provided an excellent overview of what was to follow and provided context for the essays.

An interesting feature: Following the index is a Concept Glossary, which defines some of the terms used throughout the book. This short glossary defines such unusual terms as "cigar butt investing" and "owner earnings."

Following the definitions is the Disposition Summary and Table at the very end, a means of quickly tracing various solid aids in the essays for reference and learning from the man whom some call the "Wizard of Omaha."

Digging into the essays

Many of the questions that a typical investor would have are addressed in Buffett's essays. I particularly liked his opinion of buying gold as an investment. This can be found under "Investment Alternatives," sub category "Surveying the Field."

He introduces the topic by citing the madness for tulip bulbs in the 17th century, and my anticipation for Buffet's view on the topic grew immediately. His comparison of "Pile A" and "Pile B" was very descriptive helped prove his point.

Pile A is a cube, 68 feet per side, representing the world's gold stocks. It would fit inside a baseball diamond.

Pile B, on the other hand, representing purchases equivalent to the dollar value of that cube of gold, consists of the following: all U.S. cropland, and its output; 16 Exxon Mobils; plus $1 trillion in "walking-around money."

The essays' wide variety of topics seems to confirm that Buffett is quite comfortable in his place with the business world. For example, with clarity and strong opinions, he surveys junk bonds, the housing market, mergers, accounting principles, foreign stock and currencies, and boards of directors.

The essays are also a method to seek additional companies to be bought by Berkshire but done very tactfully: "I will not pester you; if you have any possible interest in selling, I would appreciate your call."

It almost sounds like someone wanting to buy a neighbor's lawn mower.

Throughout the essays there is a description of the type of stockholder Buffett is looking for and it appears he is quite pleased with the vast majority of those who own Berkshire stock. It is evident Buffett truly appreciates those in partnership with him as owners of Berkshire and he writes in a genuine and easy style. Having read many annual reports, I found clear that Buffet's approach to his shareholder audience and their expectations to be very different from that of the typical chairman of a publicly traded company.

It is also clear that Buffett knows his shareholders very well--much like family.

He is very open with the positive and negative actions he and the management team made on behalf of the company. Buffett is especially candid about errors of judgment.

Describing his timing of investing in USAir, Buffett writes:

"Your Chairman displayed exquisite timing: I plunged into the business at almost the exact moment that it ran into severe problems."

This type of a relationship, with the good and bad being shared without hesitation, is a relief in today's corporate world of spinning the news to management's advantage.

There is no question that Buffett believes Berkshire is the best investment possible. In the chapter called "Common Stock," the book includes an essay called "The Bane of Trading: Transaction Costs." This section provides an example that would make most financial advisors and hedge fund managers cringe. Buffet's example of the "Gotrocks" family and their horrid experience with the fast-talking "Helpers." It's a situation with which an average investor would easily identify.

The Berkshire investment is seen by its Chairman as a well-diversified portfolio that does and will continue to fulfill the equity allocation.

How about a discussion on why falling stock prices is not a bad thing but really to be celebrated by the active investor? This theme appears in several of the essays but is one topic that I believe would be difficult to make many investors believe. Many investors do not have an unlimited source of capital and like to see their investment growing in value.

Is he a good Wizard?

So are Warren Buffet's philosophies the true answer to any investor's question of how to grow wealth?

It is not really feasible that we all count on Buffet's guidance for our investment, but his reasoning seems logical. Perhaps it is his style of writing or his willingness to take on any topic and be very transparent in the explanation that is so convincing. Or perhaps it is simply because it makes sense. He even writes on what would happen if he were hit by a bus, an obvious question on the mind of most if not all shareholders of Berkshire.

I did not completely agree with every point being made in these essays. But they certainly do raise questions, and in many instances provide a breath of fresh air in the stale world of corporate communication.

Some of the essays are a bit dated in this ultra-fast world of finance and corporate politics, but overall the collection makes a great read.

This is a book I will want to read again when I want to see an out of the ordinary, but logical opinion.