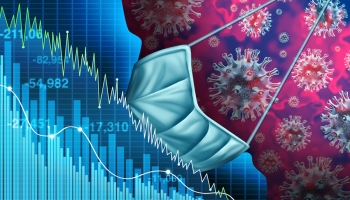 The COVID-19 coronavirus pandemic has hit the income of 59% of US adults, according to a survey by First National Bank of Omaha.

The poll of more than 1,000 people found that 45% reported difficulty paying bills, while 52% said they did not have enough savings to cover three months with no income.

More than four in five respondents (83%) had not talked to their bank about relief options, the survey reported.

This was despite a range of measures being introduced for customers by banks across the US, including payment deferrals, fee waivers, and removal of penalties.

March saw the largest month-on-month increase in the US unemployment rate since 1975 as the economic impact of the pandemic took hold and companies laid off staff. There were 7.1 million people unemployed at the end of last month, according to the US Bureau of Labor Statistics, an increase of 1.4 million since the end of February.

Two in five (42%) respondents reported being unemployed, and less than a third (31%) of those that were employed said they were confident about their job security.

The Internal Revenue Service started sending out “stimulus checks” over the weekend – grants of up to $1,200 for individuals and $2,400 for couples, with families eligible for $500 per child aged under 17.

The First National survey found that, of those expecting to receive such support, 38% planned to use it to pay “necessary expenses” while 21% planned to put it into savings. A further 15% said they would use the money to pay down debts.

“Unemployment is at an all-time high and may continue to climb, bringing with it financial struggles that many Americans have not faced before,” said Sean Baker, executive vice president of retail banking at the First National Bank of Omaha.

“Those in need should focus stimulus check funds on paying essential bills. At the same time, if your budget allows, we encourage all individuals to help stimulate the economy by shopping local, wherever you can.

“It’s important to be financially savvy and well informed at all times, and we encourage Americans to reach out to their banks for the tools and resources they have available to help navigate these unprecedented times.”

Despite the difficulties faced by so many, First National’s survey also found that two thirds (66%) of respondents were making a greater effort to shop at local businesses, while 45% said they were tipping more than normal.

A previous survey by the bank found that 49% of US adults expected to live “paycheck to paycheck” in 2020.

A separate study, conducted by TIAA Institute and George Washington University School of Business before the pandemic, found a “slight improvement” in Americans’ financial literacy year-on-year.