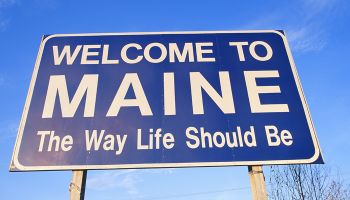 In a state with substantial economic challenges, Maine-based banks have to be opportunistic to find avenues for growth.

"We don't necessarily participate in the big booms that the national economy may have, but we don't usually get hurt really hard by the big busts," said Camden National Bank President and CEO Gregory Dufour, who chairs the Maine Bankers Association.

One of the biggest challenges facing the state is the cost of doing business, especially energy costs, according to Maine Gov. Paul LePage. He said Maine has the 12th highest energy costs in the U.S., although the lowest in New England.

The governor also emphasized the need for better workforce development, especially in the science, technology, engineering, and mathematics fields. Other sources also mentioned the importance of making Maine a better environment for young people to work, as well as the challenges posed by energy and transportation costs.

Sources discussed the issue of poverty in Maine, where more than a tenth of residents lived below the poverty line and nearly a third of people had a household income that classified them as poor or near-poor, according to the state's 2012 Report on Poverty. Andrew Ketterer, a former Maine attorney general, observed that there are motivational issues, especially in parts of the state where many people have to drive long distances to low-wage jobs.

Governor LePage, who is up for re-election in November, wants to bring high-powered manufacturing, particularly in the aerospace and automotive sectors, to Maine. He identified precision machining and metalworking capabilities as strengths for the state.

In the meantime, bankers look for business opportunities where they can find them.

Southern and coastal Maine tends to fare better economically than the northern counties. June unemployment rates by county, not seasonally adjusted, ranged from 4.1% in Cumberland County, whose county seat is Portland, to 7.7% in the rural counties of Aroostook and Washington. Maine's unemployment rate was 5.1% in June, lower than the U.S. rate of 6.1%. The rate fluctuates significantly by season, however, due in part to employment in the seafood and tourism industries. 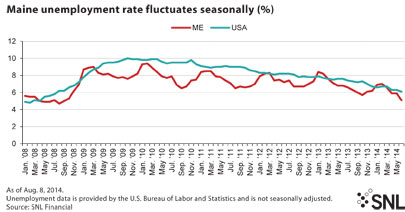 Camden National is based in the coastal town of Camden, about 80 miles northeast of Portland. Based on the FDIC's Summary of Deposits as of June 30, 2013, (on a pro-forma basis, adjusted for any openings and closing and for any mergers and acquisitions), the $2.7 billion bank ranked fourth in deposit market share in Maine, with approximately 7.9% of deposits, behind Toronto-Dominion Bank, KeyCorp, and Bangor Bancorp MHC.

Dufour's institution does a lot of "bread-and-butter small business loans," but lending opportunities can range up to about $30 million. Camden National saw double-digit growth in residential construction, multifamily, and commercial and industrial loans on both a sequential and year-over-year basis in the second quarter, according to SNL data. Most large commercial development projects happen in the southern part of the state, which benefits economically and demographically from its proximity to New Hampshire and Massachusetts.

Maine's more rural and northern counties also contain some noteworthy business opportunities. Deposit products are projected to grow at a compound annual growth rate of 3.29% in Aroostook County and 2.79% in Washington County between 2013 and 2018, according to financial product demand data from Nielsen.

These are two of the highest projected growth rates in Maine at the county level. Only six out of 16 counties are expected to see deposit growth rates of more than 2% over the same period, including Penobscot County, whose seat is Bangor.

On the lending side, one project that stands out to Bangor Savings Bank Executive Vice President and Chief Strategic Officer Yellow Breen was involvement in a multimillion-dollar financing effort for the Downeast Lakes Land Trust, a nonprofit organization dedicated to the conservation and management of forests and waters in the vicinity of Grand Lake Stream, Maine.

"We were able to develop some expertise and an appetite for doing [NMTC] deals, which I daresay many community banks don't do and have not done," Breen said. Bangor Savings Bank has done several other NMTC deals as well.

"It was really a huge win to be able to use unconventional tax credit financing to facilitate active timber purchase, conservation easements, workforce housing and really enable the Downeast Lakes Land Trust to achieve their goal," he said. He sees this as a prime example of how a $3 billion bank can bring its scale to bear in a way that is attuned to local needs and opportunities.

As in other parts of the country, Maine's banks face competition from big banks and credit unions alike. Beyond a few dozen Maine-based banks and thrifts, there is a substantial credit union presence and, of course, the larger players like TD, KeyCorp, and Bank of America Corp. But when one of those institutions pulls back, the local players are ready to step in.

Camden National acquired 15 branches from BofA in 2012. As Dufour put it, in one day Camden National was able to acquire hundreds of millions of dollars in deposits and almost 30,000 customers.

"There's no way I could have achieved that organically in the state," he said.

Bangor Savings Bank had also been interested in the BofA branch sale but faced some deposit concentration issues. Now the company is staying attuned to expansion opportunities, especially in the south, although Breen does not expect to see many branch divestitures in that more economically lively region. Camden National also wants to remain opportunistic and position itself as a buyer of choice.

"There's not a lot of margin for error in a state like Maine," said Dufour.