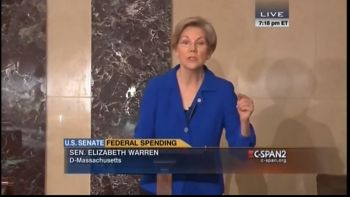 “There’s really not much that indicates we’ve learned anything new over the last several cycles,” says veteran lender and CEO Ed O’Leary. He aims to fix that through his long-running Banking Exchange blog.

These days have been busy ones for bankers trying to figure out the financial landscape in view of the sharp drop in oil prices. More immediately, there’s the near collapse of the ruble and the possibility of contagion in international financial markets with the potential of destabilizing the financial order well beyond our borders.

Most all bankers know about Sen. Elizabeth Warren’s strong attacks on Citigroup from the well of the Senate in recent days. (She did it twice, actually, once as a tag on to a more general statement, and later much more directly [video].) The occasion of the Massachusett’s Democrat’s speeches was the debate on the $1.1 trillion government-spending bill to operate the government through the end of the fiscal year next October.

A last-minute “end run” attributed to Citigroup but favoring a handful of giant domestic banks and in particular J. P. Morgan took the form of an appendage to the spending bill repealing a provision of Dodd-Frank. Under the original language of Dodd-Frank, effective in 2015 non-loan related hedging activity would not have been permitted by a bank. With the change adopted the other day, this provision was removed.

Derivatives are a generic term for a variety of financial instruments. These range from “plain vanilla” options to complex instruments such as credit default swaps that received considerable notoriety in the financial crisis of 2008 and 2009.

These types of derivatives, large notional amounts and complex by nature, figured prominently in the federal government’s $85 billion bailout of AIG in 2008. McKinsey & Co. has estimated that the implementation of this provision of Dodd-Frank would have impacted only about 5% of the notional amount of banks’ total derivative trading. However, U. S. banks, and in particular a handful of giant institutions, would lose about 35% or $4.5 billion of the $13 billion in derivative revenues that those banks earned last year.

The ultimate cost of a derivative hedging transaction is determined by the issuer’s credit rating. Generally, a bank’s credit rating by national rating agencies is higher than its holding company’s rating or those of other affiliated companies.

When a bank issues a derivative instrument, it carries a higher credit rating than if that same instrument had been issued by one of a bank holding company’s non-banking subsidiaries—and it is priced reflecting the level of risk of the issuer.

The banking industry has consistently argued that pushing certain credit swap derivatives out of insured banks creates additional risk by virtue of their being lodged in only lightly regulated affiliated companies. This is at least a plausible response but the cynical advice of “follow the money” seems more persuasive.

Senator Warren’s ire seems centered on two issues: “Too Big To Fail” and concentrations of economic power among banks and bankers in the TBTF category of institutions.

It’s considered a fact of economic life that some banks are simply too large to be permitted to fail. But also, it is commonly agreed, in the manner of unwinding such an institution’s business, the taxpayer should not be on the hook. A primary tool to limit financial risk in banking is to build firewalls between banks and riskier activities by pushing out to uninsured entities those activities that by their nature exacerbate the degree and level risk.

I first recall hearing the TBTF arguments during the credit quality difficulties of Continental Illinois, the very large Chicago bank of its day that was in considerable distress and ultimately failed due to soured energy loans in the mid-1980s. Dodd-Frank contains several provisions designed to eliminate or minimize the risk to the American economy and the costs to taxpayers of the failure of a very large financial institution.

The issue of the concentration of economic and political power is an old and durable one that is often discussed in terms that economists label as “oligopolistic.”  An oligopoly is defined as a market dominated by a small group of sellers. That’s beyond our purposes here to discuss. But the issues are familiar and the subject of active debate and discussion in business today. In fact, they have been a durable topic of debate over the last hundred years or more of our history, no matter what specific label is applied.

What makes Senator Warren’s attack in the Senate last week on Citigroup [video] so “interesting” is the candor and the directness of her language:

“There’s a lot of talk coming from Citigroup about how the Dodd-Frank Act isn’t perfect. So let me say this to anyone who is listening at Citi: I agree with you. Dodd-Frank isn’t perfect. It should have broken you into pieces.”  (Emphasis added.)

A day or two later, Sen. Bernie Sanders (Ind.-Vt.) announced that he would introduce legislation in the next session of Congress to break up the big banks. So this will likely be a lively year to come for the banking industry. And the presidential political campaigns are beginning to take shape for 2016, further seasoning the stew.

Impact on other Dodd-Frank reforms

The derivative issue has been resolved in the sense that the restrictive provisions of Dodd-Frank were repealed.

It’s likely a permanent deed, with any other attempts by the banking industry to modify Dodd-Frank unlikely in the present political climate.

It’s worth noting that community banks hopeful of ameliorating some of the compliance burden of Dodd-Frank took a hit to their expectations this week as well.

We should all watch carefully for indications of distress in the credit markets attributable to the falling price of oil. We may get some idea of how well the reforms of Dodd-Frank may actually work in a stressful environment.

More in this category: « Lubricating impact of falling oil prices An oil lender’s take on the price drop »
back to top