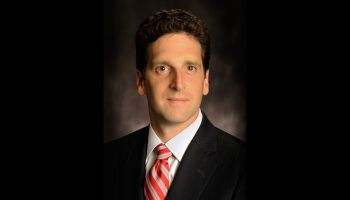 Benjamin Lawsky, soon to exit the New York Department of Financial Services, leaves behind a formidable agency—and one that will likely prove a tough cop for financial institutions for years to come.

Reports began circulating in recent months that Lawsky, who has held the superintendent position since May 2011, would step down sometime in 2015. Lawsky made that official on May 20, saying he would depart the Department of Financial Services in late June, to launch his own legal and consulting firm in New York.

The DFS has collected more than $6 billion in fines from the financial industry during Lawsky's tenure, during which the DFS established itself as a regulatory force that would go aggressively after alleged wrongdoing—and often one that would muscle in on other agencies' investigations of banks operating in New York to grab a piece of a settlement.

That was exactly what the hard-driving and sharp-elbowed Andrew Cuomo charged Lawsky with doing as head of the new agency, according to political consultant Hank Sheinkopf.

Lawsky had previously served as Cuomo's chief of staff, and also as an assistant U.S. attorney in the Southern District of New York, making him an obvious choice in a key role for the closely knit Cuomo circle.

Especially after the financial crisis, "he needed someone who was more of an enforcement figure, and could operate across multiple industries," Sheinkopf said. He added that the opportunity to re-establish a legacy of aggressive policing in the state, combined with Lawsky's background in the southern Manhattan federal prosecutor's office that boasts a tradition of prosecuting financial crime, meant that high-profile cases were a foregone conclusion at the agency.

The new superintendent and his agency made their first major regulatory splash when the DFS accused Standard Chartered Plc of helping the Iranian government launder at least $250 billion and ordered the bank to appear at a hearing and explain why it should not lose its license to operate in New York.

Threatening to take away a charter to do business in New York was a particularly hard-line and potentially punitive step, especially for foreign banks that operate primarily in the U.S. from New York offices. It was a weapon that Lawsky possessed that hung over many of the DFS' other enforcement activities during his time, even if he did not openly wield it in other cases. Ultimately, Standard Chartered agreed to pay a $340 million civil penalty and acknowledged wrongdoing in the case.

Lawsky pursued other global bank misdeeds during his tenure, including joining federal investigations into foreign exchange market manipulations, as well as taking part in a larger settlement with BNP Paribas SA in which the French bank paid an $8.97 billion fine and pleaded guilty to violating U.S. sanctions.

He also tightened regulation of mortgage servicers—the DFS tangled with Ocwen Financial Corp. over its ability to appropriately service its portfolio, and blocked its $2.7 billion deal to acquire mortgage servicing rights from Wells Fargo & Co.—and cracked down on payday lenders.

Living up to Lawsky legacy

And it appears as though the hard-nosed culture Lawsky established at the DFS is likely to outlast him. Sheinkopf said that with the corruption scandals engulfing the state government at the moment, Cuomo will be looking for a replacement that "is at least as competent as [Lawsky] and … concerned about delivering both solid enforcement as well as publicity." 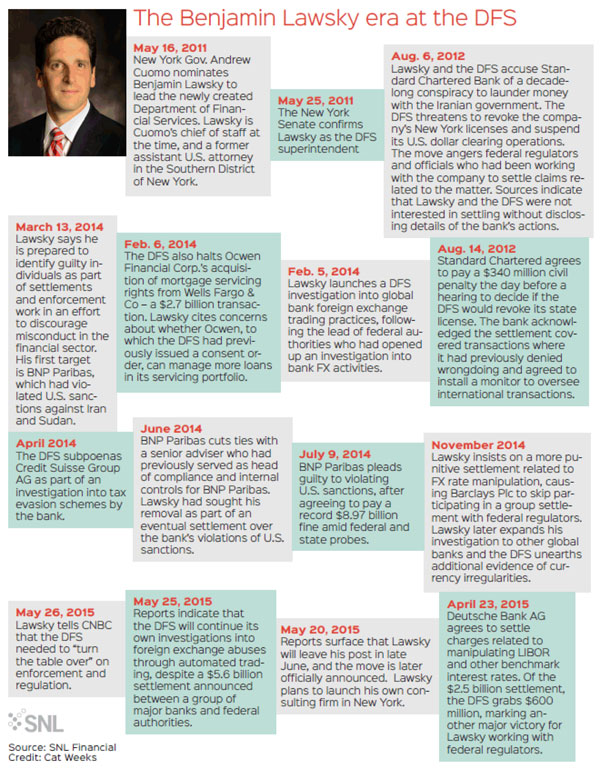 In addition to those positive headlines, Lawsky also generated large amounts of revenue for the state—a key skill Cuomo will look for in a replacement. Compass Point analyst Isaac Boltansky delivered that message to clients in a note following Lawsky's announcement, writing that "our sense is that Mr. Lawsky's vision of a more aggressive regulatory regime has been implanted in the DNA of the NYDFS, which suggests that 1,400+ person agency is unlikely to change course on a dime."

Though Lawsky's tenure has not ended, a recent example is the agency's pledge to continue its own investigation into foreign exchange manipulation probes, even as other regulators inked a large settlement in the case.

That seems to be not just another sign of the agency's tough enforcement—and willingness to extend its own fights even when other regulators will not—but also a clear indicator of its future.

This article originally appeared on SNL Financial’s site as “Lawsky out but little change likely at tough DFS."