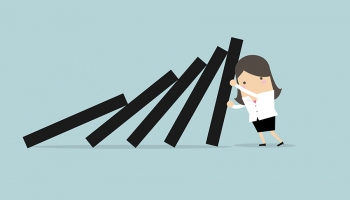 US banks have remained resilient despite the challenges of the Covid-19 pandemic, according to new research from the Federal Reserve.

In its semi-annual monetary policy report the Fed highlighted that banks had reported lower-than-expected losses, while also citing an improved economic outlook. Many banks were able to benefit from holding strong capital positions before the pandemic.

However, the Fed warned that lingering uncertainty from the ongoing pandemic could still have a negative impact on the US financial sector.

“While some financial vulnerabilities have increased since the start of the pandemic, the institutions at the core of the financial system remain resilient,” the report said. “Financial institutions, however, may experience additional losses as a result of rising defaults in the coming years, and long-standing vulnerabilities at money market mutual funds and open-end investment funds remain unaddressed.”

While the Fed observed a “substantial” tightening of lending early in 2020, this moderated in the second half of the year.

However, credit availability has been flagged as “fairly tight” for small businesses, which had led to demand for such credit weakening. The report noted that many small businesses had already been forced to close for good and that the pandemic had brought about many long-term shifts in economic activity, such as online shopping and working from home.

This slump in lending was recorded across the industry with many US banks cutting loans to focus on capital preservation. Data from the Biz2Credit Small Business Lending index revealed this lending had fallen over 50% between December 2019 and December 2020.

Bank lending may have contracted due to lower demand and greater loss mitigation by banks, but profitability levels have rebounded to pre-pandemic levels.