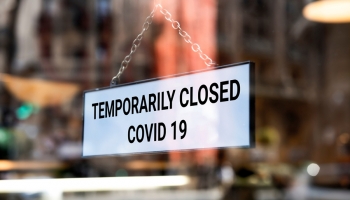 Indefinite economic shutdowns across states could have a significant negative impact on local and regional banking sectors, the Office for the Comptroller of the Currency (OCC) has warned.

Acting comptroller Brian Brooks – who replaced Joseph Otting at the start of this month – has written to organizations including the National League of Cities, the US Conference of Mayors, and the National Association of Governors warning of the adverse impact of measures taken to limit the spread of the COVID-19 virus.

While he acknowledged the “solemn responsibility” of local and regional leaders to ensure that businesses reopen in a way that does not put people’s health at risk, Brooks urged them to “consider these risks carefully and weigh them against the scope and duration of continued lockdown orders in making your decisions”.

"Some measures reportedly planned by some cities and leaders “potentially threaten the stability and orderly functioning of the financial system the OCC is charged by law to protect”, he added.

The comptroller called for more clarity on the definitions of essential and non-essential businesses and activities, to allow banks to plan for potential losses on their loan books.

“Failure to understand, forecast, and reserve for risks based on sound data deprives banks of a key financial risk management tool at a time when their safety and soundness depends on it,” Brooks said.

He also cited “recent news reports” that had suggested some cities were considering cutting off water, electricity or other utilities from businesses that flout social distancing or lockdown measures. He warned that such actions could compromise building integrity, with a knock-on effect on the quality of collateral used to back up real estate loans.

These loans were also at risk from extended ‘stay at home’ orders, Brooks added, as the uncertainty of “essentially indefinite” closures would affect companies’ ability to service their debt.

The OCC has received “anecdotal reports” of banks experiencing delinquency rates in the “mid-double-digits” for small business loans, the comptroller said, despite these loans representing the highest quality and lowest risk debt when they were first originated.

Finally, Brooks warned of the “very real risk” of an increase in bank robberies if requirements to wear face masks are extended for lengthy periods. While such a measure was “prudent” at the height of the pandemic, Brooks said reports of robberies suggested it was not “safe or sustainable on a permanent basis”.

Despite the heightened risks to banks from the responses to the pandemic, Brooks emphasized that banks came into the crisis “extremely well capitalized and with strong liquidity”. This strength was vital to the successful implementation of the CARES Act and related coronavirus relief measures, he added.

Mark Carney, former governor of the Canadian and UK central banks, underlined the importance of well-capitalized banks in an interview this week.

Speaking to IHS Markit’s chairman and CEO Lance Uggla as part of the data provider’s CERAWeek energy conference, Carney said bank liquidity had increased by £1 trillion ($1.3 trillion) in the UK alone since the 2008 financial crisis.

“We like to say that’s ‘prudence with a purpose’,” he said. “It’s ‘resilience with a reason’. It’s not there just to allow me to sleep at night, it’s there for times like this.”

Before Carney left his role at the Bank of England earlier this year, the central bank’s financial policy committee relaxed capital requirements on UK banks to enhance their ability to support the country’s economy.

“When you have the restart you’d have an expectation that would be used,” he said. “Eventually as government starts to pull back, you have fewer of these guarantees, and the banks have the capital.”