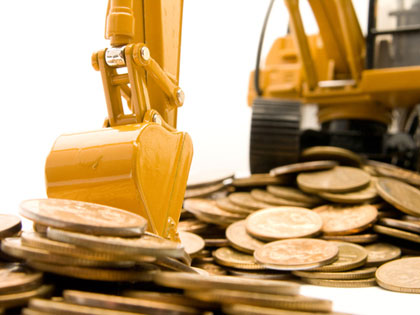 The recently announced sale of servicing assets on more than $300 billion in unpaid principal balance may represent one of the largest chunks to move from the banking system to nondepository servicers, but executives in the specialty servicing sector emphasized that they still see plenty more coming down the pipeline.

Indeed, reports emerging close on the heels of Bank of America Corp.'s announcement of deals with both Nationstar and Walter suggested that the Charlotte, N.C., institution itself is preparing to offload servicing rights to another $100 billion in unpaid principal balance. And another large player is rumored to be shopping MSRs to $122 billion in unpaid principal balance.

Since 2009, the banking industry has seen the value of its mortgage servicing rights drop from $70 billion to less than $40 billion as of the third quarter of 2012. Even banks that have not been active sellers, such as Wells Fargo & Co. and JPMorgan Chase & Co., have seen the fair value of their servicing portfolios decline as they are marked to market. 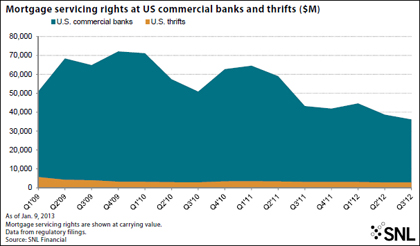 And major transactions have taken place since the end of the third quarter. Before the most recent Bank of America sale, Walter teamed up with Ocwen Financial Corp. on a successful $3 billion bid for the mortgage servicing assets of Residential Capital LLC.

Ron D'Vari, CEO and co-founder of NewOak Capital, told SNL that higher capital requirements for MSRs under the Basel III capital regime could cause the assets to become a drag on returns on equity at the major banks. He also thinks potential sellers may try to broker deals in the first quarter before their annual stress tests from the Federal Reserve. 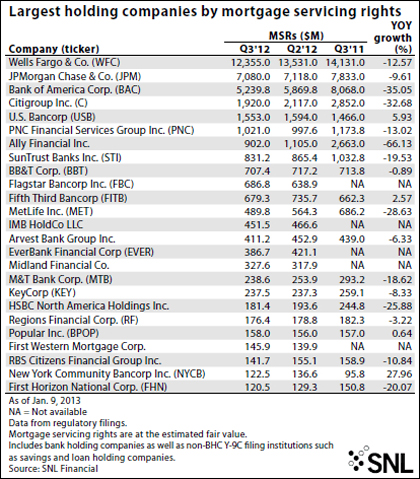 "There's definitely a bias towards selling," D'Vari said of the major banks.

Bank of America is still expected to be the major seller as it deals with legacy assets from its Countrywide acquisition, but JPMorgan and Citigroup Inc. could look to divest some assets as well, according to FBR Capital Markets analyst Paul Miller.

On the other hand, Wells Fargo, the largest mortgage originator in the U.S., is seen as likely to hold onto its servicing rights, as are regional and community banks. Miller told SNL he expects that the next big chunk of servicing to move to specialty servicers will be a predominantly Freddie Mac-backed portfolio.

Sales may move beyond damaged goods

In general, the new assets coming down the pipeline are expected to increasingly be of a different sort than the credit-challenged, high-touch mortgages that initially prompted the shift of servicing from banks to the specialty servicers.

Specialty servicers will eventually need to adjust to servicing the better-quality prime assets that have almost exclusively constituted post-crisis origination, according to James Lockhart, vice-chairman at Invesco Ltd.'s WL Ross & Co. LLC and a former director of the Federal Housing Finance Agency.

"If you want to replace a runoff book, you really have to do it on the prime side," Lockhart told SNL.

Walter took a step in that direction, announcing a deal to buy the servicing platform of MetLife Inc.'s MetLife Bank NA concurrently with the Bank of America portfolio.

WL Ross' Lockhart also remarked that Quicken Loans Inc. is working to build out its own prime servicing platform. The online mortgage lender announced Jan. 9 that its servicing portfolio had reached about $80 billion as of the end of 2012.

Nationstar has seen the most dramatic ramp-up in MSRs among the publicly traded special servicers. The value of the Fortress Investment Group LLC-backed company's servicing rights grew to $600.7 million at the end of the third quarter of 2012 from $246.9 million the year before.

And those figures do not include two pending Bank of America portfolios--the most recently announced deal and a smaller transaction announced in November 2012.

However, as the stock of credit-sensitive assets diminishes, the future for specialty servicers may look much like that of a traditional mortgage bank. Miller said the nondepository servicers are already moving in that direction. He pointed to Nationstar's origination business and Walter's acquisition of the ResCap platform as examples of efforts to move their earnings models to more of a mature, less-volatile model.

For Nationstar, Compass Point analyst Kevin Barker sees the origination potential of refinancing loans in the new portfolio as the most impactful earnings driver. In a Jan. 8 note, he estimated that the company will originate about $16 billion of loans in 2013, based on a recapture rate of between 30% and 35% for its portfolio.

Income from origination is also expected to be the main benefit for Walter from the Bank of America purchase, according to a Jan. 13 report by Keefe Bruyette & Woods analyst Bose George.

All of a piece with renewed credit conservatism

The increased importance of origination fits with the larger theme of improving practices in the housing market since the financial crisis. Miller said that while the nondepository servicers' high-touch capabilities gave them the edge in responding to the morass of bad loans from the housing crisis, they will need to adapt as the environment evolves.

"They've got to become more of a traditional mortgage bank," the FBR analyst said. "Right now bad loans are not being made. ... In five years or six years, when you work through all this mess, will there be any need for specialty servicers?"

[This article was posted on January 31, 2013, on the website of Banking Exchange, www.bankingexchange.com, and is copyright 2013 by the American Bankers Association.]