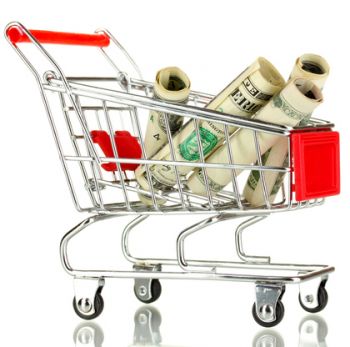 Walmart hosts both the most in-store branches and the highest total deposits from store branches. But the honor of the fastest-growing group belongs to another organization in the latest SNL Financial in-store branching analysis.

In-store branches have declined in recent years as banks and thrifts look for ways to maximize efficiency. With slack loan growth, squeezed margins, and greater regulatory costs, many banking institutions must cut back on overhead expenses to grow, or even maintain, profits. One way to trim those costs is to shut down underperforming branches. An easy target in that process has been in-store branches, which often hold a low amount of deposits and generate limited loan production and fee income.

What's behind the "checkout"

"Some banks have done very well with them," says Kerstein, "but overall there have been mixed results. With branch transactions in general declining, there have been a number of banks that have questioned the value [of in-store branches] in terms of their total distribution mix, especially for banks that are starting to rethink how many branches they need and what are the functions that are going to occur in those branches."

Kerstein explained that in-store branching "requires a different management process" compared to traditional branches. "If you think about that model, they are less expensive, and they are embedded in hopefully high-traffic locations. But they also have certain built-in deficits. They have very small spaces and they tend to be transaction points. They don't have very much room so being able to offer more consultative services or opening accounts is just more difficult to manage in that environment."

Despite fewer in-store branches, deposits have been flowing into the banking industry. Whether the success springs from operational savvy or simply being in the right place at the right time, total in-store deposits for U.S. banks and thrifts were $73.81 billion at June 30, 2012, representing a 3.15% year-over-year increase. Measured on a same-store basis, deposits jumped 7.59%.

Minneapolis-based U.S. Bancorp operated 766 in-store branches as of March 4, the most of any banking institution. But the average branch size for the bank was just $9.4 million in deposits at June 30, 2012--well below the industry average of $12.6 million. That gap could decrease in the future as U.S. Bancorp lops off some of its weakest branches and the newer ones gain greater traction.

Kerstein singled out U.S. Bancorp as a consistent top performer with in-store branches and noted that the average size of the branches is not indicative of its success. He said the bank runs the in-store unit "as a separate channel and puts dedicated management behind that, as opposed to integrating it into the rest of their network." 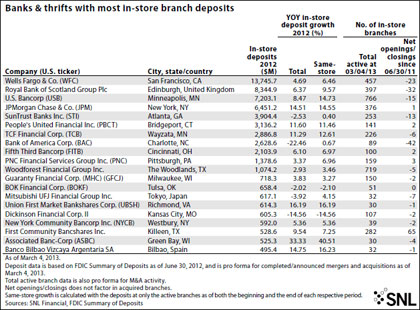 Chuck Stroup runs the in-store division at U.S. Bancorp. He echoed Kerstein's comments on the average branch size, noting that "there are lots of things you could do on deposits to bring in more or bring in less. Sometimes that's what people will play on. They will set a really aggressive rate out there and bring in lots of deposits. And that's just never been our strategy. We try to go after the whole relationship with the customer."

In addition to gathering deposits, Stroup said the in-store locations generate a robust amount of loan production. He said that while the branch deposit information is "readily available through the FDIC, what you can't get through the FDIC are things like loans and fee income. We look at all those when we measure branch performance. And we do quite well in loans."

Stroup continues, "I'm guessing if you could find comparative data on loans, you would see we are heads above the pack. This is one of the reasons that we continue to invest in the business. It's a great source of new customers and it's also a great source of loans for us. In our total in-store/on-site branch business right now, we have just under $8 billion in deposits and almost $5 billion in loans."

From July 1, 2011, through March 4, U.S. Bancorp experienced a net loss of 15 in-store branches, consisting of 66 closures (the most of any banking company) and 51 openings (the third-most in the industry). The bank has "given a lot of thought as to which locations make sense, and how to use them and how to manage them differently," says Kerstein.

Fifty-two of the 66 closed branches held less than $10 million in deposits as of June 30, 2011. The majority of the closed branches were in Giant Eagle stores in Ohio, as the supermarket switched to a relationship with Columbus, Ohio-based Huntington Bancshares Inc.

"That's what drove the unusual closure activity for us," remarked Stroup. "It wasn't any strategic change at the company." He said U.S. Bancorp has been closing "10 to 15 branches every year just based on performance and different opportunities."

As for the new branches, 16 are in Walmart and the other 35 are based in more than a dozen different stores. Stroup said the bank has "pretty steadily opened in the neighborhood of 25 to 35, some years in the range of 50 branches each year. And that's our strategy going forward. This year, we'll open right around 30."

Stroup explained that U.S. Bancorp has a plethora of options for new branches, "Now, we probably look at 200 to 300 opportunities every year from our different partners. That gives us a nice advantage because we can fill in gaps in our market. In Southern California, we've done a lot of filling in the last few years. Going forward, a lot of the growth will continue to be in Southern California just because our market share there is small but growing. But we'll still do a lot of stores in Ohio and the Pacific Northwest where we have opportunities."

There is a strategic advantage to in-store branches, according to Stroup.

"As the population moves in a certain metropolitan area, this is a great way for us to go in and quickly and inexpensively take advantage of the growth," he says, "like in Seattle, for example."

Wells Fargo, the King of Aisle 5

San Francisco-based Wells Fargo & Co. reigned as the in-store branching king in terms of deposits, far outdistancing peers with $13.75 billion as of June 2012. On a total in-store deposit basis, that represented a 4.69% increase from June 30, 2011. The year-over-year same-store growth was 6.46%. Wells Fargo's average in-store deposit size was $29.4 million at June 30, 2012, which was the highest level out of the top 20 in-store banks and well more than double the industry average.

Wells Fargo company spokeswoman Richele Messick said the bank has "a strong tradition of in-store banking going back to the 1990s." She remarked, "Customers want convenience and we know that many choose their bank based on its location. Much like other retailers, we try to place our stores and ATMs where we know our customers live, work and shop. We believe that in-stores, traditional stores, and off-site ATMs all work together to create a great and powerful distribution." 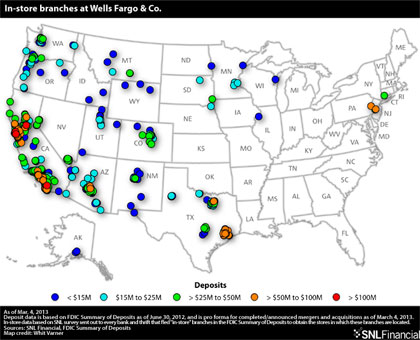 Of the top 20 in-store banking companies, Green Bay, Wis.-based Associated Banc-Corp experienced the highest year-over-year in-store total deposit growth at 33.33%. And the bank accomplished the growth with a net loss of two branches from July 1, 2011, to June 30, 2012 (five closed and three opened). Since last June, Associated has closed another three branches, while opening just one.

From July 1, 2011, to March 4, 538 in-store branches closed at U.S. banks and thrifts. Beside U.S. Bancorp, Laredo, Texas-based International Bancshares Corp. was the most active in shuttering branches. The bank announced a closure plan in September 2011 in response to regulations limiting debit interchange fees. Every one of the 58 closed in-store branches held less than $10 million in deposits at June 30, 2011. And all but five of the branches were in an H.E. Butt Grocery Co. store.

Also notable was Charlotte, N.C.-based Bank of America Corp. pulling out of 42 stores, with 17 coming from Albertsons Inc. The bank's total in-store deposits decreased 22.46% compared to June 30, 2011. But on a same-store basis, deposits actually went up 0.67%.

In addition, during that 20-month period, 261 in-store banking branches were opened. Huntington was the most active company, opening 72 branches (51 in Giant Eagle and 21 in Meijer Inc.) In September 2010, the bank announced that it would be undertaking a major in-store branching campaign in Ohio. The initiative spread to Michigan in May 2012, as the bank inked an agreement with another grocery chain. As of March 4, Huntington owned a total of 98 in-store branches. Aggregate deposits at June 30, 2012 were $196.5 million.

Another aggressive branch opener was Killeen, Texas-based First Community Bancshares Inc. It opened 69 branches from July 1, 2011, to March 4, including 31 in Walmarts and 29 in H.E. Butt. More than 93% of the bank's total branches were inside stores at the beginning of March. First Community has figured out how to make this unique model work. It offsets a relatively high efficiency ratio (92.41% in 2012) with an extraordinary amount of noninterest income (86.20% of operating revenue in 2012).

The bank expanded its franchise through an acquisition. In February 2012, it announced a purchase of 56 New York-based branches, 52 of which are in Stop & Shop Supermarket Co. stores, from Providence, R.I.-based RBS Citizens Financial Group Inc. 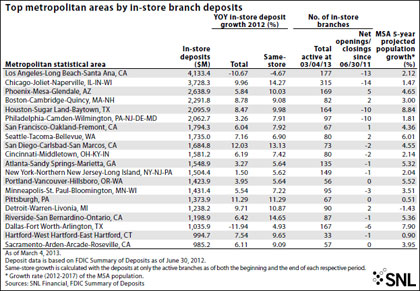 Where American shops to go banking

In contrast to the Los Angeles market, in-store deposits increased in the Chicago MSA. Its deposits of $3.73 billion were up 9.96% from June 30, 2011; same-store growth was 14.27%. The market leaders were Wayzata, Minn.-based TCF Financial Corp., with $1.72 billion, and New York-based JPMorgan Chase & Co., with $1.32 billion. All but one of TCF Financial's 156 in-store centers in Chicago as of March 4 was in a Jewel-Osco store. And JPMorgan had 53 of its 54 branches inside Dominick's Finer Foods. 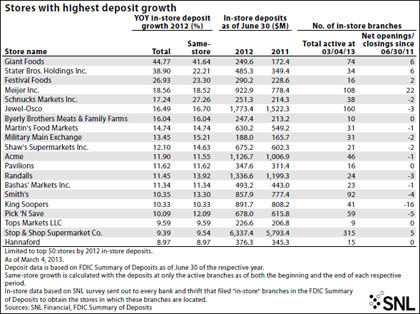 Which stores stock banks the most?

Of the top 50 in-store companies by total deposits, the fastest-growing for the year ended June 30, 2012, was Giant Foods. Its deposit base expanded to $249.6 million from $172.4 million. Pittsburgh-based PNC Financial Services Group Inc. operated 73 of the 74 stores in Giant Foods as of March 4. The other, run by Souderton, Pa.-based Univest Corp. of Pennsylvania, was the only one with more than $10 million in deposits as of last June.

Each year, SNL sends a survey to every bank and thrift that filed "in-store" branches with the FDIC Summary of Deposits to obtain the stores in which these branches are located. Survey results were compiled in January 2013. The data used for this article is based on the survey results.