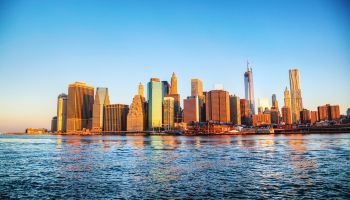 It may not be improving at a pace or with the strength that some would like to see, but indicators—including increases in home prices and private sector jobs—show that the economy of the New York City MSA continues to progress.

And it might be doing even better were it not for a bitter winter that the region is crawling out from under, Toms River, N.J.-based OceanFirst Financial Corp. President and COO Christopher Maher told SNL. He said the bank has seen the weather's effects in both residential mortgages and in its debit card business.

Debit card volumes were down in January and February but seem to have normalized in March, Maher said. "In particular, in the last couple of months, I think, the weather has played a substantial role," he said.

Manhattan and some other pockets of the New York-Newark-Jersey City MSA have seen increased economic activity, but it is often spotty depending on the business line.

For example, Maher said the real estate market in particular has been varied depending on the particular market. It has been strongest in Manhattan but hit-and-miss in the counties radiating out from there. Multifamily construction is the one "very hot" market across the metropolitan statistical area with a number of in-market banks and some that are more tangential now putting more of an effort into capturing that business, Maher said. 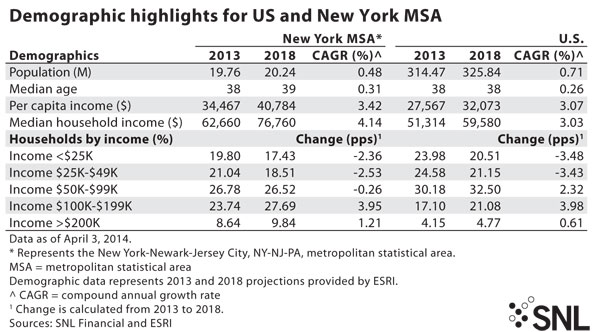 Anirban Basu, founder, chairman, and CEO of Sage Policy Group Inc., an economic and policy consulting firm in Baltimore, told SNL that New York's economy continues to progress. He said that is little surprise as Wall Street is roaring and the market for global tourism is now experiencing substantial recovery. The city's economy has been particularly strong, with more than 4 million people on payrolls, an all-time high, he said. "Along with finance and tourism, technology has been a major driver as has health care," he said. "Construction throughout the region is bouncing back, including significant amounts of nonresidential construction put in place recently."

Wall Street employees saw a 15% increase in their bonuses for 2013 compared to a year ago, according to an estimate released by New York State Comptroller Thomas DiNapoli on March 12. 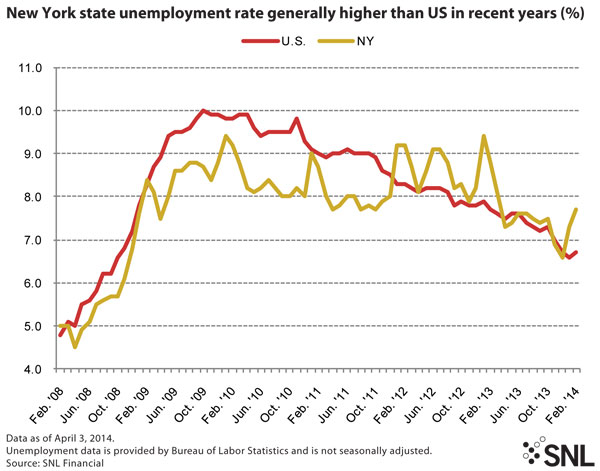 Branches in the MSA seem to be undergoing some repositioning, OceanFirst's Maher said. In some cases, that means closure and consolidation and in some, it means new, smaller facilities are opening.

Maher singled out JPMorgan Chase & Co. as one bank that is opening more than it is closing at a reasonable pace. "But most of the market, I would say, is doing a little bit more rationalization," he said. 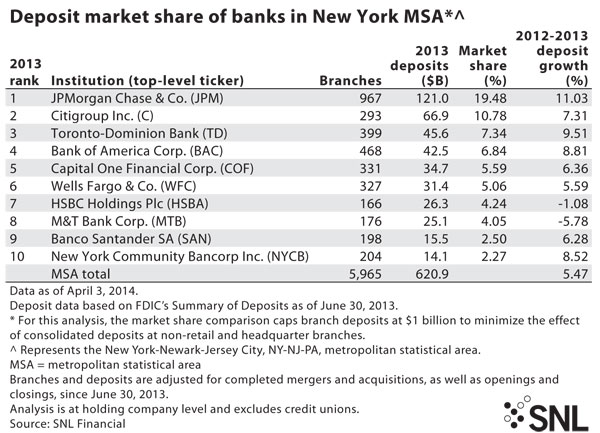 In terms of M&A, Maher said the market has seen a number of pending or completed capital transactions, so there is a "significant degree" of new capital entering the region. "So, with that new capital, you would expect, would come pressure for growth," he said. Also, there are a number of banks with high loan-to-deposit ratios. Many banks believe that in the long term one way to remedy that situation is to purchase a bank with a loan book not quite as full as its own. 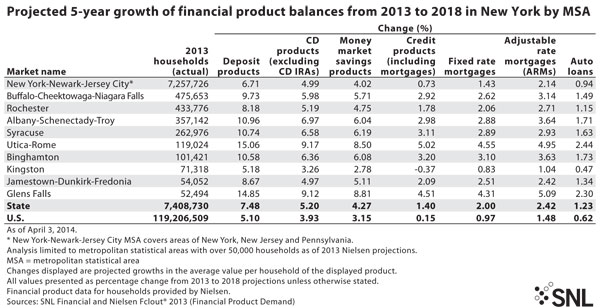 The S&P/Case-Shiller Home Price Indices showed that New York was one of a handful of cities that showed positive monthly returns in January. Prices increased 0.1% from the previous month. New York City also posted its highest year-over-year returns since 2006. Prices in the New York City metro area in January 2014 were up 6.7% from a year earlier.

Maher said that OceanFirst has always believed that core deposits are "tremendously" important to the franchise. OceanFirst is 88% core deposit-funded now but is always looking to expand its aggregate deposit base, he said. New commercial & industrial relationships are helping expand core deposits, which the bank believes will be critically important in a rising rate scenario. "We'll never have enough core deposits because we think that creates tremendous franchise value," he said.

Maher said pricing pressure in the MSA has leveled off, but in the last 12 months it has seen a loosening of credit standards. "That's of significant concern. It's one thing to compete on price, but to complete on credit criteria is something you never want to do," he said. Maher said he is seeing deals that should have strong covenants have light covenants and those that should have light covenants get none.

"It's actually surprising how quickly credit structuring has fallen back to what you would have seen a few years ago," Maher said.