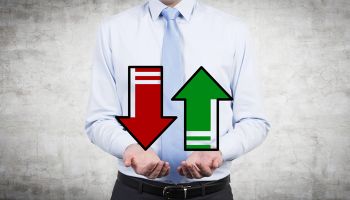 As first quarter 2015 earnings season approaches, expectations are modest, with analysts anticipating that a majority of the 20 largest public banking companies will report lower earnings than they did the previous quarter.

The temperate view comes as certain bottom-line benefits of solidifying credit quality level off while the pressure on interest income persists amid a protracted low-rate environment.

Federal Reserve policymakers have kept short-term interest rates historically low for years, dating to the 2008 financial crisis. While many banks are growing loans, they are not able to do so fast enough to both maintain credit quality and offset the impacts of rock-bottom rates, analysts say.

Looking at the banking universe broadly, a team of Sandler analysts previewed the upcoming earnings season—which gets underway April 14, with both JPMorgan Chase & Co. and Wells Fargo & Co. slated to report—and concluded that loans, on a median annualized basis, will grow 8.7% from the final quarter of 2014, bolstered by commercial-and-industrial activity. But they predicted net interest income will decline 0.4% and net interest margins will contract by 3 basis points. They cited loan yield erosion caused in part by low rates.

Core earnings per share for the banking sector, the analysts concluded, will decline from the previous quarter.

"I think [results] will be generally fine—but that is not to say great," Sandler O'Neill & Partners analyst Scott Siefers, discussing big banks in particular, told SNL. "Everybody is waiting on rates." 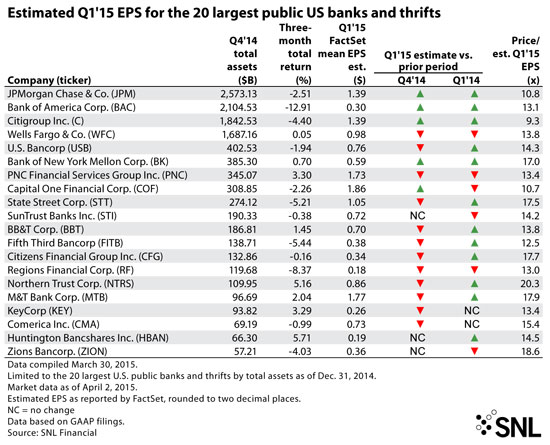 Of the 20 big banks examined by SNL, a majority are projected to post weaker first-quarter revenue levels when compared with the previous quarter. At the same time, three-fourths of them are expected to show higher loan-loss provisions.

While credit quality is generally strong, analysts say, banks increasingly are boosting provisions to keep pace with increased lending. As such, benefits to earnings such as credit-loss reserve releases are drying up, making the interest income that banks earn on loans all the more important, analysts say.

"Loan loss reserve releases are nearing an end and are not likely to provide much of an offset to stagnant revenue growth," analysts at Keefe Bruyette & Woods said in a report previewing big-bank earnings. The analysts are "concerned that the loan loss provision cycle is turning before the interest rate cycle, which could have a negative impact on consensus EPS estimates over the remainder of the year."

Siefers added that, as 2015 wears on, credit quality could come under pressure at banks heavily exposed to the energy sector. A plunge in oil prices since last summer has yet to show big problems for banks, but if prices remain low substantially longer, banks' oil-sector customers could start to struggle to make loan payments. 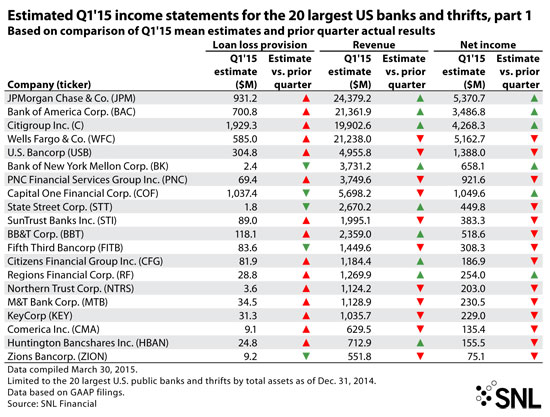 Expenses could also prove an area of concern for many banks. The SNL analysis shows that first-quarter expenses are expected to increase from the previous quarter at nine of the 20 major banks.

As the Sandler analysts note, seasonal factors such as "annual merit increases, vacation accruals, and snow removal expenses tend to put upward pressure on non-interest expenses" in the first quarter "and this year is no exception."

While banks have made big strides in recent years curbing costs and containing their expense bases—trimming branch networks and staffing levels, among other steps—regulatory and legal costs remain elevated for big banks, and lenders of all sizes have needed to make significant investments in new technology to keep up with customers' increasing preferences to do routine banking online or via mobile devices.

"So expenses are something to watch," Siefers said.

Analysts anticipate that noninterest income, meanwhile, will decline at half of the 20 banks amid seasonally lower deposit service fees. While many banks likely got a boost in mortgage-related fee income early in the first quarter, when long-term rates dipped and induced mortgage refinance activity, Siefers said that was likely "short-lived and finite." 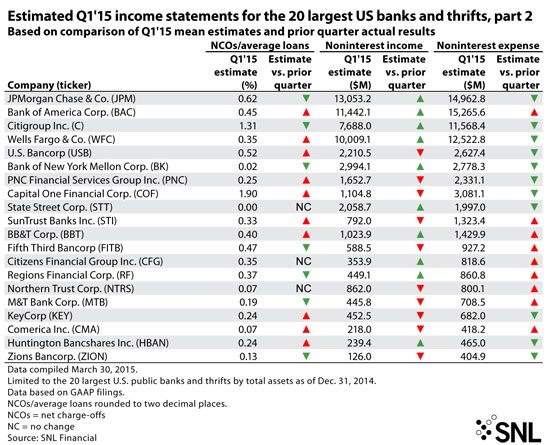 All of which leaves banks looking for an increase in short-term interest rates as the next catalyst for earnings growth, Siefers said. Problem is, nobody knows precisely when a rate hike will come and, when it happens, how significant it will be, he added.

Based on recent statements from Fed Chairman Janet Yellen and other policymakers, many observers are looking for a 25 basis-point increase in June or September. But many also are anticipating that, even if policymakers move on rates this year, they may move only once and then wait several meetings, perhaps into 2016, before further lifting rates, resulting in very little real effect for the banks.

"If they take that softer stance, that's a real concern," Siefers said, because it would leave many banks continuing to grapple with margin pressure.

Kevin Jacques, an economist and the finance chair at Baldwin Wallace University, said in a recent interview that big U.S. banks have clearly strengthened their capital and risk-management positions in recent years. But as a group, they remain vulnerable to the uncertainty of when and how fast rates will rise.

"If there is a surprise on the timing, and on how much rates are raised — more or less than expected — what are the implications on liquidity? On profits and losses?"