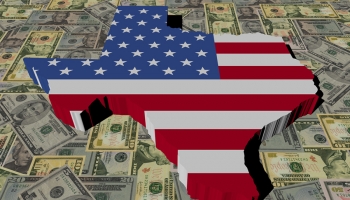 Texas-based Independent Bank Group entered the top 50 biggest US banks by assets in the fourth quarter of 2019 after its merger with Texas Capital Bank, according to data compiled by S&P Global Market Intelligence.

The deal, which is expected to close by August this year, increased Independent Bank’s total assets to $47.5 billion, making it the 48th biggest bank in America, according to S&P’s quarterly ranking.

The ranking reflected several major mergers and acquisitions in recent months, including CIT Group’s acquisition of Mutual of Omaha Bank, which completed on January 1. CIT rose one spot to 42 as a result, S&P reported.

Morgan Stanley’s $13 billion acquisition of E*TRADE, announced in February, closed the gap in assets to Goldman Sachs in fifth. Morgan Stanley had $957 billion in assets, compared with Goldman’s $993 billion.

Meanwhile, at the top of the rankings, S&P’s report showed that three of the US’s four biggest banks experienced a drop in assets in the fourth quarter of 2019.

JP Morgan Chase, Citigroup and Wells Fargo – first, third and fourth biggest in the US by assets – all saw their assets decrease, although they retained the positions in the ranking compared to Q3 2019.

JP Morgan Chase’s assets dropped by more than $77 billion, according to S&P, which was largely as a result of falling interest rates. It remained in first position with $2.7 trillion in assets.

The decline in assets meant the three banks fell in S&P’s global rankings, which were once again dominated by Chinese banks.

JP Morgan Chase dropped one place to seventh, overtaken by HSBC, while Citigroup fell two spots to 13th and Wells Fargo fell by one to 14th. Japanese banks Japan Post and Sumitomo Mitsui moved above them.

Bank of America remained eighth in the global ranking.

The biggest four banks in the world are all based in China, and have assets totalling more than $14.5 trillion between them.