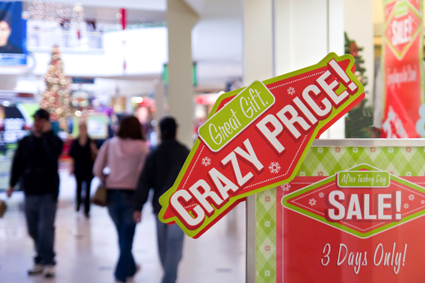 The bellwether Black Friday-Thanksgiving Weekend spending cycle--now including Thanksgiving itself, Black Friday, and Small Business Saturday--holds some promise for a bounceback in consumer spending in 2011.

So says a special edition of the SpendTrend point-of-sale report that First Data Corp. put together after the annual holiday spending kickoff passed. A pre-weekend report on October spending trends, reported previously on this website, had indicated strong possibilities of a hefty holiday weekend.
“The holiday season is off to a good solid start,” reported Silvio Tavares, senior vice-president and division manager of First Data Global Information and Analytics Solutions. “We continued to see strong momentum, through Cyber Monday.”

A combination of even earlier store openings--some places opened for sales on Thanksgiving proper--and slashed prices and special offers drove increased spending. In addition to the increase at the retail level, nonretail spending was also up over this weekend.
Delving into the Black Friday numbers
SpendTrend tracks same-store consumer spending via credit, signature debit, PIN debit, and electronic benefit transfer cards at U.S. merchant locations in First Data’s payments networks. As such, the study provides nearly real-time data about actual transactions, not estimates or projections of consumer spending. The study compares year-over-year growth rates in spending in both transaction volume and dollar volume. The study also tracks the trend in the “ticket”—the size of purchasers’ actual orders.

Among the merchant categories that saw an increase in dollar volume were electronics and appliances (12%); clothing and accessories (7.8%); sporting goods/hobby/book and music stores (6.8%); and non-store retailers (6.2%).
Big savings yield lower tickets
The actual transactions conducted reflect the reasons that drove the macro-level increases--big savings.

Thus, hacked prices and promotional offers resulted in a minus 0.9% year-over-year change in average ticket growth.

One exception was seen in the clothing and clothing accessory retailers’ segment. First Data noted that the prices of those goods have been rising significantly, and the increases have been passed along to consumers. As a result, average ticket growth increased by 5.4%.
Growth seen in most regions
Most regions saw dollar volume growth in double-digits over the Thanksgiving period. Regional growth rates, year-over-year, ran as follows: Midwest, 11.2%; Mid-Atlantic, 10.7%; Southwest, 10.2%; West, 10%; New England, 8.5%; and South, 8.1%.
Non-retail spending also increases
Overall dollar volume was up 9.7% in the nonretail category that First Data tracks as well.

Apparently, besides buying goods, Americans also made merry while giving thanks. The Food Service and Drinking Places category, which includes restaurants, showed Black Friday dollar volume growth year-over-year of 11.7%, versus 9.6%. And while last year the Leisure category saw shrinkage, with a growth rate change of minus 1.5% in 2010, it bounced way up this year, seeing a year-over-year increase of 12.5% in dollar volume.

And holiday travel bookings saw a year-over-year growth increase of 14.9%.
To learn more about SpendTrend, click here.
To listen to a podcast about the Black Friday report, click here.