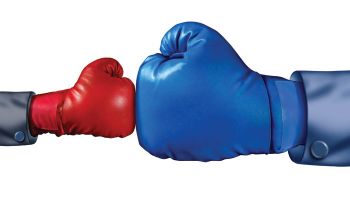 A banker challenging a financial regulator is like David battling Goliath; except that the behemoth regulator usually prevails.

It is a refreshing twist to see a banker topple both the Office of the Comptroller of the Currency (OCC) and the Board of Governors of the Federal Reserve System in Louis A. DeNaples v. OCC. DeNaples challenged the regulators’ enforcement of Section 19 of the Federal Deposit Insurance Act, and persuaded the D.C. Circuit Court of Appeals to vacate a lifetime ban from banking imposed by the OCC and the Board.

Section 19 restricts who may participate in the affairs of banks, savings and loans, and holding companies. The statute, which is enforced by several financial regulators, including the Federal Deposit Insurance Corp. and the OCC, bars bankers who have entered “a pretrial diversion or similar program” in connection with certain crimes. The statute does not define what qualifies as a pretrial diversion or similar program, but DeNaples and the prosecutor tried to structure a pretrial agreement that did not trigger the Section 19 prohibition.

DeNaples was the former chairman of First National Community Bank and previously owned a casino in Pennsylvania. In 2008, Pennsylvania charged DeNaples with perjury, alleging that he lied to the Pennsylvania Gaming Control Board about his relationships with suspected members of the Italian mafia. In response, the OCC issued a cease-and-desist order barring DeNaples from banking until the charges were resolved.

DeNaples entered into an “agreement” with the district attorney to have all charges dismissed and his record expunged if DeNaples satisfied certain prerequisites, such as divesting his interest in the casino. The district attorney’s office advised the OCC that the agreement did not constitute a pretrial diversion under Pennsylvania law, but the OCC disagreed and issued an order permanently banning DeNaples from banking. After DeNaples was unable to persuade an administrative law judge or the Federal Reserve Board that the order was improper, he appealed to the D.C. Circuit. On Jan. 29, 2012, the court of appeals vacated the order and criticized the regulators’ “bizarre” and “inconsistent” enforcement of Section 19. The Court commented that the FDIC requires all expunged pretrial agreements be exempt from Section 19, but the OCC does not permit such an exemption. Likewise, the court noted that the Fed does not follow the FDIC’s Section 19 policy with respect to holding companies, but mimics the FDIC approach with savings and loans, even though Section 19 gives no reason for treating the institutions differently. The court said understanding the agencies conflicting rationales was akin to “draw[ing] a two-dimensional shape on the surface of a grapefruit.”

It is unclear whether DeNaples achieved a full knock-out or if the regulators will rise and eventually prevail. The court remanded the case, ordering the administrative law judge to consider the Pennsylvania state law definition of pretrial diversion. The court also stayed the order pending a probable en banc rehearing request from the government. While it may be temporary, it’s nice to see David win one.