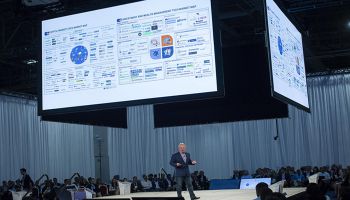 Fintech expert Chris Skinner gave his advice in a format new to Money 20/20 this year: The Forum. Staged like theater-in-the-round, Forum presentations were broadcast to audience members via wireless headsets.

Bill Gates famously said in a 1994 speech at a Bank Administration Institute conference that “Banks are dinosaurs, they can be bypassed.”

Not exactly the smartest thing to say from a marketing perspective, but Microsoft was king of the hill at the time.

Twenty-three years later (not even a blip in Mesozoic time) some of the financial reptiles are bigger and stronger than ever. There are fewer of them in the land, however, and, indeed, they have been bypassed in some ways and for some functions.

The “d word” surfaced again at this month’s Money 20/20 Conference, when author and blogger Chris Skinner quoted a fintech partner of a big Nordic bank referring to banks as dinosaurs. They certainly look like that when you have a boardroom of old, white men, Skinner added, with a large photo of such a board appearing above him on the stage.

“Banks have no diversity of leadership,” Skinner continued. “Ninety-four percent of bank boardrooms,” he explained, “have never had any professional experience with technology in their career.” In a follow-up email he noted that “two out of five banks are run by people with no technology background and a further two out of five only have one person who actually worked for a tech firm or bank IT department. How can banks become digital banks if they have no digital leadership or digitally experienced people?”

That observation played to Skinner’s overall theme that banking has entered a new era in which “evolution” must give way to “transformation.”

Skinner, who writes daily on fintech-related topics in his Finanser blog, said that many people view the changes occurring as a result of mobility and other aspects of digitalization as an evolutionary change.

“Banking as usual is a dangerous way to think,” said Skinner. “It could result in the end of the bank.”

He cited a Gartner study that found that 76% of bankers polled said that digitalization meant no change to the business of banking.

He gave the same response to the statistic that 80% of bankers felt they had done what they needed to do digitally by rolling out a mobile banking app.

“This is a fundamental shift,” he said.

In a video clip produced by Money 20/20, Skinner said people in the industry are making a mistake by thinking that technology is just about making banking “faster and lower-cost. It’s not. It’s actually about rethinking how we exchange value between each other globally through the mobile internet, and that’s transformational.”

The real economic power, Skinner observed, has shifted from industrial companies to digital companies. The latter don’t actually do the work, he said. They provide platforms. At the smaller end of the scale, he continued, a tech startup can quickly become a global player through an API (application programming interface). You can see this with Uber and Airbnb, he said.

Closer to home, Skinner cited Zopa, the original P2P lender. When it launched in the U.K. in 2005, said Skinner, everyone thought Zopa was nuts. Now it has 4% of the U.K. credit market.

Continuing, Skinner noted how Venmo began when one of its two 26-year-old founders forgot his wallet. Thinking the resulting hassles were stupid, he and his co-founder developed the payment app that works on a variety of APIs.

“The rise of fintech companies is not because it’s cool,” said Skinner, but because these companies “are doing the right thing for the internet age.” And it’s not just fintech. It’s insuretech, regtech, and other “techs” impacting wealth management, capital markets, and more.

Clean up that data

“Data is the new battleground,” said Skinner and will determine the winners and losers for the next decade. “Money is data, “he added.

Banks have huge amounts of data, but Skinner described it as “dirty.” He didn’t define the term in his presentation but part of its meaning is duplicative, incomplete, or nonintegrated data—things that often challenge banks using legacy systems for different applications.

Without clean data, said Skinner, businesses cannot be successful in harnessing the power of machine learning and artificial intelligence, at least not fully. The challenge for banks is significant because, according to statistics cited by Skinner, 43% of banks’ core systems are written in COBOL, , and 92% of banks are running their core systems on older IBM mainframes.

“They’re locked into the last century,” was his observation.

He did note there has been progress in some areas. “I do like that JPMorgan can analyze commercial contracts in seconds using AI compared to the 360,000 hours lawyers and bank officers would spend doing it.

“The lawyers will go,” said Skinner. But so will many employees. He said predictions are for one in three banking jobs to disappear in the next ten years—“some say it will be closer to half.”

The bank model of the future, said Skinner, is built around collaboration and partnership. Part of this involves adopting a curator role. Explaining this concept further in a post-event email exchange, Skinner wrote that “Curation is acting as an intermediary of apps and APIs to leverage customer data and service.

“In other words,” he continued, “rather than being disintermediated by technology, banks retain that space but now as an intermediary of data rather money.” He wrote on the subject in more depth in a blog earlier this year.

Not fintechs over banks

Skinner’s time slot was only 20 minutes so he didn’t take questions. He may well have gotten pushback on some of his points. Based on conversations with attendees and comments made at other sessions, bankers at the conference weren’t buying the notion of bank obsolescence or extinction. As one person observed, the large contingent of bankers at this year’s conference suggests more bankers understand the need to adapt quickly to the digital era and partner with fintechs. There was a great deal of networking going on.

For his part, Skinner is neither pro-bank nor pro-fintech. “I like to say it how I see it,” he said, and he says it to both sides. In a recent blog based on a conference panel, for example, he agreed with bankers who had questioned the sustainability of a group of fintech startups that were relying on a better user experience to differentiate themselves from banks in the card/payments space. The bankers pointed out that they could duplicate the UX.

Overall, said Skinner, “I think that both banks and technologists need more imagination with tech to really change the game.”