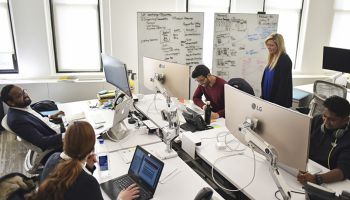 Bankers confronting a world of continual digital change, and a growing number of digitized competitors, may sometimes wonder how they can keep up. Where will the ideas come from that will keep banking in the running?

Actually, coming up with ideas, once you commit to innovation, isn’t the hard part, according to Roger Park, Financial Services Innovation Leader, EY Americas, in an interview conducted in the firm’s Union Square “wavespace” innovation lab. Union Square is one of Manhattan’s tech hotbeds.

Park, a veteran of financial technology, including a stint at JPMorgan Chase, manages innovation across EY's Financial Services Office. (He formerly managed the center.)

“You’ll get plenty of ideas,” says Park. However, for a bank to focus on the ideas with the best chance of success, he says, “you’ll have to kill about 95% of them.”

It’s not unlike the process of thinning that a gardener goes through as seedlings begin to come up.

Still not convinced that ideas can come easily once you start in that gear? EY Americas’ Steve Guddat grabs a marker and sketches out a theoretical financial process on a whiteboard in a Union Square conference room.

Find the pain points in the process for customers, he says, and you will have your ideas. Guddat is Financial Services User Experience and Visual Design Lead.

The center that Park manages is home to an array of advanced technology that both EY staffers and some clients can take advantage of for developing new ideas and approaches. Typically those using the center rotate in for a time and later rotate out, taking what they’ve learned with them. Project teams may come in as a group.

The center currently can hold about 100 people at a time and 60-70 of them are “rotators.” In fact, many of the computer stations at the long tables that constitute most of the lab facilities are first-come, first-served. Arrive late and you may not get the spot you wanted.

“I call those my ‘studios in a box’,” says Guddat. “We come in with a toolbox of design thinking to help them stand up their own organizations’ efforts.”

The center is one of a worldwide network that can tap into new technologies including artificial intelligence, robotics process automation, blockchain, data analytics, customer experience, and cybersecurity. All this is under the umbrella of the firm’s industry and regulatory expertise.

Park, who wrote “Unite 'suits' and 'jeans'” on this website, acknowledges that a common concern as banks innovate is regulatory compliance. He and Guddat say the best way to successfully produce innovation is to have the bank’s compliance, risk management, and legal teams represented in the development process from the very beginning.

Culture clash will be inevitable, they admit.

“The first meeting, they will sit there like this,” says Guddat, folding his arms in a form of body language that connotes resistance to what’s on the table.

A scratchy beginning, perhaps, but an essential step to building common understanding and cooperation, according to Park.

“You can’t have them becoming a hurdle to get past at the end of the process,” he explains.

As a result, Park and Guddat believe the sooner these functions can become part of the development process, the better the end result.

Won’t having people often seen as the “Department of No” constrain innovation? the pair is asked.

As an example, Guddat points to disclosures, a basic of the compliance process. It is helpful to have staff that understand the requirements on timing and details right there when an onboarding process is being designed.

“When is the right time for the disclosure to pop up?” says Guddat. Compliance knows the answer to that. Once the requirements are established, a designer can figure out how to ease that pain point.

“There are techniques you can play with,” says Guddat. “That’s where the magic happens.”

“Digital is no longer a question of whether you are going to do it,” says Park.

Because the change will be so fundamental in time, he says, “innovation thinking has to go to all levels of the organization. The amount of disruption that our clients are dealing with is overwhelming.”

Recruitment of the appropriate talent is something that many banks worry about. Park has a tip for them:

Disruption, he says, has been going along for long enough that some of the experts employed by fintech firms have grown tired of the hours and other pressures of their world.

“We’re starting to see refugees from the startup community,” says Park. These people have the skills banks are seeking, and may be looking for a bit more normality.