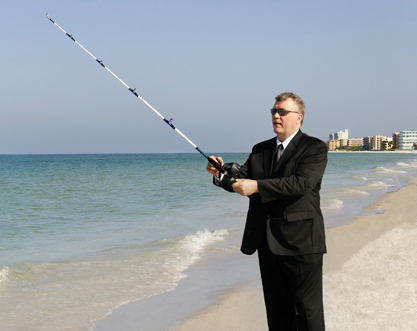 Maybe you won't catch the banking equivalent of an 800-pound tuna. But even a lower-rate loan beats the returns from typical bank investments.

"Many of us probably would be better fishermen if we did not spend so much time watching and waiting for the world to become perfect."

As someone who fishes for tuna off the New England coast, I understand the frustrations of pursuing a declining resource.

Years ago, tuna fishing paralleled the old days of  banking--the adage that banking was a 3/8/3 industry. Bring in the deposits at 3%, lend it at 8%, and get to the golf course for a 3 p.m. tee time!

One of the key issues facing community bankers is the perpetual downward momentum in projected earnings. It is not uncommon to see a bank expecting a 5% decline in projected net interest income over the next 12 months. 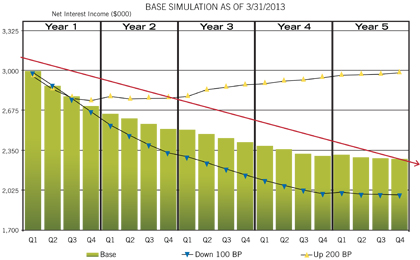 Many bankers are looking for ways to push earnings back towards 2012 levels. Typically, loans become the obvious choice, and they want to know how much additional loan growth their banks need to bridge the earnings gap. Although the answer to this question needs nothing more than "back of the napkin" math, the real issue resides in the execution of a strategy that has been as elusive, since 2008, as 800-pound tuna.

This article will focus on why loans remain the best option, and provide insights into some of the techniques used to generate a larger market share of loans.

What are the alternatives?

I know some of you read the introductory section and flinched at the bold notion that loans are the lone remedy for earnings in 2013. You doubt me? Then I challenge you to find a less dirty shirt in your closet that you'd rather wear.

Investments—On average, most community banks need somewhere in the neighborhood of a 2% return to cover their net overhead as a percentage of total assets. In many cases, the best risk/return investment vehicles barely yield 2%. Therefore, in simple terms, if a bank is purchasing investments, it is likely doing so at a rate that does not cover overhead. Furthermore, the allocation of capital in this environment requires careful considerations due to the strong possibility that these securities will potentially reduce capital ratios when interest rates finally increase (think BASEL III).

Deposits—One of the main reasons many bankers are forced to look to the investment markets is the continued influx of deposits onto their balance sheets. More specifically, many banks continue to see increases in non-maturity deposit balances, or at the very least, a continued migration from time deposits to more liquid MMDAs or savings accounts.

This trend has tapered down during 2013, as stock markets are reaching new highs daily. However, the simple fact is that many community banks have more cash on their balance sheets than they know to do with!

Unfortunately, many banks have already cut deposit pricing to the minimum. Over the past several years, the relief generated from the re-pricing of deposits has buoyed earnings and offset downward momentum to asset yields, but this game is quickly coming to an end. Therefore the benefit derived from retail deposit cost reductions has essentially become meaningless.

Wholesale funding—With the industry awash in liquidity, the absence of wholesale borrowings on balance sheets should come to no one's surprise. If you still have legacy borrowings that have yet to mature, there is a high probability that you plan to pay them down. If you are stuck with borrowings that were taken down over the past several years in anticipation of rising rates, understand that the option to restructure those advances exists. However, it may be nothing more than a simple shifting of earnings.

Overhead—For most banks, many options above the margin line do not move the earnings needle meaningfully. Therefore, it has become increasingly common to take a hard look at expenses. Free checking accounts are becoming a distant memory. Banks have pared back hours at branches or, in many cases, closed them. Many banks are looking to do more with less, which results in headcount reductions for those with the greatest earnings pressures. Personnel reductions will likely cause deterioration in the level of service a community bank can provide to depositors, and therefore any changes below the margin line are highly strategic and usually considered with caution by bank executives.

Given these alternatives for bolstering earnings, it becomes apparent that the answer is to produce more loans. Easier said than done, but the following highlights the characteristics of institutions that have successfully grown loans over the past several quarters.

• Cardinal rule: Get over the psychological hurdle of 4% loans!

The best credits in many markets can name their price on most deals. Given this reality, I'm always shocked when institutions tell me they won't originate anything under 5%, 4.75%, or 4.50%.

I'm always compelled to ask where those figures came from.

I'm especially curious when these same banks are purchasing investments with yields less than half of what the market ultimately bore on loan deals they lost to competitors.

Banks that have identified the best credits in their marketplace, and correspondingly offered the most competitive package (service, not just the lowest rate), have found themselves with premier credits at rates that are still higher than any of their alternatives.

• How quickly can you close a loan?

Another trend that has emerged from those who have grown their portfolios is the ability to close a loan in as little as one week, in some cases.

The ability to extend cash to potential borrowers in an expedited fashion shows how serious your bank can be about getting a deal done.

Make use of community banks' ability to make faster decisions. In some cases, even if the rate offered was well above what other competitors were offering, borrowers have taken deals that guaranteed that they could close the loan within a shorter period of time. (Prepayment penalties should be used by all who employ this strategy!). Access to the key decision makers at the bank can many times be the differentiating factor between a deal that is won versus a deal that is lost.

As a result, many banks are looking at their processes so that the lag time is materially diminished.

• How many different structures (rate/term) can you quote on a deal?

Often the ability to offer multiple terms can provide a strategic advantage over competitors who are fixated on a particular deal structure, just because the borrower thinks they want or need a five-year deal. The more options you provide the greater the chance you can bridge gaps on pricing and find what works best for both the institution and the borrower. This is akin to the person who walks into the car dealership looking for a sports car, but drives away in a truck.

• Can you offer back-to-back swaps?

Most customers are demanding longer-term, fixed-rate loans, while most banks are uncomfortable doing deals beyond their traditional terms (i.e. five years).

One way institutions are insulating themselves against interest rate risk and garnering marketshare is through employment of a back-to-back swap. This arrangement allows banks to offer a fixed-rate structure while booking a floating-rate loan on their balance sheet. Unfortunately, many banks question the sophistication of their borrowers and have yet to offer the product. But this mindset is shortsighted, as customers have become educated to the benefits of a deal with a swap.

However, this is not something that a bank can one day wake up and offer! If you are routinely losing deals to competitors due to the length of the loan, rest assured that they are likely utilizing a back to back swap.

• Do not be afraid of long-term mortgages ... but know your limitations!

The general consensus among bankers is that it is highly likely any fixed-rate loan kept in portfolio will come back to haunt them at some point. Most banks have sold their residential production into the secondary market and thereby boosted fee income.

However, with rates hovering around levels commensurate to 2012, the reality is that refinance activity is slowing and therefore many banks have reduced their expectation for fee income in 2013.

Some banks are purchasing equivalent-term mortgage-backed securities for half the yield, paying premiums and potentially having to account for losses against capital when rates increase (BASEL III again). It would be wise to calculate your bank's structural capacity to portfolio longer-term mortgages and the risk/return tradeoffs of selling vs. holding mortgage production.

For many, the mere implication that loans are the only way to defy the gravitational pull on earnings may be a difficult pill to swallow. But given current alternatives, it's truly hard to make a case against loans.

The best banks and fishermen share many of the same attributes.

The ones who are willing to rethink their strategy, outwork their competition, and try new tactics are typically the ones who achieve uncommon results.

So when the next deal sheet comes across your desk with a rate that is historically low, take a harder look and consider all of the alternatives before you allow that fish to swim away from you!

Vincent Clevenger is a senior consultant at Darling Consulting Group. In this position, he currently advises financial institutions on balance sheet management strategies. He takes a practical approach to the demands that the economic and regulatory environment place on his clients. Since joining the firm in 2003, he has worked in a number of capacities within DCG assisting clients in all aspects of ALM including process reviews, model validations, policy reviews, capital management and contingency liquidity planning. He also serves as the product manager for DCG’s capital planning and stress testing products.