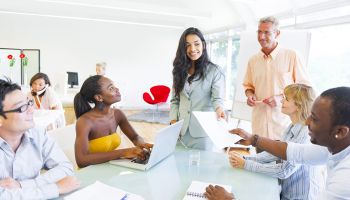 Lipser Bank, a community bank with ten branches, planned to expand its footprint into Esper Creek, an adjacent town. The town was underserved today and slated for significant population growth—a perfect expansion opportunity.

As the opening date grew closer, the bank’s project team met to discuss branch staffing. Like other banks, Lipser (all names have been disguised) intended to transfer experienced management to the new location, hire entry-level staff locally, and promote existing staff to backfill the current jobs for those being transferred.

Peek inside a planning session

Jerry, the bank’s marketing director, provided an overview of the demographics of Esper Creek: “Most of the town is typical middle class Main Street with a healthy mixture of cultures, ethnicities, and races. However, there are at least a third descended from the town’s settlers whose first language is Esperanto.”

“George, how many people in branch management here speak Esperanto?”

George squirmed uncomfortably. “Well, we’ve never gone out to recruit from that group.”

Cheryl shot back, “We have a strong culture of promoting from within. So, at this rate, it will take five years or more for any new hires to advance to branch management positions.”

It’s about our business

“Let’s be clear here. This is not about motherhood and apple pie.

“It’s about business. The best way to serve the market is to employ the market. Diversity encompasses so many groups today: gender, ethnic background, persons with disabilities, and sexual orientation, just to name a few. Diversity is about inclusion and respect. It’s impossible to employ people from every group in a single branch, but customers will recognize that we are being inclusive and appreciate that.”

Cheryl smiled and made a little joke about it being time to get off her soapbox. But her words resonated throughout the bank. People realized that the bank had become very insular. The planned expansion had cracked open the door to thinking about diversity as a strategic differentiator.

So, how do we get diverse succession?

The disadvantage of being an expert is that one is expected to have an answer for every problem.

So the next day, when Lipser Bank’s president e-mailed me to ask how he could build more diversity into the senior team and make it a consideration in succession planning . . . I was stumped.

One of the key risks is that if the promotion process is rushed, managers may be unprepared for their new roles—and then they will fail. To those skeptical about the value of diversity, the failure would “prove” the folly of the initiative.

So, to avoid this, the bank needed to tread carefully and do it right.

I had to tell Lipser’s President that there was no overnight fix. However, I added that the sooner the bank started, the sooner it would be where it wanted to be.