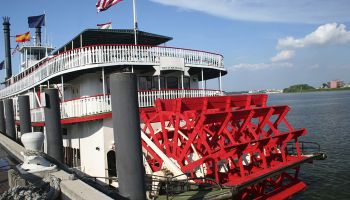 The revitalization of New Orleans in recent years has created a rare growth market for banks.

The rebuilding and redevelopment of New Orleans has finally taken hold after years of delays in the wake of Hurricane Katrina. The expansion activity has offered banks a growth engine at a time when most institutions across the U.S. say that loan growth has come from market share gains rather than underlying economic growth.

Bankers and business leaders in New Orleans say that Hurricane Katrina allowed the city to do something no other large American city ever has—"hit the reset button" and charter a new path. New Orleans is indeed heading in a new direction, switching from a city that was often considered dormant to one of the fastest-growing cities in the U.S. since the recession hit.

Guy Williams, chairman, president and CEO of New Orleans-based Gulf Coast Bank and Trust Co., said New Orleans has been rebuilt stronger in the wake of Katrina, with many people banding together to improve the infrastructure and school system and snuff out political corruption. Williams said that many young professionals are now deciding to move to New Orleans because they are attracted to the reasonable cost of living and the city's rich history, culture, food, and music.

"The economy is much better than it was. One of the most exciting things is that we have now become a destination of choice for people that can live anywhere," Williams told SNL. "We're seeing a big influx of people from out of town, and they're sort of the best and brightest. Good work ethic, good attitude and theywant to be here." 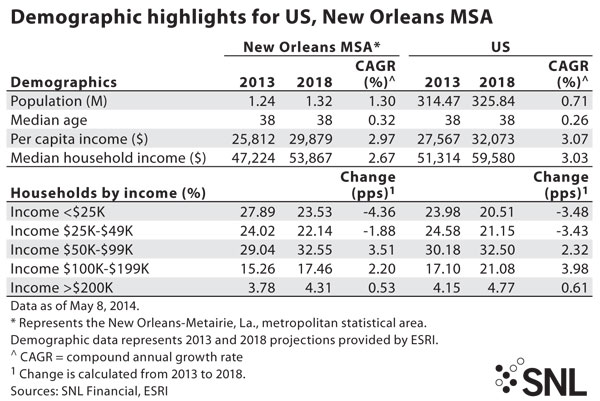 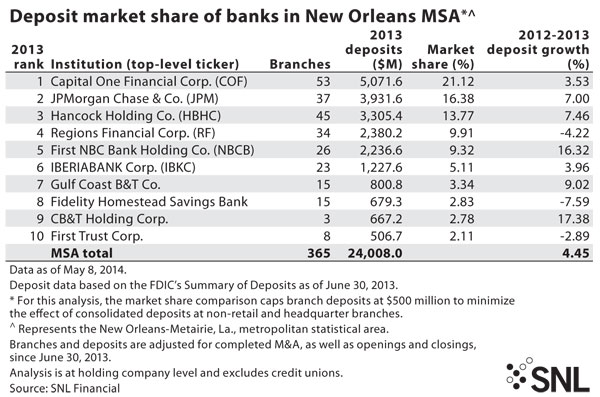 The stronger economy is evident in local banks' results. New Orleans-based banks boasted stronger loan growth in the first quarter than the rest of the banking industry, which saw its loan balances hold flat from the linked quarter.

The 10 banks and thrifts based in New Orleans, meanwhile, reported median loan growth of 1.50% from the linked. Loan growth from some banks in the Big Easy really stands out, with Gulf Coast Bank and Trust Co., Fidelity Homestead Savings Bank, Crescent Bank & Trust, and First NBC Bank Holding Co. all growing their loan portfolios in the first quarter by at least 3.5% sequentially.

Banks say that development in New Orleans has driven recent loan growth. Gulf Coast Bank grew its loan portfolio by more than 6% in the first quarter, and the bank's chief executive said that most of its business has come by helping people "expand, build or start" and not by taking away market share.

"We're the largest small-business lender in the state. We really focus hard on helping people start and expand their businesses," Williams said. "We're a very big construction lender and have helped renovate a lot of the historic areas, a lot of the recovering areas and that's brand new business, not takeaway."

Carl Chaney, co-CEO at Hancock Holding Co., noted at the recent Gulf South Bank Conference in New Orleans that market shares gains have driven loan growth in much of the company's footprint but said that most of the growth in South Louisiana has been "true organic growth as the economy is doing so well."

Bankers at IBERIABANK Corp., which holds the sixth-largest deposit market share in New Orleans, have touted strength in the company's Texas markets in years past, but recently have pointed to expansion activity in the Big Easy. They have said they see increased change in the face of downtown New Orleans due to redevelopment and the addition of two multibillion-dollar hospital complexes.

"New Orleans is going through a renaissance of its own," IBERIABANK COO Michael Brown noted at the Gulf South Bank Conference.

The New Orleans economy has recovered significantly from nearly 10 years ago, when rebuilding efforts in the wake of Hurricane Katrina fell well short of expectations. People hoped in the aftermath of the storm that the influx of federal and state aid would turn New Orleans from a low-growth market to a growth market for a decade, but the aid came much slower than many expected.

"If you talk to people in [Whitney Holding Corp.] or other companies down there, I think there's a general sense of frustration that this aid has not really made its way into people's hands or has just taken really long," Kevin Fitzsimmons, then an analyst at Sandler O'Neill, told SNL in the summer of 2007.

Bankers and economists in the market said that red tape slowed the rebuilding process. They said the complexity of Louisiana's Road Home program, which aimed to help citizens with funding to rebuild their homes, resulted in claimants not receiving their first checks until October 2006, more than a year after Katrina. Observers regularly argued that political infighting and possibly even corruption slowed the rebuilding process, as well. That speculation seemed to have some merit, when earlier this year a jury found that Ray Nagin, the mayor of New Orleans before and after Katrina, was guilty of taking bribes and other favors from businessman seeking contracts and favorable treatment from the city.

But now, nearly a decade after Katrina ravaged New Orleans, aid continues to flow into the area. Support from community and business leaders that came to the area after Katrina also began paying dividends in recent years, spurring new development projects that bankers say the city has not experienced since the early 1980s.

Business expansion activity has helped keep unemployment low in metro New Orleans and well below the national average through the credit crisis. The unemployment rate in New Orleans remains favorable and fell to just 4.3% in April from 4.5% in March and 5.8% a year earlier. 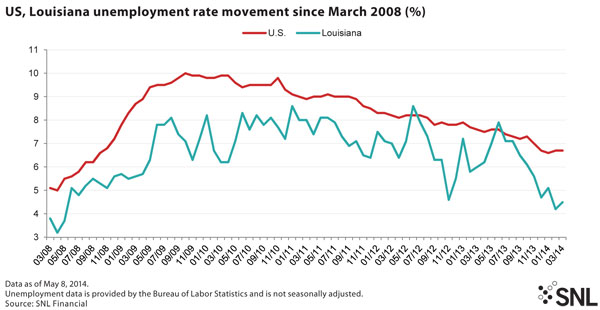 Business leaders believe that the city will be able to support and even possibly attract new jobs due to the city's attractive cultural activities, affordable housing and, importantly, revitalized school system. Ben Johnson, president and CEO of the New Orleans Chamber of Commerce, noted that New Orleans arguably had the worst school system in the U.S. before Katrina with nearly half of the schools in the district not in compliance with standards. That number has fallen to below 25%, he said, thanks in large part to a blossoming charter school movement that emerged in the aftermath of the storm.

"We became ground zero for anyone in the charter school movement," Johnson said. "If there's a [silver lining] in Katrina, it's creating a new public education system."

Gulf Coast's Williams noted that New Orleans charter schools offer residents a great education and wide variety of choice at zero cost. For instance, he said, students interested in foreign languages can attend the International School, where they will learn to speak Spanish, French, and Mandarin Chinese. Students that want to explore an art career can attend the New Orleans Center for the Creative Arts and those interested in the restaurant business can attend a culinary charter school, he said.

Johnson and others hope that new school system will create a workforce for New Orleans' future and one that can support development projects that are already in progress. For instance, construction is well underway for a new $1.2 billion University Medical Center, a 424-bed complex that will serve as a teaching facility for up to 2,000 medical students. Next to the University Medical Center is also a new Veterans Affairs Medical Center that will serve as a 200-bed complex. Both hospitals and new Cancer Research Centers are in BioDistrict New Orleans, a state-enabled economic development district created in 2005 to help grow the bioscience sector in the New Orleans economy. Over the next 20 years, the creators of the BioDistrict hope that it will create 34,000 direct and indirect jobs, 3,600 annual construction jobs, $3.3 billion in economic activity, and $1.4 billion in local tax generated.

New Orleans has also served as an incubator for technological development in recent years. In the past few years, Forbes named metro New Orleans the third-best area for IT jobs behind Silicon Valley and San Francisco and ranked the city No. 1 for attracting new college-educated residents under 25 years old.

The Idea Village, a nonprofit organization founded in 2000, has also supported technological development and helped spur entrepreneurship in New Orleans. The organization has provided direct support to more than 3,000 New Orleans entrepreneurs over the last 14 years and recently held the sixth annual New Orleans Entrepreneur Week, or NOEW, which featured 70 New Orleans-based startups in 16 capital competitions for venture, angel and seed funding.

The event and other developments are sowing the seeds for future growth in New Orleans. Growth is hard to come by in many other markets, but New Orleans, long considered a slow growth market, can actually offer banks in the area wind at their backs.

"We're in a cyclical upcycle that could last for decades," Williams said. 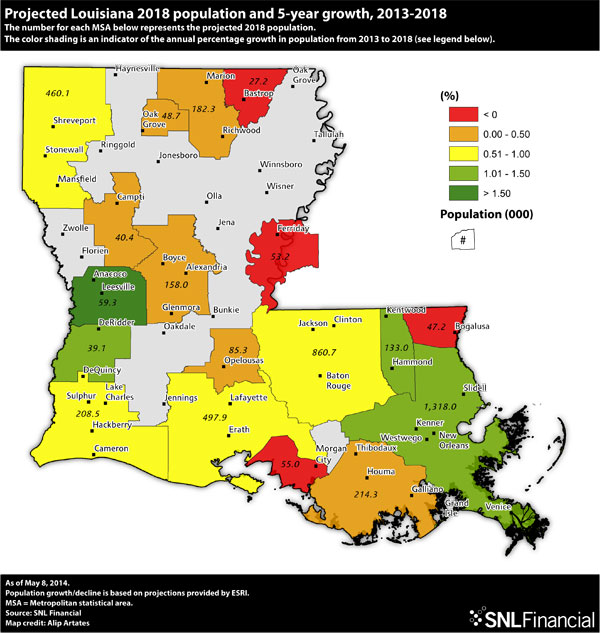 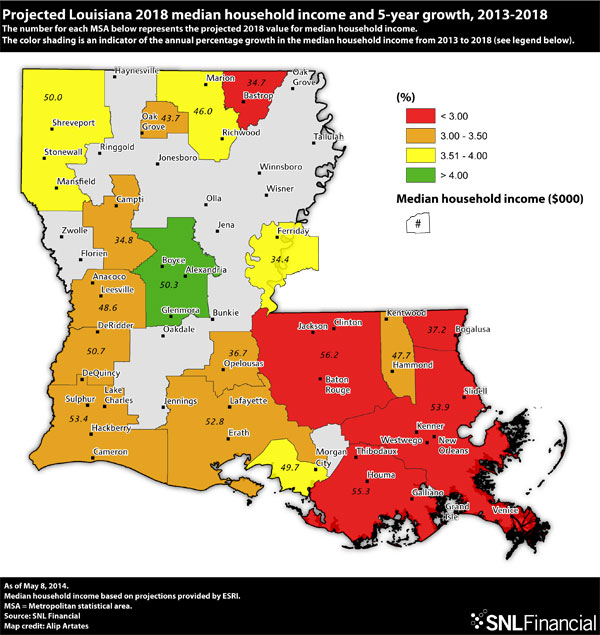