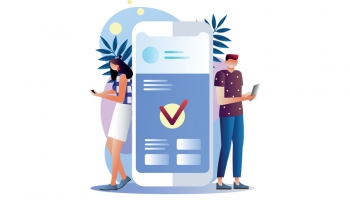 US middle market companies rated regional banks for their service during the COVID-19 crisis but the increased emphasis on digital banking has given national banks an advantage, according to Greenwich Associates.

During the pandemic, the largest US banks accelerated their rollout of digital solutions.

In a survey of middle market companies in the third quarter of 2020 Greenwich Associates found that approximately 80% rated national banks as “excellent” or “above average” in terms of the help they provided during the crisis.

Liquidity and flexibility on credit terms amid challenging business conditions were top of the list for companies when assessing bank performance during the crisis last year, while digital capabilities rose to become a main priority as firms switched to remote working, Greenwich Associates said.

Among commercial banking customers who switched bank providers in 2020, 35% cited better online banking capabilities or services as a primary reason for making the move, compared to a quarter in 2019.

Chris McDonnell, head of digital benchmarking, banking and CEM at Greenwich Associates, said regional banks had struggled to keep pace with the digital investments made by national banks before the crisis, with that gap “poised to get even wider” due to Covid-19.

Greenwich announced the findings as part of its 2020 Excellence Awards for the US banking sector.

The 2020 Greenwich Share Leaders for US Middle Market Banking, which identifies the providers representing the largest market shares in commercial banking among businesses with sales of $10 million to $500 million across the US, were Wells Fargo, Bank of America, Chase, PNC Bank, and Truist.

Regional banks picked up the most accolades in the US Middle Market Banking category, in recognition of their “high touch service models”.

Community banks Pinnacle Financial and Fulton Bank were among those recognised in several categories in the Excellence Awards, including for ‘overall satisfaction’, ‘likelihood to recommend’ and ‘customer service’.

McDonnell said: “Since these awards are based on client ratings of the service received from banks over the past 12 months, the number of regional and community banks appearing on the list this year shows they hustled their way through one of the most challenging business environments on record.”