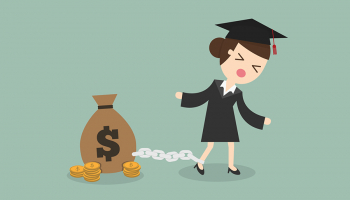 The pause on student loan payments that has gone on for over two years is supposed to end at the end of the month if the Biden administration does not extend it. Borrowers are hoping the break will continue, and perhaps announce $10,000 in loan forgiveness.

However, most Americans are not so sure that is the best thing for the country. Borrowers include more than 10% of the entire U.S. population, effectively giving a high percentage of the country a tax break for at least part of more than $1.5 trillion in federal student loans.

The number one issue that Americans have focused on in going to the polls this fall is inflation concerns, and this plays into skepticism on more government handouts that reached high levels during the pandemic. Additionally, older Americans have expressed frustration that they had to pay student loans back as well, and yet do not receive the same benefit for loans that have already been paid off.

A poll by CNBC stated that 59% of Americans are skeptical of the program and 30% of all adults say there should be no student loan forgiveness for anyone, with women being much more sympathetic to loan forgiveness than men.

In general, surveys have shown that democrats are much more sympathetic to loan forgiveness than republicans, with conservatives pointing out that the borrower agreed to the terms of the loan to begin with. However, analysts have also pointed out that it can be considered a tax credit for the educated, while still leaving those without a college degree even further behind.

Small business loans are often given to Americans with a high school education and no further, and nobody is calling for loan forgiveness for these individuals. Democrats thought they had a winning issue, but it does not appear to be as clear cut given the present economic trends. The decision will effecting lending trends for the remainder of the year and into 2023.