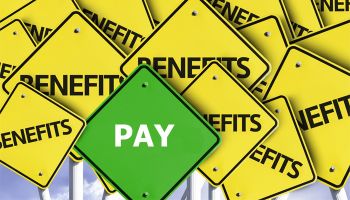 The effects of these pressures can be seen in the annual Crowe Horwath LLP Financial Institutions Compensation and Benefits Survey. Every year Crowe surveys U.S. financial institutions about compensation trends, benefits, incentives, and other human resource issues. This article, the first in a series exploring results from the 2014 survey, will focus on ways that banks are moving beyond cash compensation alone to attract and retain talent.

The Crowe survey collects a variety of data in addition to salary and bonus information in order to provide a more comprehensive, well-rounded picture of the employment relationship.

One of the most widely recognized methods for evaluating the entire employment relationship is the total rewards approach advocated by WorldatWork, a not-for-profit human resource association with more than 70,000 members worldwide, which provides education, certification, and research into a variety of human resource issues.

As outlined in the WorldatWork concept, the total rewards model addresses five elements that collectively define an organization’s strategy for attracting, motivating, and retaining employees:

1. Compensation: Both fixed pay and variable pay tied to performance.

3. Work-life: Policies and programs to help employees achieve success both at work and in their home lives.

4. Performance and recognition: Programs designed to support business goals and acknowledge those employee actions and behaviors that support these efforts through both cash and noncash incentives.

Companies that are regarded as employers of choice are not necessarily known for being the highest paying. Instead, they find other ways to make their organizations attractive, through the other four elements of the total rewards model.

Total rewards advocates contend such an approach often can provide a higher return on the total human resources budget. They point out that the monetary value of a pay raise or cash bonus is clear and straightforward—a $1,000 pay raise is valued by the employee as $1,000.

But other parts of the total rewards model are valued more subjectively and can be perceived by the employee as being of much greater value. For example, an employee might place much greater value on a flexible paid time off (PTO) policy that allows attending once-in-a-lifetime family events or dealing with personal crises. The intrinsic value an employee places on such opportunities could greatly outweigh the actual cost an employer incurs implementing such a policy.

Base pay and incentives stabilizing

The significance of the total rewards approach in the banking industry is becoming more evident since, as the 2014 Compensation and Benefits Survey indicates, base pay rates are beginning to stabilize, as shown in Exhibit 1.

Over the past three years, salary increases have averaged 2.9% for officers and 2.7% for nonofficers. Market stability is indicated by the return to a pattern in which actual increases in a year match the increases that had been previously projected for that year. This is a noticeable change from the recession years of 2008-2010, when actual pay increases varied widely from previous projections.

Similarly, direct cash incentives also are stabilizing, as seen in Exhibit 2, which measures incentive pay as a percentage of base pay. 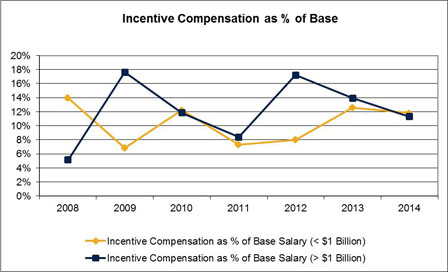 The disparities between large and smaller banks (as measured by asset size) have diminished, and average incentives appear to have settled into the 12% range, after fluctuating significantly during the recession years.

A deeper dive into the survey responses reveals indicators that suggest more banks are adopting strategies that reflect the total rewards model.

For example, every year survey respondents are asked to compare their compensation strategies to those being pursued by their competitors and to rank their own strategies as “above market,” “at market,” or “below market.”

For the past three years, the number of respondents who said they pursue above-market compensation strategies has steadily climbed. But that fact alone does not tell the entire story. When participants are asked about specific elements of compensation, a more nuanced picture emerges. 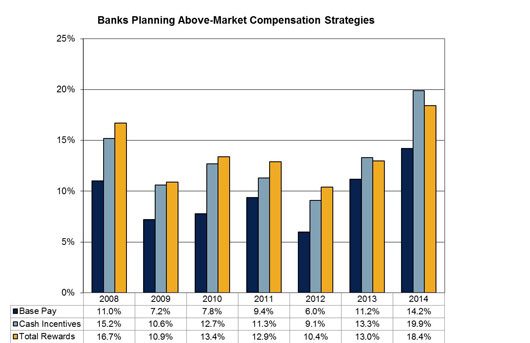 What’s more, the disparity among the three measures is growing each year. This would seem to suggest that when banks choose to compete more aggressively for talent, a greater proportion of their increased expenditures is allocated to performance-related incentives or other rewards.

Other components of total rewards

Although banks’ stated compensation strategies suggest some movement toward the total rewards model, it must be noted that the shift is still quite subtle. 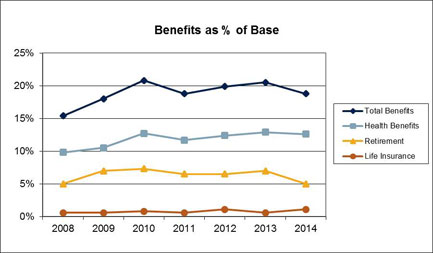 On the other hand, there have been some significant increases in the percentage of banks that offer certain noncash employee benefits such as flextime; health club and wellness programs; formal PTO programs; and employee assistance programs to help employees deal with personal problems or events.

The growing popularity of such programs is not always noticeable from year to year, but when the 2014 survey results are compared with our 2008 pre-recession survey, the differences are quite apparent. 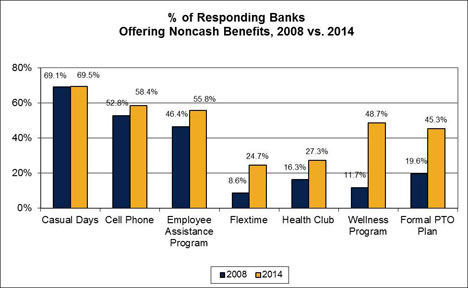 Such programs exemplify the multifaceted approach to employee well-being that is the essence of the total rewards concept.

Making the most of total rewards

The ultimate success of the total rewards approach in any organization depends on how actively employees use the various elements. Knowing which components will be most highly valued requires listening to employees’ stated preferences as well as publicizing and encouraging employees to take advantage of the benefits offered.

One effective tactic many banks use: Providing all employees with an annual total rewards statement summarizing the value of their overall compensation. Such documents display: salary, bonus and incentives, health insurance premiums paid by the employer, and 401(k) or other retirement contributions. In addition, the statement spells out the estimated monetary value of various noncash benefits.

Such statements remind employees of the value the bank is contributing. But they also promote awareness and encourage greater use of benefits that might otherwise be overlooked. In this way, the annual benefits statement helps the bank and the employees alike to derive as much value as possible from the associated costs.