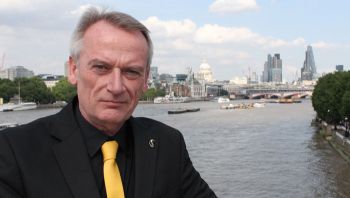 Digital Banking author Chris Skinner believes bankers must rethink the role of banks going into the future. No long can they be front, middle, and back office, he told attendees at BAI's Retail Delivery Systems conference

Chris Skinner, chairman of the Financial Services Club and author of Digital Bank, is well-known for his future-views on the impact of technology on banking, and he offered peek into that future during a recent presentation at BAI’s Retail Delivery Systems conference.

Banking today is really nothing more than the transmission of value through bits and bytes, said Skinner. Bankers need to embrace this digitization by transforming their physical structure of buildings and people into a digital distribution of data based on a global network.

Of course, the distribution must be in real time.

It’s heady stuff, but Skinner is adamant that banking “needs to be turned on its head” if bankers want to compete with the slew of financial technology companies that are threatening to disintermediate banking.

How it will happen

Mobile technology gives the 7 billion people on our planet the ability to connect and trade value with each other instantly for very little cost.

The other technology that is digitizing banking is blockchain.

Considered by many to be the most innovative part of Bitcoin, a blockchain is a public ledger of all bitcoin transactions that have ever been executed with a given bitcoin. Almost any document can be digitized, codified, and inserted into a blockchain. Blockchains are a trusted and almost free way to exchange value, explained Skinner.

Swiss bank UBS is taking a close look at blockchains, creating a technology lab in London to explore how to use the technology in banking. Skinner believes other financial institutions will follow suit.

“By allowing payment and settlement, blockchain will transform the infrastructure of finance,” predicted Skinner. He cited statistics from Goldman Sachs estimating that 7% of bank profits will move to peer-to-peer marketplaces enabled by blockchains over the next five years.

Banks should be worried, said Skinner, asking, “How can you make money when credit is free?”

The answer, according to Skinner, is to rethink the role of banks in financial services. Rather than trying to own the front, middle, and back office, Skinner suggested that banks partner with financial technology companies and become integrators that bring innovative technologies such as mobile and blockchain together to create a seamless experience for customers.

“It’s stupid, in 2015, to have costly and unsecured processes layered with paper,” said Skinner. “Instead, we need to work with financial technology companies to digitize banking.”