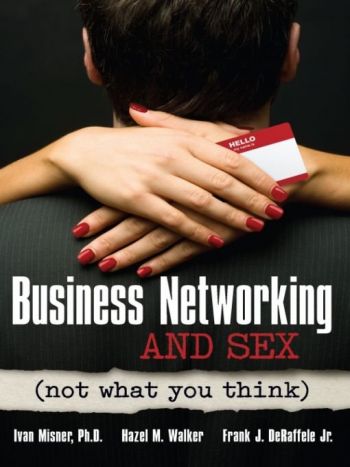 This is one of two reviews of this book: One view from each gender. To read the other, from a man banker's viewpoint, click here. To read the book editor's introduction to both reviews, click here.

"Women are great at building networks, and now it's time to learn that it is OK to leverage them."

Men and women are different in many ways, most of which we could all list off the top of our heads. But do these differences affect the way we do business?  The representative quote above from the team of Misner, Walker, and De Raffele, would indicate that we do do business differently, and that we haven't benefited as much as we might.

So can we gain insight from examining this disparity, in order to work more effectively with one another?

Such is the premise of Business Networking and Sex (not what you think). Lascivious title aside, the book seeks to define the differences between how men and women communicate in a business-networking context. The book relies on a survey of more than 12,000 professionals, nearly evenly split between men and women.

The authors are all highly experienced professional networkers. Throughout the discussion of the survey results, they interpret the findings through the lens of their expertise and use that as a springboard from which to detail flaws behind common behaviors that reduce the effectiveness and profitability of professional relationships between the sexes.

They explore topics like, "Are women better networkers?", "Are men's and women's definitions of success in networking different?", and "What role does emotional intelligence play in communication style?" The authors also explain the importance of certain networking techniques like following up, tracking results, and actually asking for referrals.

But despite a strong start--and a stronger finish--the authors' lessons fall flat amidst trite stereotypes and inane banter. And, frankly, sometimes, they parade common sense as insightful commentary.

For example, the authors describe their belief that men view networking interactions in a transactional way. They believe that men "hunt," as did their forebears, but for a sale rather than for game to feed their families. On the other hand, they say, women view these exchanges as a relationship that must be built and nurtured, often by helping the other without receiving an immediate return, before they feel comfortable benefiting monetarily from it.

This may be a fair point. But it is brought up and re-explained far too many times throughout the book.

In fact, stretching just a few key insights into more than 200 pages forces the authors to expand their interpretations to extraordinary lengths that lead them ever-farther from their area of expertise. Allusions to "primitive" man and our "ancestors" and their tribal behaviors appear repeatedly as a means to justify the authors' conclusions.

For instance, the authors recognize the importance of one survey respondent's comment about how he or she routinely observed that men exchange business cards at the beginning of a conversation, whereas women more often wait until the end. But they do not stop at commenting on the significance of that difference in a business context, explaining the greater implications of the difference, and then advising men and women to be aware of and to adjust to the other gender's preference.

De Raffele explains the difference between the business-first and relationship-first mentalities by likening them to our "primal" behaviors. Men, he says, are not trying to build a "forever relationship" with the prey they are hunting. He also explains the difference between the expectations of the time each gender allows for business connections to develop:  "Male contributions to the tribe, like shooting a buffalo, happen in a matter of minutes, whereas the female contributions, like growing food, require tending for months."

I disagree with this claim for many reasons. However, my first thought was that De Raffele fails to recognize the importance of unified effort and cooperation among hunters in tribal societies. (Can you imagine the trust it must require to run off into the bush with a group of fellow armed men?) He also incorrectly identifies hunting as the most important male contribution to patriarchal societies. Living together in groups requires teamwork, and the greatest responsibility of the leaders is maintaining the cohesion of the group to keep the team functioning effectively. In my experience, such leadership absolutely requires strong relationships developed over time and based on trust and loyalty.

The authors' attempts to include references to prehistoric culture injure their credibility the most in my eyes when De Raffele mentions dinosaurs on two occasions, stating that, "humans have been networking since dinosaurs were their biggest worry," and that men "used to slay dinosaurs with sticks and stones."

Interesting discussion and interpretation of the survey's findings is further interrupted by stereotypical and anti-male comments and playful jibes between the male and female authors. De Raffele repeatedly makes self-deprecating apologies to women for men's behavior. It's true that some male survey participants gave sexist or otherwise inappropriate comments, but I would have preferred a more objective analysis rather than blatant pandering that can often be interpreted as condescension.

The stereotyping reaches an unexpected apex in a downright silly list of "what she says" versus "what she actually means." I was surprised the list did not include "Do I look okay in this dress?"

Walker--the woman of the team--illustrates the importance of quality contacts by comparing them to nice shoes that you have forgotten about in the back of your closet. She warns women readers to avoid filling our closet with "cheap shoes," which are shallow business relationships.

Because if you want women to understand a concept, you should use a shoe analogy.  Come on, now.

And now, back to the survey's facts...

The book's foundation, as mentioned, is that survey of 12,000-odd people. While some of the interpretation and discussion of the survey results is problematic, unfortunately much of the presentation of the data is also unclear. The book contains many tables that show the totals and types of responses to survey questions by the gender of the respondent. But the percentages were most often given in relation to the total who gave a certain answer rather than the total who responded to the entire question.

A detailed analysis would be too dense to include here, but suffice it to say that the authors' analytical methodology skews the findings by relating the male and female responses within a single response option (as in, "55% of the people who said ‘yes' were female") rather than comparing them to the total number of male and female respondents (as in, "90% of all females responding said ‘yes' "). This attempt to indicate differing responses between the sexes only shows the magnitude of the spread between the number of men and women who gave an answer, rather than defining their absolute, and more relevant, values.

Distracting fluff may keep many readers from later value

I felt a sense of foreboding before I even started reading the book because the authors chose a suggestive title where a more mundane one would do. I was disappointed to find that the innuendo did not stop there. The text reads like a self-help book, not a serious consideration of important business practices. But despite that, Business Networking and Sex does contain some valuable information.

Unfortunately, though, some of the most helpful discussions, on the importance of following up; the time commitment and effort required to network effectively; and methods for systematically tracking networking activities and results, are confined to the final chapters of the book and span only about 35 pages. Through these sections and the introduction, the reader gains much of the important knowledge that the book offers.

Chapter 9, "Your Best Networking Self," is a four-page summary of the entire text that contains the most helpful findings of the survey and provides plenty from which any capable professional could draw his or her own conclusions.

While much of what I dislike about the book is meant to be amusing to the reader, I found that it takes away from the serious point that networking is tremendously beneficial. And the banter and such actually undermines the authors' premise that the differences between the communication styles of men and women are worth studying.

So what is the key take-away message from Business Networking and Sex?  The comments from one survey respondent say it best:

"Generalizing about men and women, rather than distinguishing between personality types, can be dangerous. The most successful networkers just evaluate people as having a need, and then find the best way to help them."