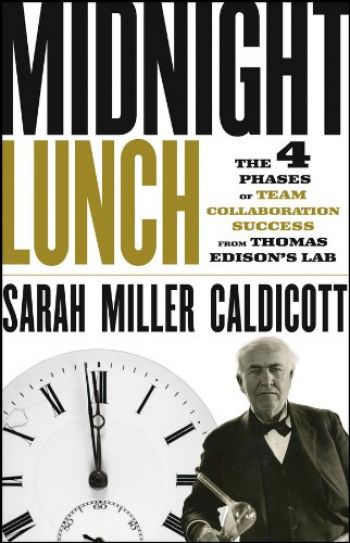 “If we did all the things we are capable of doing, we would literally astound ourselves.” —Thomas Edison

There is little debate that Thomas Edison was one of the greatest inventors, innovators, and thinkers of his day. To this day, when we want to symbolize ideas, what do we use? A light bulb, of course.

Edison’s work in the early 20th century produced many inventions which are now considered necessities. One of the methods Edison used to accomplish his astounding 1,093 US patents was the process of collaboration. And that’s something nearly every part of the banking industry has in common, from new product design to preparing for the upcoming new mortgage regulations.

Edison’s phases of collaboration are described in Midnight Lunch: The 4 Phases of Team Collaboration Success. Written by Sarah Miller Caldicott, a great grand-niece of Edison, these four phases are explained to not only illustrate Edison’s work processes but also to assist the workers of today move ahead. Even though we may see ourselves as light years ahead in technology, the ways of Thomas Edison can still have a great benefit on our methods of thinking and moving into the future.

“In an age of when many speak of Thomas Edison and Steve Jobs in the same breath, it’s important to refresh our understanding of the pivotal role collaboration played in Edison’s innovation prowess,” writes Caldicott. “He viewed collaboration as the beating heart of his laboratories, a sustaining resource that fueled the knowledge assets of his sprawling innovation empire.”

As I picked up this book, I was asking myself what exactly is this “collaboration” that it warrants a book to be written about it?

My previous opinion centered on less-than-savory ideas of conspiracy or of several individuals acting together for some dishonest or illegal activity—think of  how “collaborator” was such an insult in World War II movies set in France.

“A continuous force operating within an environment of complex interactions. True collaboration for Edison operated like an invisible glue that fused learning, insight, purpose, complexity, and results together for one continuous effort. This fusion offers a unique mélange we can leverage in establishing true collaboration in teams today.”

This introduction then leads to the four phases of true collaboration used by Edison. The phases are titled: Capacity, Context, Coherence, and Complexity.  A chapter is dedicated to each of the four phases.

The need to use collaboration is also given a chapter. According to the author, teams are needed for the fast-paced changes in technology; the need to draw together individuals from broad differences in economic and technological opinions; and the need to create and harness the growing flexibility that is becoming more and more available with smart devices.

Edison was able to achieve so much in part because of this team approach. A group of very unlike individuals were given freedom to be creative and develop further with each new innovation. It is a process that has been shown to be successful. In the description of the process that Edison used, I found it difficult to understand how it could be applied in today’s highly competitive, individualistic attitude in many corporate cultures. But read on.

The use of collaboration is intriguing. As the book examines each of the four phases, there is ample reasoning for success. The chapter on Capacity begins with several questions on whether the organization is beginning with the right attitude. Queries such as “Is there an opportunity to create new knowledge through our team’s efforts? And could sharing the learning we generate benefit others beyond our team?” could be very telling to the culture of the organization. The chapter also provides exercises as a guide to learn how to work together as a group.

The chapter on Context provided more direction to creating an environment for collaboration, but for me, it was also a personal encourager. Edison was deaf in one ear for most of his life, which gave some context to his interest in sound and communication. He was also an avid reader which helped develop new context. This chapter gives real examples of how business leaders benefit from intensive reading.

Phase 3, Coherence, is about building teams. In Edison’s work, “a sense of purpose moved through Edison’s labs like a kind of osmosis, yielding an emotional connection between the daunting projects Edison conceived and the pioneering spirit they called forward in his workers.”

It is not hard to imagine how such a sense of purpose would draw team members together to see what can be accomplished that is new and beneficial for the world.

The final phase is Complexity, which is the development of collective intelligence. The wonder of Facebook and the Apple iPhone are given as examples of this principal. Both have been able to move millions of people to the same desire to be part of something innovative.

This chapter ties many of today’s technological wonders to the similar innovations in Edison’s day: the advancements were the results of extraordinary work to bring the unknown and unbelievable to reality.

Where we can go …

Chapter 7, the final chapter of the book, brings it all together with “A Look in the Future.” The need and benefit of collaboration is emphasized with real examples of concerns amid observations of our culture today, especially in the business and the widely varying views of different generations. The chapter is a good closing for a discussion of the need for collaboration.

The book is one that required me to read it with intention. I could not casually pick it up and read a few pages when I had time. Yet my appreciation for the book in general, and the process of collaboration specifically, has grown as I focused on this review.

I can see how this process could be a game changer for many businesses because of the radical change in culture that would result from true collaboration. I also have a greater respect for Thomas Edison and his work.

More in this category: « If Greenspan had it to do all over again … The bigger they come … »
back to top