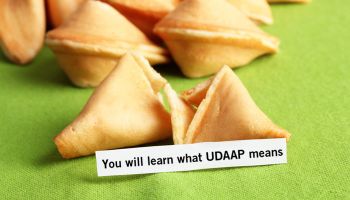 When it comes to UDAP, hindsight is perfect.

It is looking ahead that is out of focus.

And ahead is where the danger is.

Right now, bankers are looking forward with a high level of anxiety, wondering if things done today will be deemed unfair, deceptive, or abusive at some time in the future.

A deep dose of the future tense

Consider the mortgage servicing companies that were hit with an enforcement action. The UDAAP charges were based on letters sent to all owners of escrow accounts that were projected to have a surplus. The letters promised that the surplus would be paid back to the borrower with a check.

What the system did not do was track customers who were delinquent. Being delinquent raised two potential problems. Principal was overdue and the lack of payments meant that nothing had gone into escrow either.

Recipients of the letters, including customers who were in various stages of delinquency, looked forward to receiving their check. The delinquent customers did not get checks—and were very disappointed.

Bureau’s view of the “facts”

Not in the opinion of the bureau. Instead, as the bureau saw it, these consumers—who were not paying their bills—were given a mean surprise.

Each entity was doing its job. Missing was communication between two operating silos. The result was that all escrow account owners got the letter, regardless of their loan status.

CFPB’s case against the servicers is based on the fact that the information in the letters was, for delinquent customers, not true. Besides that, it was not nice to get their hopes up and later dash them.

“Reasonable”: Word in search of a definition

The UDAAP tests are based on the “reasonable consumer.” Reasonable, of course, is not defined.

Of course, banks reasonably expect customers who are delinquent to know that they are behind in payments and owe money. The fact that any responsible-yet-delinquent consumer should have realized that, by being delinquent, they would not have a surplus or that any “surplus” would be used to catch up the escrow account, did not enter into the bureau’s thinking. Instead, it was “reasonable” of these delinquent consumers to expect a check.

While most lenders would consider that a reasonable consumer who was behind on their payments would not expect a check which they could spend at will, this is apparently not the measure for “reasonable.”

What constitutes a reasonable consumer, the core test for UDAAP, is precisely what is unclear—except with hindsight.

So UDAAP is an unmapped risk, clarified only by hindsight. Missing a UDAP problem now can be costly later.

This being the case, what are banks to do?

The glib answer is to look ahead. But how?

Any situation needs to be looked at from all directions and from all viewpoints.

Move the prism and the pattern changes. No single pattern is the right one. They all are. So they all need to be considered.

• How will this product or service seem to the consumer in the future?

• How will it seem to the consumer if things don’t go as planned?

• Are the remedies clear?

• Are the remedies fair?

In product development, marketing, policies, and procedures, the bank needs to look at and consider the item from all vantage points—especially those of the consumer—reasonable or not.

Someone on every team should have the responsibility of thinking like a consumer and looking for ways the consumer can raise UDAAP concerns.

And the team should listen to any concerns the consumer stand-in raises.

Everyone must ignore what traditional bank-think (safety and soundness mindset) would say about the consumer.

The fact that a consumer writes a check without funds in the account to cover it, or is late on loan payments should not be used to justify an action or to disregard the consumer’s viewpoint.

After all, the CFPB concluded that significantly delinquent mortgagors were reasonable to expect an escrow surplus check.

This review and thinking process may seem to be an unnecessary expense. It may slow things down.

But it should save exposure and costs in the future.

Ignore UDAAP issues now and your reputation is at risk—along with the funds you would need to pay attorneys.

More in this category: « New law washes away some Biggert-Waters damage Complaint handling is a reputation risk »
back to top