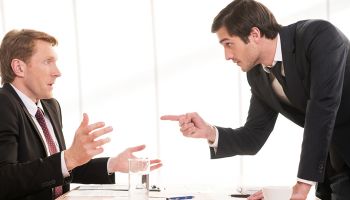 One of the hardest things is to admit that you made a mistake. But in this blog I’m going to talk about how doing so can help your bank’s credit function improve itself. We’ll start with a scan of what’s gone on, and why looking back in a different way may be healthier for your bank.

Avoidance of personal responsibility seems to be a current and very real affliction of today’s workplace. We’ve witnessed the sorry spectacle of some of the world’s largest banks being fined and penalized for a variety of truly awful behaviors—aiding and abetting tax evasion, circumvention of anti-terrorism money transfer prohibitions, price fixing, fraud on the banking public.

Few individuals have been seen to be paying any sort of “real” price in the personal sense. Someone may lose their jobs, but there’s been no general clawback of bonuses or much further legal activity. One can count on the fingers of one hand the individuals actually sentenced to prison.

This tendency to avoid blame isn’t new. It became a matter of public discussion in the 1930s when Dr. Karl Menninger of the Menninger Clinic famously observed that society had seemingly lost its sense of “sin.” Recall 15 or so years ago the very public spat between Ford and Firestone over the factory-installed tires on Ford Explorers. I summarize it this way: “It’s a design issue, Mr. Ford.”  “Not at all, Mr. Firestone, the problem is with your tires.”

The latest and very public evasion of responsibility occurred last week during a public appearance of Richard Fuld, former CEO of Lehman Brothers. He would not accept responsibility for the condition of the firm immediately prior to its collapse and bankruptcy in the fall of 2008, an event widely recognized as the nadir of the worst banking and financial crisis of our time.

Time to examine the bigger picture

While it may be human nature to seek to avoid blame and responsibility for any type of calamity or misfortune, overall, this is harmful to the perceived integrity of the management, governance, legislative, and regulatory processes of our economy.

It’s bad for business. Individual honest bankers laboring under the industry-level reputation cloud of being “greedy” and “untrustworthy” understand this very well.

Searching for culprits and affixing blame may be satisfying to some. But it’s a huge misdirection of human energy and management attention.

What I propose is an organized, systematic program of “What have we learned?”

I am not proposing some academic exercise nor another commission or committee. We’ve had all that.

But if this is done from the perspective of what failed on the loan level at every institution, without any specific objective of blaming anyone or “taking names,” we should get a much better level of cooperation from our staffs and our customers too.

This process should be thought of as a strategic objective of “Continuous Improvement.”

Dare to look back and learn

The government in recent years has been doing formal reviews of bank failures where the costs to the Deposit Insurance Fund have been large and where the negative results of these failures have been significant. The purpose of these reviews has been to figure out what went wrong so that government supervisory processes can be improved.

My recommendation is that living banks should conduct this sort of activity themselves. Do it on a more or less continuous basis, or at least frequently enough where lessons learned can be swiftly implemented.

From a credit perspective, the principal areas of inquiry should be loan policy, lenders’ track records, incentives, and internal controls.

Here are some of the things I’d examine carefully—and regularly—if I owned the bank.

• Was the policy honestly observed? Or routinely violated as evidenced by a long trail of seemingly minor exceptions?

• Was there a breakdown of appropriate use of lending authorities where lending ladder concurrences had possible indications of “log rolling?”

• Is the committee structure doing what you expect it to do, in terms of communications, reinforcing standards and as a tutorial?  (And, by the way, a clear statement of what those expectations are would be a good starting point.)

Consider having wide-ranging discussions, perhaps facilitated by someone outside the lending area, to help forge a consensus on what needs to be done to fix identified problems.

This is a process, and should not be treated as an event.

Lending money is an inherently risky business. And we all know that some do it better than others.

• Do we systematically collect information on the quality of individually assigned loan portfolios?

• Do we look for and track trends or defined weaknesses in staff handling of portfolios that need to be addressed by individual correction or by enhanced training?

In my experience, Loan Review typically performs that role. But sometimes it’s with more enthusiasm than is appropriate in a collegial environment. That’s the big risk here and you’ve got to be sensitive to it.

The goal is improvement, not “gotcha!”

Incentives change behaviors. They work. But we’ve all seen that unintended consequences are possible.

There have been very visible examples at the largest institutions and the notion has taken root in the public mentality that greed has been the overarching cause of the scandals and bad behaviors.

A more nuanced view is appropriate. But there’s no question that some companies incented, perhaps unwittingly, the wrong behaviors.

No culture is safe or secure without strong internal controls and the will to enforce them rigorously—even ruthlessly—when necessary.

Any manager who sees and ignores a breach of policy—or of acceptable decorum for that matter—has just set a new standard.

How many of us have winked at inappropriate behaviors or simply ignored a situation to avoid “unpleasantness?”

If you are thorough in your analysis of Lessons Learned and honest with the conclusions, I’ll wager that tolerance of such infractions will be a larger contributor to adverse outcomes than you may have imagined.  It’s called “lowering the bar.”

This isn’t a hard or mysterious process.

You owe it to your principal constituencies to do a formal Lessons Learned process on a continuous basis. There will be things to fix. But there will be causes for celebration as well.

It will also be harder to shirk one’s individual responsibility, which is where this blog began.

And ensuring responsibility is a very worthy objective too.

More in this category: « Are your messages like unshined shoes? What’s your North? »
back to top