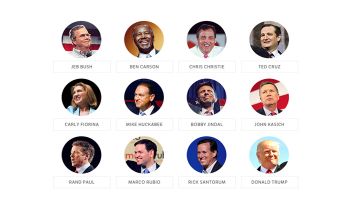 Banking came to the forefront during the most recent Republican debate. But blogger Ed O’Leary found most candidates seriously uninformed on these issues.

In watching the Republican debate this week, I was struck with a sense of unease, as some of the candidates noisily proclaimed their positions on the subjects of Too Big To Fail and governance of the Federal Reserve System.

Both topics are urgent, of far-reaching importance, and deserving of much more than a series of canned talking points. Unfortunately, that’s about all we got on those subjects the other night.

Governors Bush and Kasich are the only candidates in the large Republican field who have actual “banking” experience.

Governor Kasick served as a managing director of Lehman Brothers between 2001 and 2007. Governor Bush, before entering politics, worked for Texas Commerce Bank and served as a vice-president and branch manager in the bank’s Caracas, Venezuela office. After leaving the Florida governorship, he served several years as an advisor to Lehman Brothers’ private equity group.

The participants’ exchanges on banking-related topics were occasionally heated. Notably both Kasich and Bush vowed to permit a large bank to fail rather than permit it to receive any direct federal assistance. The question was ultimately framed explicitly in terms of hypothetically permitting Bank of America to fail and both men “promised” that indeed they would.

At no point was there a rational discussion of the economic losses to be inflicted on “innocent” third parties and even more amazing, there was not a single mention of federal deposit insurance administered by FDIC that insures each depositor to $250,000.

I can’t fathom the idea that third-party losses would be of no material consequence and therefore need not be considered.

Figuring out role of “SIFIs”

Prominent in the thinking of some, including Bush, is the notion that the very largest banks, those possessing elements of systemic risk to the financial system (referred to as SIFIs), should have significantly larger equity cushions with which to absorb losses.

That’s a plausible idea. But what effect would this have on a bank’s Return on Equity ratio? ROE is the ultimate test of how well any enterprise produces an economic return for its owners. How should such a predictable consequence be squared with the need for healthy returns to shareholders—necessary to sustain access to capital?

The simplest solution—and the one that Dodd-Frank directly addresses, however imperfectly—is to simplify the activity of SIFIs to reduce inherent risk in each bank’s business model itself.

Tom Hoenig, FDIC vice-chairman and the retired president of the Federal Reserve Bank of Kansas City, has been a leading proponent of this approach. And it appears that the very largest banks, notably Bank of America and Citibank, have been taking significant steps in this direction in recent quarters.

Debaters take up the Fed

When the moderators’ questions turned to considerations of the Federal Reserve System, certain of the contenders advocated more governmental control of the Fed’s activities in regulating economic activity.

What I found deeply disturbing about this notion is the reality that no politician finds it popular to raise interest rates. That’s part of why an independent governance structure of the Federal Reserve, free from political domination or control, is fundamental to the discipline that’s necessary to promote sound growth throughout the ups and downs of each economic cycle.

Such independence requires limiting the opportunities and temptations of monetary profligacy and that in turn demands independence of the governing authorities from political meddling.

I can tap my own experience in this regard.

When I arrived in Midland, Texas, at the height of the oil price boom in the early 1980s, the rate of interest on my home mortgage was 12%. Can’t say I liked that rate. And the only thing that saved me from an enormous mortgage payment was a decent-sized equity owing to the sale of my previous home in Florida.

But the Fed had to push interest rates high for a key reason: runaway inflation. How would Paul Volcker, then the Federal Reserve System’s chairman, and his colleagues, have tamed the inflation that had taken hold in the 1970s? Performing this task required independence of action free from political domination and influence by the Executive Branch and the Congress.

Do candidates get it?

A few days after the latest debate, I am both disturbed and disheartened. Viewers that night witnessed a combination of a serious lack of understanding of our nation’s economic history or a deliberate and selective shading of that history to make political points.

I think we deserve better.

There are many issues before us in the current electoral cycle. But to best understand the full range of challenges and opportunities of what we are witnessing perhaps we should consider what Pope Francis is doing as he deals with efforts to modernize and renew the Roman Curia, the central government of the Roman Catholic Church. To Francis, his efforts at reform will have no credibility if they do not start with fiscal responsibility.

This may well be a central lesson during the current political season in our country as well—and considering the words and actions of the candidates of both political parties, we are off to a bad start.

More in this category: « Regulatory ruckus highlights industry pall Budget time: Looking in the right places? »
back to top