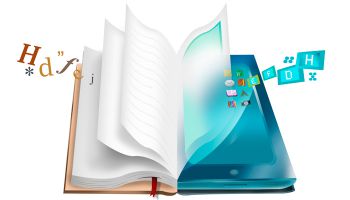 Remember when the terms “big data,” “blockchain,” and “tokenization” were new?

Seems kind of quaint now, somehow, to think that way. These terms have all become mainstream and have been incorporated into the ongoing technology evolution/revolution. All carry huge backstories with them.

Well, don’t get too complacent. A slew of new terms continues to enter the financial technology lexicon. Today everybody in banking is going to have to, at the least, place these terms in their proper context, if not understand them completely.

What follows is a somewhat random list of new terms that have cropped up. There probably are, and most certainly will be, many more. So hold on to your hats. In “tech years,” these terms will be standardized, overtaken, or re-termed before the next print dictionary comes out.

Let’s start with the relatively easy ones.

A2P—This refers to the process of sending mobile messages from an application to a mobile user.

It’s sort of like P2P, which is the sending of a message from one person to another person. It is also known as enterprise or professional SMS.

John Tan, writing in the online blog Sinch, quotes (somewhat old) Juniper Research that predicts that more than 2 trillion A2P messages will be transacted globally by 2018.

A2P has actually been around for a while, especially in the banking world. Examples of such messages include banking notifications, critical alerts, two-factor authentication, automatic booking confirmations, loyalty programs, and marketing notifications.

At least now, though, it has a name.

Gig Economy—This refers to the ability for millions of people, empowered by advances in digital technology and often motivated by difficulty finding full-time work, to rely on temporary engagements to earn a living.

A survey by ReportLinker estimates that one in ten employees have exited full-time, permanent jobs and instead work at temporary or freelance assignments as independent contractors.

One would immediately think that this would apply mainly to millennials. While they certainly are apt to embrace the gig economy, many other demographics figure prominently, according to Bank of America Merrill Lynch.

They could include women getting back into the workforce after raising a family. Mid-career professionals looking for a more flexible lifestyle. Or aspiring entrepreneurs, moonlighters, and retirees whose talents remain in demand.

“Many retirees aren’t quite ready to stop working, so they’ve created gigs to stay busy and enhance their finances,” says Karin Kimbrough, head of Macro and Economic Policy at Bank of America Merrill Lynch.

As important as technology is to such workers, they represent a growing market for specialized financial planning from their financial institutions.

Okay, now it starts to get more complicated.

Chatbots—While we’re familiar with our devices talking back to us—such as the years’-old Siri on the iPhone—eventually we’ll be able to talk to the device and tell it to conduct mobile banking functions and even transactions.

“Frequent banking requests are pretty straightforward (e.g. `Send this person X amount of money,’ or `Transfer X amount from savings to checking’),” says Stephen Greer, analyst at Celent. “Bank-owned chatbots are also more built for purpose than some of the multipurpose third-party products on the market, making the functional scope targeted. While chatbots are still in the very early days, it won’t be long before these kinds of interactions are accessible and the norm.”

Meanwhile, MasterCard recently announced that it is making commerce with its cards more conversational by testing chatbots for banks and merchants.

“With the Mastercard bots, partners can have a true dialogue with consumers and provide personalized service, seamless user experience, and contextual offers and rewards,” the company’s announcement says.

Contextual banking—This has everything to do with improving the customer experience.

Says the ebanking blog Crealogix, “In the customer experience ecosystem, the value of the bank will be about how useful and relevant the bank is in day-to-day interactions.”

The blog continues: “For instance, mobile payments work not because customers can use their phones as a credit card, but before they make the payment. They can see their account balances, and when the transaction is completed, they immediately see a newly adjusted balance on the screen. And this gives birth to many contextual opportunities that banks could capitalize on.

“For instance, when a customer is about to buy a refrigerator, his smartphone may show that if he buys it he will default on his mortgage payment, or if he uses a particular credit card, he might be entitled to an interest-free line of credit.”

In summary, the blog says, “Banking today must be contextual to satisfy the demands of the new mobile customer. Its services must be offered entirely at a customer’s convenience, without causing stress or hassle when a purchase needs to be made on the go. It is only going to get harder for banks to engage customers if they don’t have a competent digital strategy that happens in real-time and is based on customer behaviors.” [Emphasis added.]

Which leads back to:

Electronic assistants—“What if consumers could perform their basic banking tasks without ever having to open up their banking app?” asks Dan Latimore, senior vice-president of Celent’s Banking Practice, in a speculative blog. “They could say, `Siri, what’s my bank balance?’ or `Alexa, pay the water bill out of my main checking account.’ While we’re not there yet, consumer desire for convenience (aka `seamlessness’ or the `frictionless customer experience’) knows no bounds.”

Latimore hypothesizes that these kinds of scenarios are a lot closer than many bankers might imagine.

“In the obligatory Uber example, the payment is invisible,” he says. “What happens when the consumer makes this happen in all other sorts of interactions?”

Now it starts to get hairy:

Virtual mobile infrastructure—Simply put, VMI is a means to secure sensitive company information that may be stored on employees’ personal mobile devices—the ongoing BYOD headache of corporate IT officers.

Trend Micro, a company that offers VMI services, puts it this way:

“Corporate data never gets stored on employee devices. Each employee gets assigned a profile that is centrally managed and stored on secure company servers. Employees only need to install a secure app on their device, log in, and access all their company files and data without fear of mixing personal and company data, or having IT control their gadgets.”

It gets around the drawbacks of other means of protecting company data on private devices, such as mobile device management, which is seen as overly invasive, or app wrapping, which requires proprietary patching of apps that affects licensing and updating of said apps.

Israel Lifshitz, founder and CEO of Nubo, sees VMI as a leap forward from these and other BYOD mitigators.

How about this mouthful of silicon chips:

Robotic process automation—“Robotic process automation (RPA) is a set of technologies that enables the automation of processes that currently require human involvement. It’s a collection of configurable tools within an enterprise management framework aimed at integrating systems by replicating the actions of the user: interpreting interfaces, transforming data, and initiating/responding to events. RPA tools seek to mimic the role of the human.”

It gets even more creepy.

“[RPA] touches on artificial intelligence and cognitive technologies and what some are calling Bionics, which refers to processes that blend human and robotic inputs,” the analysts say.

Why it is important, they say, is that its use—properly controlled in specific situations and processes—could result in significant, demonstrable, and sustainable economic value.

Yet even they hedge somewhat, not only pointing out how RPA is in very early, and uneven, stages of development, but observing: “RPA can deliver significant business benefits, but it must be applied in the right places. It requires a healthy level of skepticism and pragmatism, and is not a replacement for strategic investment in IT.”

Now hold on to your hat:

Containerization platforms—This is an offshoot of what’s known as “devops,” or development operations, which in turn is the process of coming up with new banking-related applications, hopefully in a quick-to-market fashion.

The company Docker is most often associated with the use of containerization.

Paul Rubens, writing in CIO magazine, attempts to define what this is:

“Put simply, a container consists of an entire runtime environment: an application, plus all its dependencies, libraries, and other binaries, and configuration files needed to run it, bundled into one package. By containerizing the application platform and its dependencies, differences in [operating system] distributions and underlying infrastructure are abstracted away.”

Justin Vaughan Brown, writing in Docker’s own blog, attempts to relate containerization to the development of banking apps:

“For instance, a common situation is to find both Weblogic and Websphere application servers inside a bank. This means that we need to duplicate up all of the resources, skills, and processes for managing these technologies, even if we do have a valid reason for keeping both technologies in place.

“When you Dockerize your software and services, the common unit of management and operation becomes the container. In the example above, we would containerize both Weblogic, and from that point forward it would be the ͙*container* which is versioned, deployed, ran, scaled, monitored, started, and stopped all in a consistent way.”

[Brown really did use those * symbols in his quote, Making Sense reader.]

Anyway, the main thing containerization advocates say, is that it is a key concept that will help banks solve the challenge of needing to innovate in an aging, complex, interconnected software environment.

That’s probably all you need to know at this point.

A Guide To The Gig Economy

A2P And P2P Messaging—What’s The Difference?

Leapfrogging The Bank App To Go Straight To The Electronic Assistant

The Virtual Mobile Infrastructure Debate Is Mired In Myth

Virtual Mobile Infrastructure: A Better Solution For The BYOD Problem

What Are Containers And Why Do You Need Them?

Tagged under Technology, Blogs, Making Sense of it All, Fintech, Feature, Feature3,

More in this category: « Fintech: Wave of opportunity? Or tsunami of chaos? Top tech trend for 2017: humans »
back to top