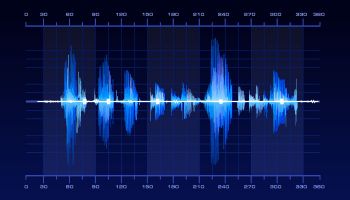 It’s no longer odd to talk with one’s phone, rather than talk into it. Apple’s Siri has been around for years now, and Android has a number of voice-activated mechanical assistants.

It’s not even so odd any more that one can talk with one’s wrist, à la Apple Watch, to activate various apps, rather than speak with another human being.

So perhaps it’s about time for banks to get on board with voice biometrics as an authentication layer.

In fact, some banks already offer this—in the United Kingdom, Netherlands, Africa, and the Middle East—and other banks and card companies have pilot programs underway now—in the U.S.

While the idea of using biometrics in general as authenticating factors has been around for a while, technological difficulties have hindered really serious consideration. Now, however, several factors seem to be coalescing to push voice biometrics forward:

• Biometrics technology is advancing in capability and acceptability—witness Apple Pay’s use of fingerprint technology to authenticate transactions.

• Voice biometrics technology, specifically, has not only advanced, but some major financial institutions are adopting it.

• Customers are getting fed up with having to remember numerous PINs, passwords, and answers to personal questions. They are growing receptive to alternative forms of security.

Regarding this last point, Inlet—which runs an electronic platform to deliver digital documents—surveyed 1,000 online consumers about password use. Three out of four respondents admitted they repeatedly have to reset their passwords because they forget them.

“Many consumers have separate log-in details for each vendor, understandably, given the spate of recent hacking attacks. However, this plethora of passwords turns online account management into a stressful experience, instead of a stress-relieving one,” the company says in a release.

One answer could be the substitution of voice biometrics.

Getting past the “who are you and prove it”

Barclays Wealth and Investment Management, in the United Kingdom, has had a relatively lengthy experience with the technology, having run it since 2012. Using the system, the company’s international banking customers are automatically verified as they speak with a service center executive. Not only does that cut the authentication time by about 20 seconds, but it enables service teams and relationship managers to focus on clients’ needs, rather than the mechanics of authentication.

“Like every financial service organization, we have a duty to protect the integrity of our client’s accounts,” says Matt Smallman, who leads the Client Experience Strategy and Change team at Barclays. "But when both our clients and colleagues told us that these processes were getting in the way of meeting their needs we knew something had to be done.”

Part of its pitch is: “A more aggressive, global approach to security is required today, and it’s one that must take into consideration the need for cost efficiency without compromising customer convenience.”

Voice authentication around the globe

The latter is an effective pitch. Here’s what various banks around the world that have incorporated the company’s voice biometric products within the past year have to say:

• ING Netherlands—“The mobile phone is more and more becoming the starting point for banking today. Already 1.9 million of our 8 million customers use our mobile banking app today. It is our intent to deliver an easy experience for our customers who are accessing their accounts via our mobile app,” says Max Mouwen, director, internet and mobile, ING Netherlands.

• Abu Dhabi Commercial Bank—“Security is only a small part of the whole process,” says Anil Kumar, regional director for the bank. “The primary issue is that 91% of the people are dissatisfied with current authentication methods and end up typing their passwords wrong. So, customers don’t need to remember their passwords for the rest of their lives.”

• Investec, of the Republic of South Africa—“We are excited to be on the forefront of this game-changing technology,” says Craig West, head of Investec’s Global Client Support Center. “Voice biometrics allows us to offer our clients an unprecedented experience, streamlining the banking process while also offering unsurpassed security.”

An article by Infosys analysts Shivani Aggarwal and Irene Varghese, in October, considers the idea of using voice recognition as “the new banking password.” They generally see this as bringing in “a new era of mobile banking,” citing both its convenience to customers and the effectiveness of properly authenticating them.

However, they also point out various challenges potentially hindering voice biometrics: Bad voice samples; inconsistencies in the speaker’s voice due to sickness or anger; variations that could creep in over time such as old age; and background noise.

Still, they say, “The banking sector is likely to spend at least $750 million on voice biometrics by 2015. With banks moving forward with voice biometric authentication on mobile apps today, it is predicted that by 2016, voice biometrics will be the most used biometric in mobile devices.”

Strong words, but there are indications to support them.

• U.S. Bank has been engaged in a pilot voice biometrics program for more than a year.

“Voice biometrics is a unique identifier that will help us improve the customer experience,” says Dominic Venturo, chief innovation officer for U.S. Bank Payment Services. “Customers are becoming accustomed to using their voice to interact with their smartphones and can become frustrated with entering passwords. Exploring a spoken passphrase login through this technology is a logical next step in our work in biometrics.”

“Exploring,” though, still seems to be a key word—but maybe not for too long.

The payments giant said that it had recently conducted a closed pilot to understand the consumer experience around voice and facial recognition. The beta mobile app it used was tested in an ecommerce environment on more than 14,000 transactions.

“The test group, drawn from MasterCard employees around the world, used both Android and iOS operating systems. The results were very exciting, yielding a successful verification rate of 98%, mixing a combination of voice and facial recognition. The process usually took less than ten seconds,” MasterCard says.

To sum up, then, the Infosys analyst, Aggarwal, has as good a last word as any:

“To gain a cutting competitive edge, banks should step up on the innovation wagon and blend voice biometrics into mbanking apps, since it assures customers of a richer and safer mbanking experience.”

Banking On The Power Of Speech

Three Out Of Four Consumers Plagued With Password Fatigue

More in this category: « What do customers want? Just everything Go jump in Data Lake! »
back to top