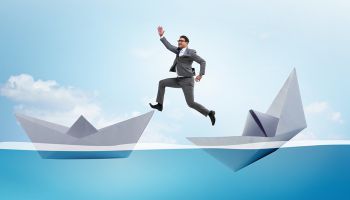 Customers that engage in branchless banking seem to like their mobile bank apps, based on the results of a survey of U.S. mobile bank app users commissioned by S&P Global Market Intelligence.

Among those that have a branchless checking or savings account and believe their bank apps are lacking certain desirable features, only 37% would be interested in switching from their current bank to one that had an app with more features. For all survey respondents, meanwhile, the percentage is 51%.

This would seem to suggest that branchless bank apps are designed well, so much so that they increase customer loyalty.

Another survey question appeared to support this finding. From a list of bank app features, users were allowed to select all the ones that were missing from their current app that they would like to have. For every single feature, the percentage of branchless bank users that wanted the missing feature was lower than the percentage for all survey respondents. There were over a dozen features that users could select, including a smartwatch app and turning a debit/credit card on or off.

A potential limitation of the survey is that the user might have had multiple accounts, using the branchless bank for certain activities and another account for the rest. But even if using multiple banks, these people seem to be satisfied with the suite of app services at their disposal.

Helping to bolster our conclusions, however, was a question regarding how often the user went to a branch in the 30 days prior to completing the survey. As one might expect, those with a branchless account went much less, with roughly 45% indicating they had gone zero times. Of those that did visit a branch, about half only used the ATM. 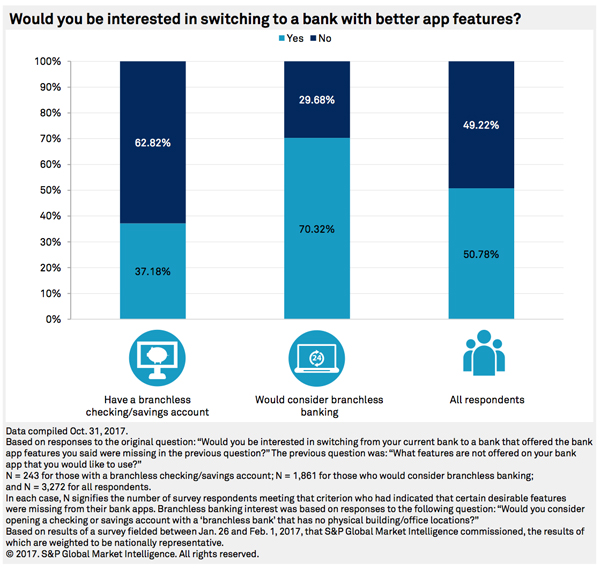 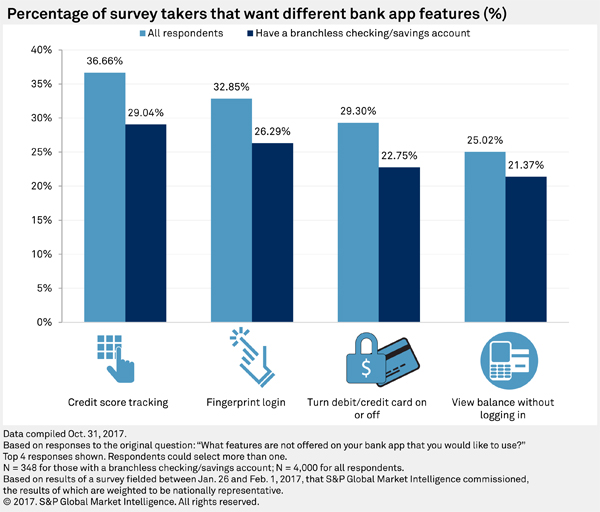 In S&P Global Market Intelligence's survey, known as the Mobile Money Survey, respondents were also asked to list the bank where each person had his or her primary checking account. Bank of America Corp., USAA Federal Savings Bank and Capital One Financial Corp. were some of the banks most cited by branchless account users. But, as stated above, we cannot be sure the bank listed is the only bank the customer used. Capital One 360 ranked the highest in overall satisfaction in the aforementioned J.D. Power study.

JPMorgan Chase & Co. recently offered an example of the effort to capitalize on the popularity of branchless banking. On Oct. 23, Chase announced the launch of Finn, an all-mobile product tailored to millennials. In addition to online banking services, such as fee-free access to Chase and other ATMs, Finn seems akin to budgeting apps like Mint and You Need a Budget. Finn allows the user to set up personal autosave rules and only allows the user to spend what he or she has available. Chase rolled out the service initially to iOS users in St. Louis and plans to expand to additional U.S. cities and Android users in 2018.

But based on the results of our survey, branchless banking is not just for young people. While roughly 21% of those who reported having a branchless checking or savings account were 18 to 35, about 41% were between 48 and 66.

The 2017 Mobile Money survey was fielded between Jan. 26 and Feb. 1 from a random sample of 4,000 U.S. mobile bank app users aged 18 and older. S&P Global Market Intelligence weighted the data to be nationally representative. Results from the survey, which was conducted online, have a margin of error of plus or minus 1.6% at the 95% confidence level based on the sample size of 4,000. 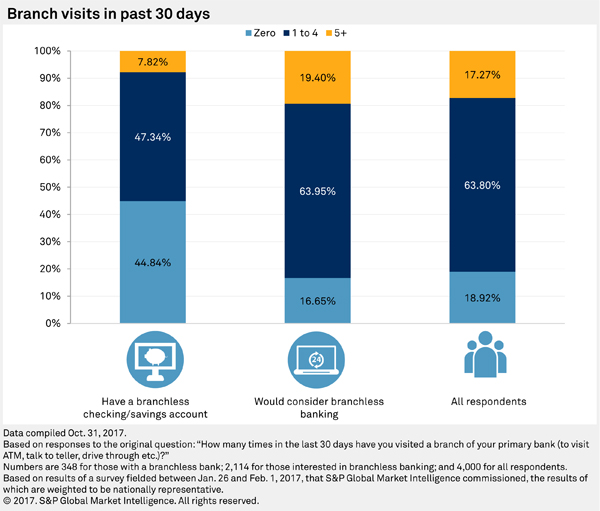