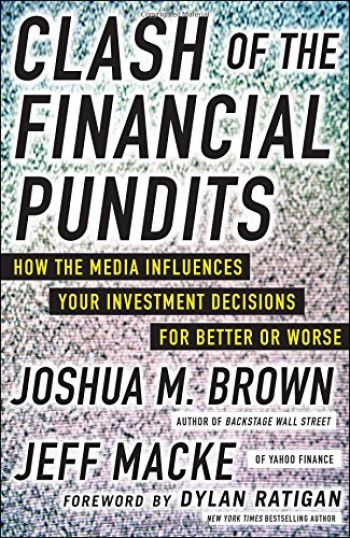 While reading Clash of the Financial Pundits: How the Media Influences your Investment Decisions for Better or Worse, a quote found early in the book kept coming back to me.

Newton said, as he reflected on his personal loss in a highly publicized sure thing:

“I can calculate the motion of heavenly bodies but not the madness of people.”

This book, written by Joshua M. Brown and Jeff Macke—both financial pundits themselves in many respects—works to cut through the glitz and high class communication techniques to illuminate the work of financial pundits for good and bad.

The authors do this in a style befitting this book on the influence of many words. Interviews are shown with the country’s leading pundits, including Jim Cramer, Ben Stein, Karen Finerman, Henry Blodget, Herb Greenberg and Barry Ritholtz. Each interview differs markedly in content and focus.

Between the interviews, the authors provide additional insight and prospective on the background and success and/or failure of those interviewed and other personalities who are regularly projecting a view point and opinion.

Apparently there is money to be made by being a pundit.

More amazingly, in that light, it turns out that success does not mean one has to be right all the time.

It seems that rather than hitting 100%, one can do well as long as communication skills are appropriate, a strategically correct prediction has at some time been made … and if the camera is in one’s corner.

My banking duties include the buying and selling of securities for our clients in wealth management. I confess to have watched and read many shows and articles in which the so-called experts are pontificating with confidence and knowledge to persuade me to continue to watch and read.

Indeed, one such pundit actually has said that their job is not necessarily to be correct, but simply to fill the time between commercials.  I am sure being informative and correct are bonuses.

But apparently human nature is not necessarily tuned to only receive facts and ideas. We appear ready to be entertained, even when it comes to our money and other assets.

I really appreciated the candor those being interviewed portrayed.  They do not all take themselves so seriously. Some are at times very interested in warning their audience of bad information rather than always trying to hit the home run with their own predication.

The crown of glory goes of course to the pundit who is consistently able to predict the crashes like in 2008, the tech bubble in the late 1990s, and the most recent housing bubble.

If they can keep their audience, there are newsletters and books to sell. And there is the opportunity to become one of the most sought-after personalities on shows like CNBC, Fox Business, or other business networks.

Heeding the sage who preaches our belief

If you consult the dictionary, you’ll find that “pundit” derives from an Indian dialect root, which translates to “wisdom.” But sometimes “wisdom” is in the eye of the beholder, and having a huge following does not necessarily mean that a pundit is necessarily brilliant.

Not all of the blame of the success such not-so-helpful pundits is their fault.  Often, the audience wants to have their opinion confirmed. If a viewer see that someone is on the same wavelength they are—as they have already placed their investment—that viewer is going to appreciate the pundit.

If the pundit’s opinion is opposite of one’s recently placed investments, the pundit will probably be rejected for being out of touch.

We all want to be told we are making good decisions. A marketing pundit once said that half the rationale for car advertisements was to keep people who had already bought the model convinced that they had made a smart or trendy choice—in order to stimulate good word of mouth from these owners.

What the pundits think of us

There is interesting reading here of pundits’ views of their audience or clients, but turnabout is fair play.

The anonymity of the internet—you can tear someone to shreds while hiding behind a pseudonym—can embolden many commentators to be extremely harsh and critical, which appears to also be a part of human nature.

Perhaps the matter is that if some folks cannot be as successful as the pundit appears, then the belittlement of their opinion by immature viewers provides some strange compensation.

Pundits interviewed spoke of such comments that are often received over the internet, but which never come in face-to-face meetings.

Some guidance to choosing pundits

Some of the high points for me in the book were the interview with Ben Stein and Jim Cramer and the final chapters. One study quoted indicated that of thousands of predications made, the “experts turned out to be correct in their calls about 33% of the time.”

We all know it is impossible to consistently predict the future. Yet, as we go in search of information, we hope to find that person or service who has accomplished the impossible.

One of the takeaways of Clash Of The Financial Pundits lies in an approach to weighing pundits’ advice. The final chapter of the book contains some excellent questions for seekers of knowledge to ask themselves regarding the so-called expert they are considering following.

A few of the questions:

1. Who is the expert? And what firm or organization does the pundit represent?

2. What does the pundit’s professional affiliation mean in terms of the opinions being shared?

3. What are consequences for the pundit who is wrong? Will we ever hear more about this idea in a follow-up?

4. How does the pundit’s opinion I’ve just heard relate to my own portfolio or investing goals? Is there any real relevance?

There are more points to review that are worth the time. This was an enjoyable book and one I recommend if you are looking for answers on the market. The honesty that is evidenced in the interviews is refreshing.

I must admit, the book also changed my outlook on this matter.

In the future, I will look at these pundits with much more skepticism, and more for entertainment. I know there are many good voices out there and this book will help find them.

I think the authors’ best advice is to first check out our own motives before seeking advice.

More in this category: « Elizabeth Warren, from the inside out From competitors to partners »
back to top