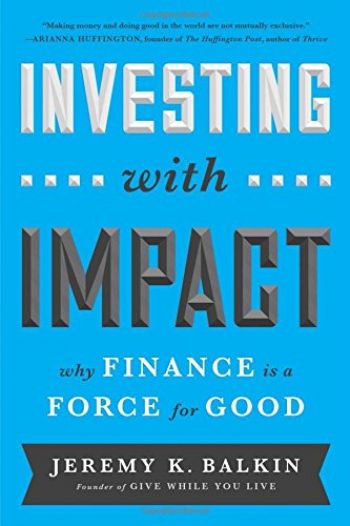 Investing With Impact: Why Finance Is A Force For Good. By Jeremy Balkin. Bibliomotion, 240 pp.

The financial crisis in 2008 affected virtually all parts of the world’s economy and has now become a reference point and a key example of what no one wants to ever experience again.

The Great Recession is a ride best ridden once.

The crisis is mentioned early in Jeremy Balkin’s Investing With Impact: Why Finance Is A Force For Good. This comes in a chapter called “The Blame Game.” Balkin lists the primary players in the historic economic reversal, including some background and a general summary of the errors made by the government and financial institutions.

Balkin states that additional attention needs to be given to the root causes of the crisis, down to personal culpability of the players. He believes “a fundamental change in the culture of banking is still needed, with a greater focus on long-term profitability and investments that intentionally create a positive impact on society.”

I have noticed a great difference in the cultures of private and publicly held banks. Privately held bank indeed focus more on long-term profitability and are not as hard pressed to be sure each calendar quarter shows a noticeable positive change from the previous one.

But the author is looking for more than just a shift in attitude toward long-range earnings results. Long-term and drastic changes in attitude and financial focus is needed, in his view.

Balkin quotes the Pope’s observation that capitalism has been perverted to the point where those of us in finance in general—and apparently we bankers in particular—have made money our idol.

The author does not concur in such a strong diagnosis of our times, but instead lays the blame at the feet of human morality, which needs to be fixed.

Where do millennials fit in?

Millennials are discussed as a possible cause for concern, with statistics relating to their employment and marriage percentages presented. Both statistics are low in comparison to previous generations, and the possible effect of this age group’s cultural change on the financial world is explored. Matters that have affected the millennials or will be changed by them are addressed and are interesting to consider.

As a Baby Boomer, I am fascinated about the large number of issues that are given to this younger generation as either the cause or the cure of the world’s problems.

However, in Investing With Impact Balkin sees millennials as the source of a solution, which brings in the process of investing with impact.

Impact investing “is an investment approach that seeks to achieve measurable results beyond purely financial returns. In other words, the value of an investment may include nonfinancial metrics,” Balkin writes.

Apparently the impact market is currently a noticeable faction of the overall market, as it is estimated to be between $25 and $40 billion. This is still much smaller than the familiar trading markets, but the author believes there is great potential and profit for those who want to focus on these characteristics.

The use of a “social impact bond” is outlined, a term that was new to me.

This type of bond is based “on a commitment from government to use a proportion of the savings that result from improved social outcomes to reward nongovernment investors that fund” the target societal needs, such as improving education levels of minority elementary school student.

Balkin expects impact investing to create the needed cultural change in the financial world. The transformation is to be accomplished with his 6E Paradigm Impact Investing Approach.

This approach, he says,  is “an investment framework that increases both transparency and objectivity while elevating investor confidence in the marketplace and reflecting the true impact of an investment.”

The six Es in this process are Economics, Employment, Empowerment, Education, Ethics, and Environments.

Each of the Es is described, as are how the points will combine for a clearer sense of the investment and how it will affect the culture. As a case study, Balkin uses Starbucks, which comes through with a six-star rating.

This process brings up some concerns. An inability to be able to review all the factors in the 6E process in publicly traded companies is the primary problem. Once the necessary information for impact investing is readily available, the financial culture will change, according to the author.

Looking beyond our country

One of the final chapters discusses the lack of availability of real financial services in many parts of the world.

I found this to be an interesting narrative as it did address the need for and the growing use of microfinance for those lacking access to mainstream banking services in these unbanked areas.

I do not fully agree that banking services are a human right, especially given the risk of capital that bank stockholders may have in jeopardy in today’s world of civil war and terrorism.

Perhaps the achievement of this new standard of investment rests with the millennials. We shall see.

More in this category: « Keep calm (and don’t be the one carrying on) Should everyone have a “pension”? »
back to top