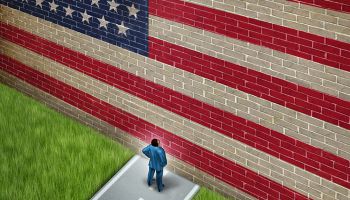 Since that July 14 earnings call, other bankers have reported soft loan growth and anecdotes of commercial clients wary of taking on debt. Across the banking industry, total loans are still growing but the pace has slowed. Among banks that had reported quarterly results as of July 26, the median year-over-year increase in loans was 9.5%, down from 10.9% in the first quarter.

"The issue is clearly Washington gridlock. If you look at what's transpired in the last three months, things have only gotten worse," said Peter Winter, an analyst with Wedbush Securities.

Trending down among big banks

While some banks reported strong lending numbers, that appears to be a case of taking market share rather than an indicator of a growing economy, said Brian Klock, an analyst with Keefe Bruyette & Woods. 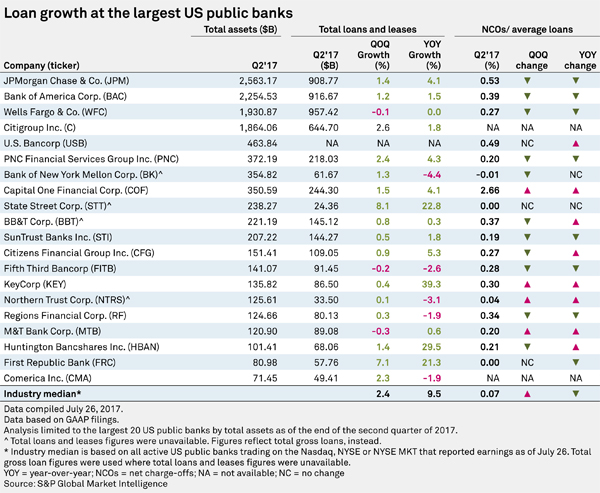 Republicans prioritized healthcare but have failed to make meaningful progress. Considering that healthcare is often one of the largest expenses for a small business, uncertainty over future costs have made some borrowers more hesitant. Similarly, a lack of clarity over tax reform and the treatment of large capital expenditures have put business expansion plans on hold.

"It feels like the guys that may have had better [commercial and industrial] loan growth this quarter are just taking share from others. The pie isn't growing big enough," Klock said. In addition to poor C&I loan growth, some banks have pulled back from commercial real estate over concerns that the sector could be headed for a downturn. Regulators have been advocating caution in the industry since December 2015.

"Our customers continue to be very cautious, and especially in the way they invest and for the time that they invest. In other words, they may invest what they need for a year to meet demand, but they're not going out as far as they used to go," said Comerica Inc. Chairman and CEO Ralph Babb Jr. Comerica was one of five big banks to report a year-over-year decrease in total loans and leases.

The clock is ticking. Klock said commercial borrowers typically start the budget planning process in the third quarter or early fourth quarter. For a company weighing a major capital expenditure that might be affected by tax reform, the decision could be delayed beyond 2018 if there is little sign of action in the current congressional session.

Donald McCree, head of commercial banking for Citizens Financial Group Inc., said many borrowers who began the year bullish based on their expectations for the administration are now in "wait-and-see mode."

Bankers and analysts have reported that some businesses are relying on cash instead of requesting additional credit, so political uncertainty is also contributing to shrinking bank deposits. Klock said weak credit line utilization was a top question on commercial customer surveys issued by M&T Bank Corp., Fifth Third, and SunTrust Banks Inc.

"The three most-often highlighted reasons why they were not drawing more on their lines were: uncertainty on regulation coming out of Washington, D.C.; uncertainty on healthcare costs; and then tax reform," Klock said.

There’s real strength out there

At the same time, macroeconomic fundamentals remain strong. Banks have reported healthy pipelines, offering hope for stronger loan growth in the second half of the year. And analysts said it appears the commercial borrowers' balance sheets are healthy and banks are ready to lend.

Klock takes some comfort in the ISM Manufacturing Index, which showed greater economic activity in June and typically precedes loan growth by six months. And Wedbush Securities' Winter said certain manufacturers have equipment that is becoming obsolete and will need replacing irrespective of congressional gridlock.

"I think it will improve in the second half, but it won't be anything robust," Winter said. 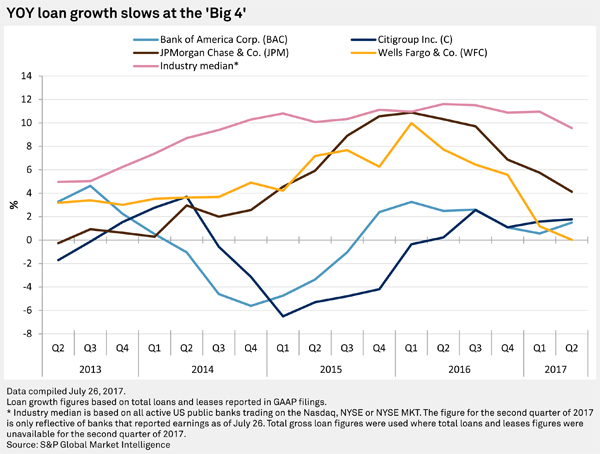