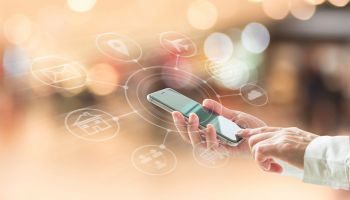 It has been over a decade since the smartphone made the Internet not only more portable, but far easier to use. Only tech zealots are likely to recall how early adopters once clamored for Apple to stop teasing them and get on with releasing its long-rumored iPhone. Steve Jobs resisted the pressure, took the time to ensure Apple had a first-generation product with a wow factor, and the rest is history.

Since then, Internet connected devices, most of them portable, have proliferated and will continue to do so. According to a Visa/ PYMNTS.com survey, nearly one-quarter of American smartphone users already have at least six digital devices, and more than three-quarters use some sort of connected wearable or voice-activated device in addition to a smartphone. This trend will surely foster new ways to pay for goods and services better aligned with customers’ “anytime, anywhere” expectations.

Payments have already moved out of our wallets and physical stores, supplanted by new payment models leveraging an increasing number of applications that feed directly into the payments infrastructure. U.S. e-commerce spending is on pace to exceed $1 trillion, nearly one-fifth of overall U.S. retail, by 2023. Meanwhile, according to TREND ONE and Statista, payments initiated on mobile devices will grow at a compounded annual growth rate of more than 60 percent, reaching nearly $275 billion by 2021.

It is no secret that fintechs have played a major role in driving these trends, providing financial services applications designed to optimize the level of convenience that consumers crave most.  And while investments in the fintech space continue to grow, often lost in this discussion is the fact that many of the early fintech entrants have now reached grown-up status. The ongoing success of these incumbent fintechs and the fertile ground that continues to give rise to new ones fuels an ongoing debate about what impact these organizations have had and will have on the financial services landscape long term.

It should be obvious by now that almost none of the fintechs aspire to become banks. This view of their role always has served as a useful “red herring” to their real end game: the disruption of the role of financial institutions in those areas of their relationship with consumers that are most lucrative. Examples of this are ripe in areas such as lending where fintechs have been very adept at stripping away the friction associated with approving loans for consumers and businesses.

If this type of disruption is multiplied across other profitable products and services provided by financial institutions, it takes little imagination to see that this type of innovation can – if it continues unabated – reduce banks and credit unions to commodities, leaving for them the basic role of being a glorified accounting system for the consumers they serve. Further, the idea that consumer concerns about security might give them pause when considering a fintech application that is easier to use is not supported by their behavior.

Addressing this threat from fintechs is a non-trivial task for financial institutions due to a combination of cultural and systems-oriented roadblocks. Specifically, bankers whose mindsets tend to think of the consumer as requiring their services now must be transformed to that of a retailer. This shift in perspective is proving very difficult.

As for the technology roadblocks, there are technologies that, once implemented, can equip financial services organizations with a competitive advantage in addressing these customer demands. Yet, the leadership at many financial institutions harbor the erroneous belief that these new technologies are too expensive and too complex for their consideration, which is wrong on both counts.

Meanwhile, fintech firms and their investors continue to exploit the low hanging fruit in both the business and consumer banking space, usually targeting wherever a poor service experience exists. In this sense, many fintechs have not invented a new way of doing things, but rather improved on existing offerings. They are adept at identifying these “soft spots” and quickly creating solutions that address these weaknesses.

On the other side of the coin, fintechs are ill-equipped to deal with the regulatory and compliance realities facing payments businesses and often lack the distribution network needed to create large scale adoption. Given these realities, there’s a clear opportunity for synergy between these groups.

One of the sticking points to leveraging such a partnership is the question of whose brand will be visible to the customer. Unfortunately, it appears banks and credit unions are too willing to allow their brand to be supplanted by another. Apple Pay provides an example of this tendency with institutions rushing to sign up for an innovation that proved to be at best a C- offering. The latest example, though not reaching the hype levels of Apple Pay, is the Venmo versus Zelle market skirmish.

Recent data shows the bank-owned Zelle rapidly catching up with Venmo, even overtaking it among some demographics despite having ceded a large head start. Lost in this narrative is the troubling fact that even Zelle represents a branding inserted in front of the bank’s identity as the market’s face to the customer. This co-opting of brand positioning does not bother banks nearly enough and, each time it occurs, financial institutions take another step closer to commoditization.

Voice-activated interfaces, virtual shopping and connected devices are creating an environment that will shape the future of commerce in ways we cannot yet fully anticipate. Consumers and small businesses’ need for transactional services will increase in this environment as will the need for the infrastructure to process and clear those payments efficiently and effectively.

Though financial institutions may decry the regulatory burden they must shoulder in providing these services, this responsibility is a valuable bargaining chip in the battle for the customer. Leveraging this aspect of their role to continue to be the trusted advisor to consumers and businesses will mean offering fintechs lucrative enough terms to make their role as suppliers of innovation attractive even if their brands are in the background.

This is no time to be frugal or begrudge those that are changing how financial services are delivered. To do so may only accelerate the downward spiral toward becoming a “utility,” meaning the provider of non-distinguishable services consumers expect to always be available at as cheap a rate as possible.