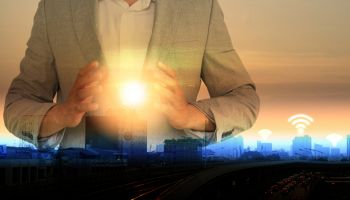 The technological forces of disruption in banking are by now well documented. The U.S. financial services industry may not yet be feeling the effects of dozens of tiny fintechs latching onto traditional banks and garnering a million customers who do their banking purely on their mobile phone—as is happening in Europe and the U.K. as well as most of Africa. But already looming large are the disruptive threats from their counterparts, techfins, the huge technology companies beginning to offer banking services to a public that is ready to trust them as much as or possibly more than their legacy “bank.”

These emerging forces might have sufficient potential to influence the industry landscape to threaten the existing business model of established banks.

Both small fintechs and giant techfins have forged new ways of doing business that depend on a partnership with older, larger, well-capitalized banks. This currently allows new entrants to establish their independent brands. As they form partnerships; adopt new, transparent, customer-first mindsets; more fully leverage AI and robotics; and begin implementing distributed ledger technology, disruption will likely accelerate from these and other initiatives. These trends, taken together, have the potential to be seismic. Ultimately, the role of an “established bank” may be transformed.

Staying competitive in this environment may require not only a new model of business but a new model for leadership, one that can drive the continuous design and deployment of new standards for accepting funds and creating credit. Such a new leadership model emerged from a research project by Deloitte that surveyed Fortune 250 CEOs across multiple industries. The goal was to answer one critical question: What does it take for CEOs and their organizational leaders incumbent players to be “undisruptable”?

Those CEOs who envisioned being able to prosper through ceaseless disruption defined a set of five attributes required not only to defend against disruption but to emerge as disruptors in their own right.

First, and above all, CEOs need to continually transform their organizations by “embracing ambidexterity” through their leadership—and by infusing others with the same mindset. Ambidexterity requires simultaneously exercising the two “hands” of optimizing through aggressive actions that yield efficiencies while exploring new and risky pathways that may ultimately modify the current business model. Enhancing optimization and exploration simultaneously, particularly in large, legacy financial institutions, can be extraordinarily challenging—yet doable. The larger, more complex, and older an organization, the more it may lean on optimization over risk-taking exploration as a means to growth and profitability.

To gain comfort in taking risks and learning from the inevitable failures that come with them, leaders need to “cultivate emotional fortitude,” which provides a clear-headed expectation of possible failure but does not result in despondency or recklessness. Emotional fortitude combines a realistic assessment of potential risks and roadblocks with the courage to pursue lofty visions. It involves the tenacious confidence to continue exploring risky bets in the face of repeated failures and the willingness to let go of a treasured project as soon as the “signs” that justify abandonment arise.

To supply a powerful engine to exploration, CEOs voiced the need to “adopt a beginner’s mindset,” a concept rooted in Zen Buddhism, that leverages the possibilities inherent in not knowing all the answers. Strengthening one’s ability to find moments to keep an exceptionally open mind, put aside all of the answers and knowledge one has gleaned over the years, and listen deeply to differing views and experiences, can lead to breakthrough ideas that may further “bend” the business model.

As a complement to the creativity of the “beginner’s mindset,” CEOs also articulated the attribute of “mastering disruptive jujitsu.” This characteristic requires recognizing threatening, disruptive patterns from competitors and others in the environment, breaking the patterns into their components, and ultimately finding ways to appropriate selected disruptive elements for their competitive advantage.

The fifth and final attribute, “becoming the ultimate end-user ethnographer,” brings the focus right back to where every business journey starts—the customer. Leaders who aspire to be undisruptable make it their passion to discover their customers’ most subtle, unconscious, and often unrecognized needs and desires. Essentially, what will solve the problems that customers have not yet even acknowledged to themselves? It requires finding new and innovative ways to understand the customer’s experience with your services—and then addressing their most deeply-embedded wishes and needs in innovative ways (as fintechs and techfins have started to do), regardless of whether the consumer is conscious of them or not.

To become undisruptable, CEOs will need to constantly reinvent their work, demanding new perspectives from themselves and their organizations. In striving to create a new leadership model, some failure is inevitable along the way; but without it, banks, as we know them, may not survive the threat.