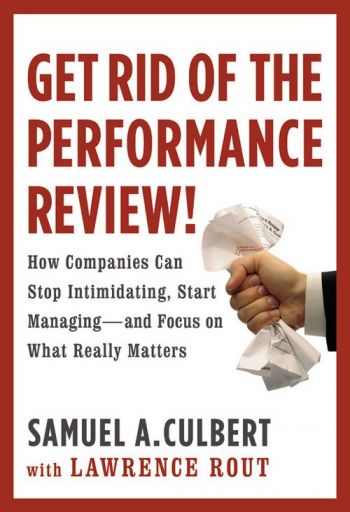 Get Rid of the Performance Review! How Companies Can Stop Intimidating, Start Managing--and Focusing on What Really Matters. By Samuel A. Culbert with Lawrence Rout. Hachette Book Group, 2010, 256 pp.

Virtually every bank has a performance review process in place. And very few can say it’s totally effective in achieving its goals.

Samuel A. Culbert,  professor of human resources and organizational behavior in the business school of UCLA, whose previous books include Beyond Bull**it: Straight Talk at Work and The Invisible War: The Pursuit of Self-Interests at Work, gives a blunt and often humorous assessment of the performance review process. Culbert claims abolishing the process altogether would create less damage than perpetuating this ubiquitous management technique.

Fortunately, the book offers more than an extended rant. Culbert offers alternatives to the performance review and justifies why new methods can better meet the challenges of today’s organization.
Replacing an accepted corporate ritual
When a practice becomes as entrenched as performance reviews, you have to take them on methodically. The book is divided into five parts.

The first part explains how the typical, stereotypical performance review works. Culbert parodies the mindless maliciousness of the performance process with hypothetical re-enactments. Many banker readers will recognize these scenarios, having been the practitioners or prey, or even both.

The second part, ranging over three chapters, describes in detail the many flaws of the current process. These include the need to: allocate economic benefits in something more than a random way; protect the employer from potential employee litigation; and, most important, confronting the political dynamics which influence a candid assessment.

These flaws often take shape in the actions of artificially ranking people in a bell-shaped curved. In such a forced ranking, the top 20% are the “stars”; the middle 70% are the necessary “adequate”;  and the bottom 10% are encouraged to leave--a process known as “rank and yank.”

Indeed, it emerges that much of the process of the performance review is documentation for having reasons to terminate people.

What about the popular 360 degree feedback review? Proponents of that say the feedback is objective because it comes from a variety of sources. Culbert indicates that it can be anonymous hate mail.
So, what do we use instead? The “performance preview”
Having knocked down the accepted and the trendy, Culbert doesn’t leave the reader out on an HR limb.

The third part of the book presents Culbert’s solution: the  “performance preview.”

This is not just a retreaded performance review with a tricky name.

It’s a way to help employees obtain the resources needed to get their jobs done and remove barriers to accomplishment.

The performance preview begins with recognizing employees not as costs to be minimized, but resources to be managed.

Culbert sums up the difference between the two methods this way:

Culbert spends a great deal of time describing and justifying the use of the preview. As he envisions it, the performance preview attempts to join the boss and subordinate in a linked commitment to achieve corporate goals. Using techniques advocated by Dr. Peter F. Drucker, a founder of management thought, the employee gives an assessment of the three or four things which would make he or she wholly effective, and the three of four things which impede effectiveness.
Addressing the entrenched skeptic
Culbert is no stranger to corporate thinking and knows that bringing about a major change in approach takes persuasion.

The author acknowledges there are many good and decent people using the appraisal review tool at their disposal in ways which have many unintended consequences and often does not improve an unsatisfactory situation.

Part four addresses the lingering doubts and anxieties about implementing the performance preview technique. The author does a nice job selling his solution.

Assuming that by now he’s made a convert of the reader, Culbert devotes the fifth part to a call to action, and to do the right thing.

Here Culbert attempts to inspire those with the ability to make a change to do so. His self-stated goal is “making the world of work fit for human consumption.” Being good and decent people, many managers wish the game was played differently--as suggested by Culbert in his book. Old habits are hard to break and it’s a naturally tendency to do something wrong and familiar rather than new and untried. Culbert makes his case for venturing onto new ground.
Can this be made to work?
There is no universal management tool that works in every organization. Culbert’s performance preview aims to remove the dramatic performances, charades, and gamesmanship of boss and subordinate relations, to produce a focus instead on achievement and results.

Former General Electric CEO Jack Welch once asked a question of leading CEOs attending a conference where he was speaking: “How many of you can say your personnel or HR function has equal standing to your CFO?”

Only a few people raised their hands.

Then Welch asked:  “How can you have the best team on the field when you give higher status to the bean counters and ticket takers rather than to the Joe Torres of your organization?”

Culbert’s book may help your bank line up its practices with its beliefs.

Reading the book reminds me of a story of a very old school banker I knew of. His financial performance consistently placed his institution as one of the top performers in its peer group.

The banker was asked about appraisal systems in his bank.

“I don’t think we have one,” he said. “I can’t imagine a coach waiting until the end of the game or half time to help a player achieve, so I guess we our perform our appraisal review process every day. I give feedback and coaching whenever I see things that I need to comment on.”

He and his family sold the bank for a handsome multiple 15 years ago.

To read the first chapter of this book for free, visit the authors’ book page.
If you'd like to review books for our online book column, or have recently read a book that you found helpful that we haven't already reviewed, please e-mail [email protected]