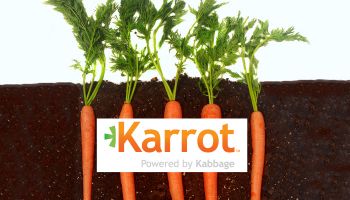 Kathryn Petralia and her Kabbage teammates have expanded their online “garden” with Karrot, an automated consumer lending service built on the same online lending engine that enables the Kabbage small business lending service. Karrot promises loans potentially “in minutes,” plus online delivery of funds to consumers’ accounts by the next day.

Kabbage, subject of “Kabbage looking to expand patch” last February, launched in mid-2011 as an online source of funding for online retailers. It has steadily expanded the scope of its operations. Today Kabbage says it has funded over $400 million in small business credit needs—double the volume as of the earlier article. Kabbage provides lines of credit from $500 to $100,000.  Borrowers can even access Kabbage via mobile devices using an app.

Karrot Personal Loans, by contrast to Kabbage business loans, are not lines of credit, at least at this time. The service, which had a soft launch in September but which has not been marketed extensively yet, currently offers unsecured personal installment loans of up to $35,000 for terms of 36 or 60 months.

Karrot loans come at fixed rates that are risk-priced, and they can be obtained at rates as low as 6.44% APR. Funding comes from institutional investors, with the loans being made initially by Celtic Bank, a Utah industrial bank.

Petralia, co-founder of Kabbage, says that applicants are asked the purpose of the loans, but that this is for the company’s research purposes and does not affect the loan decision or structure.

On its website Karrot promotes the loans for everything from an alternative to traditional auto loans to covering medical expenses of a pet.

Regarding that, the reader-friendly site states: “We understand that Spike is your furbaby, and he sometimes swallows socks. Get a Karrot loan for those unexpected vet bills.”

At this time, one borrower can obtain one loan through the automated platform. Petralia says requests for additional credit could be considered, but that would require human interaction.

By far, Petralia says, borrowers report using the loans to enable debt consolidation. Many also are using the service for home improvement credit. Petralia sees this as a substitute for home equity credit, which has become less available in many areas.

Petralia says the service aims for prime customers—FICO mid-600s and up—at this time, and she believes one advantage, beyond speed, compared to bank lending is that Karrot will make smaller loans than some banks will.

“The biggest reason to use Karrot is speed,” says Petralia. “Our process is completely automated.” But availability is also important, she explains. Credit cards have become harder to get, taking away the option of cash advances and large credit card purchases from some segments. She sees online lenders like Karrot as filling the gap.

Regarding that, Petralia says that she sees this product as a strong competitor to the online Prosper and Lending Club. Prosper’s website states that over $1.6 billion in loans have been made, currently at a best rate of 6.75% APR. Lending Club has made over $5 billion in loans; the site does not make a statement concerning specific rates.

“There’s a big market out there,” says Petralia.