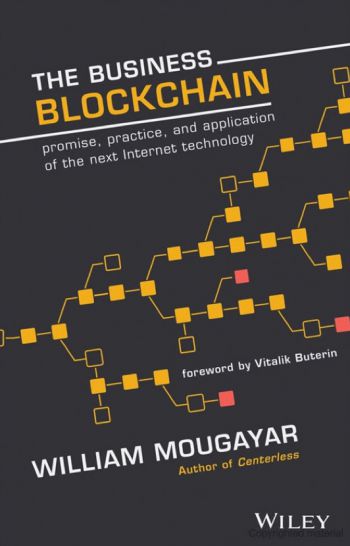 The Business Blockchain: Promise, Practice, And Application Of The Next Internet Technology. By William Mougayar. Wiley. 180 pp.

“I went through great pains trying to understand the many facets of the blockchain. Many of its smart visionaries were technically inclined people who didn’t focus on succinctly explaining its business implications, or intersections. My early quest to understand the blockchain required a lot of teeth pulling and tea leaves reading to connect the dots and find clarity. It was an agonizing encounter, and the source of my impetus for writing this book. I was determined to make it less dreadful for the rest of us to understand this technology and its ramifications.”

Author William Mougayar’s painful quest succeeds in The Business Blockchain. He does make the basics of blockchain technology understandable to the layman, giving the reader an understanding of where the blockchain came from; how it functions; how it relates to the internet; and how it may come to replace many aspects of financial services as we know them today.

Clearly Mougayar, a venture capitalist, author, and tech blogger, became a convert in his journey to understand and interpret the blockchain to the rest of us. Whether he will ultimately prove to be right remains to be seen. Mougayar tempers his interest and enthusiasm with the message that as fast as experimentation and talk about adoption of the blockchain in financial services and elsewhere occurs, what we are seeing now is still “early days.” That’s a relative term when even young bankers have seen the way they conduct business evolve at sometimes dizzying speed.

Making sense of the blockchain

The Business Blockchain, beyond serving as a primer for those who want to sort out blockchain possibilities from blockchain hype, will serve as a touchstone of sorts for bankers who want to periodically regain their bearings as the blockchain evolves. For some, dipping back into the book from time to time will be helpful as a sort of true north.

My Banking Exchange colleague John Ginovsky calls his tech blog “Making Sense Of It All” reflecting the blizzard of news, quasi news, and pure hype about tech that can be blinding. The Business Blockchain takes much the same approach, though with enough optimism for the future and hope for the blockchain’s potential to take it far beyond a long screed on Wikipedia.

The Business Blockchain is a detailed examination, with a pro-blockchain view underlying it. Bankers should not approach the book expecting an easy read. That’s not the nature of the blockchain beast, unless you are of a technical mind. The book is highly readable, but the concepts dealt with take some concentration to wrap the mind around. And that’s especially the case when the reader is a banker who has a certain view of how the financial world works.

A key element of this lies in the concept of centralization. Bankers live in a world where payments of all forms fundamentally require centralized clearing and settlement.

As Mougayar makes clear, the blockchain in many ways stands for decentralization, a concept that banker DNA will resist a bit. Reading the book, I found myself occasionally getting twitchy, after 37 years of covering banking, and I’ve never been so much as a teller, let alone a banking executive. (But I once invested in CompuServe, because I didn’t see that the World Wide Web would last.)

Another element about the blockchain that bankers will find difficult at first to come to terms with is its “trust layer.” Banking has been all about trust, going back to its roots. Much of that trust is based on personal and institutional relationships and structures. But the blockchain relies on its very nature and design to create trust.

To a degree, this is like trying to convince a sheepdog that its no longer necessary to round up the sheep, that they will sort themselves out on their own as necessary.

Mougayar makes everything quite clear, going into sufficient depth to help readers see inside the “black box” of blockchain technology to a certain degree. The Business Blockchain goes beyond merely popularizing the technology. The patient reader will find the book a good lens for evaluating news and developments regarding the blockchain over the next few years.

Building blocks of the blockchain

In explaining the basics, Mougayar literally begins at the beginning, which in this case is a paper, published in 2008 under the pseudonym Satoshi Nakamato. That paper—which is not the easiest of reads for the non-technical—is summarized by Mougayar and then boiled down further into several key points:

• Cryptographic proof instead of central trust

• Trust in the network instead of in a central institution

The term “disruptor” has been used to the point of cliché, but if only a part of the projected future of blockchain technology is realized, in the words of that old singer Al Jolson, “Folks, you ain’t seen nothing yet.”

Mougayar goes beyond the “gee whiz” aspects, however, to dig into the guts of how the blockchain works. Along the way, he broadens concepts that often get truncated in daily financial services coverage. For example, “blockchain” and “distributed ledger” often are used synonymously. Mougayar dissects things to make them clear:

“If there is one main point that I will keep drilling upon, it is to emphasize that the blockchain is not one item, thing, trend, or feature. It is many pieces all at once, some of them working together, and others independently.”

This list sets up extensive discussions in other parts of the book for practical application of blockchain concepts, and the beginning of how to understand and deal with the implications of the technology.

Where will this leave banks?

All this will make bankers nervous. While much about financial services comes up throughout the book, Mougayar devotes his fourth chapter completely to the blockchain in financial services, and he chalks out the lines in his first paragraph:

“Financial services institutions will be challenged by how much they are willing to bend their business models to accommodate the weight of the blockchain. Their default position will be to only slightly open the door, expecting to let as many benefits seep in, with the least amount of opening. The challengers (mostly startups) will try to kick that door open as much as possible, expecting to throw the incumbents off balance.”

Mougayar doesn’t bring the frequent disruptor attitude to this discussion. He doesn’t ignore the possibility that the blockchain could radically reformulate what we know as banking. He does, generally, paint the banking industry as a whole as being behind the times and isn’t going to bet the rent on banks catching up.

“Those who do not learn from history are condemned to repeat it,” Mougayar writes. “If banks do not adapt more radically than they did with the Internet, they will suffer the consequences. If FinTech was about challenging banks’ payments systems, blockchain promises to not only continue to unbundle the banks, but seems intent on disrupting a whole gamut of traditional inter-institutional processes, from cross border to clearinghouses.”

Mougayar portrays the future as a dual path. On one road, blockchain startups will attempt to devour banks’ lunch, the latest act in a long history of would-be lunch-eaters. On another, the blockchain will reinvent many bank processes.

“If you are an optimist,” writes Mougayar, “there is a third outcome. Banks and the entire financial services industry might decide to seriously reinvent themselves. In that difficult to achieve scenario, there will be winners and losers, and parts of the overall segment would shrink—but it might emerge stronger in the long term.”

While this third road seems most hopeful, Mougayar holds out the warning that banks risk winding up as little more than the financial equivalent of a state turnpike authority. They will run the roads, and may put toll booths on the on-ramps and off-ramps, but they won’t necessarily be doing the key tasks.

“They will not be centers of your wallet,” Mougayar writes.

He later adds, “We would be asking a lot if we asked financial services institutions to fully embrace the blockchain. In reality, what they will do initially is to pick and choose what they like and disregard what they do not like about it.”

If anything, financial regulators will have an even tougher time making the adjustment. Mougayar portrays a future where, at the extreme, regulators will be blowing their whistles and throwing penalty flags—but all the important players will be on another playing field altogether. For an industry that has learned how to navigate regulatory barriers, rather than avoiding them completely, this is a very different perspective.

“Radical innovation can be a competitive advantage,” writes Mougayar, “but only if it is seen that way. Otherwise, innovation will be dialed down to fit [banks’] own reality, which is typically painted in restrictive colors.”

This is just an overview of the direction banking may take in the potential blockchain age. Mougayar presents a section of strategic questions, with discussion, that may help bankers begin to come to terms with the blockchain.

An entire chapter is devoted to implementing blockchain technology, and bankers should find that helpful. Mougayar has worked in corporate environments and has appreciation for the challenges of evolution. Part of this chapter consists of 12 features of a blockchain platform, which begin to put an operational face on the theory.

While this chapter is aimed are large organizations, all bankers with some interest in fintech and in the future of money will benefit from reading it. It could stimulate discussion in strategic planning meetings or board retreats, for example. Mougayar recommends appointment of a “blockchain czar” for organizations that intend to move into this area. For the smaller bank, appointing someone to track developments and report to the bank’s players would be a start.

“If ain’t broke, don’t fix it” is an adage with some common sense, but banks don’t enjoy the luxury of ignoring change. The potential evolution of the blockchain in some way resembles social media. Many banks have not embraced it, though more and more have. What they have not been able to do is exist apart from it.

There is plenty about the blockchain that will give bankers heartburn, but they must know that true believers in the blockchain like Mougayar will not let that impede them.

“Blockchains are more than business-technology enablers,” writes Mougayar in his epilogue. “They are instruments of social and political change. If we miss their higher calling, we would be falling short of realizing their fullest potential.”

Additional insights from The Business Blockchain can be found in “Blockchain: What you need to know”

More in this category: « Fresh look at bank performance, with green twist Avoiding damage by disruption »
back to top