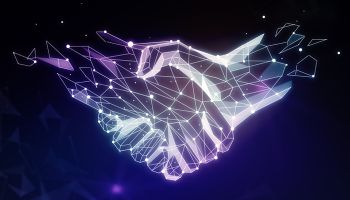 Deals may still seal with a handshake, but what happens next follows an evolving model.

As customers, competition, and regulations intensify with every new technological advancement, banks and fintechs must reinvent their relationships with each other.

This will involve entirely new approaches to regulatory development and vendor-bank agreements. In many organizations, basic cultural changes from top management on down will also prove necessary.

These were among the observations of a panel consisting of a bank chief innovation officer and a cofounder of a fairly large fintech consulting firm. They spoke during the recent ABA Payments Forum in Washington, D.C.

While nominally focused on the rapidly changing payments technology environment, this panel took a more philosophical, big picture look at the changing relationships between banks and fintechs in general.

Speakers recognized the oft-stated observation that, on the one hand, bankers have customers and regulatory compliance expertise, yet are constrained by fiduciary responsibilities. On the other, fintechs, and particularly startups, have the bright, innovative ideas and the energy to pursue iterative approaches—being open to failing, adjusting, and retrying until an optimal solution is found.

It’s the middle ground that still has to evolve—and quickly.

How will bank supervision evolve?

“The world is changing,” said Jason Henrichs, cofounder, FinTech Forge, which bills itself as a company that bridges the innovation gap for financial institutions seeking change. “I think the regulators realize now that a backwards-looking view is really difficult to continue to deploy when you’re doing new things.”

Henrichs observed that, in general, regulation has three components: intent; people and processes; and outcome.

“Historically it’s really hard to measure intent,” he said. “The purpose of bureaucracy is to take that kind of personal judgment out. Outcomes, in the old world, took a long time to develop and were hard to measure. So we put all of our energy into auditing the people and processes, the middle part. Well, that doesn’t work so well when the world is changing at a faster and faster rate.”

Instead, Henrichs said, regulations should concentrate on intent and outcomes. “Let’s look at what’s actually the intent of what we’re going to go do with this and how are we going to measure the outcome of that.”

Dominic Venturo, executive vice-president and chief innovation officer, U.S. Bank, pointed out that services and channels are developing now that no one yet knows how to regulate.

Smart contracts, for example, involve new issues of title to assets and blending into a nonpaper-based mechanism, as well as who controls it, and so forth.

Increasingly, said Venturo, the issue isn’t the company at all, but instead “the fact that the regulations or laws haven’t even contemplated this future that we’re seeing,” Venturo said.

As such issues present themselves, added, “We can begin to point to the fact that this is emerging and here’s what we think about it. It would be helpful to start to get some guidance on this area.”

Another area of discussion addressed the changing nature of bank-fintech business arrangements with each other.

Henrichs related how he has had preliminary dealings with banks—both community and larger-sized—that have attempted to negotiate exclusive relationships with his company, while asking whether his company is “financially viable.”

“Not if I only work with you,” Henrichs says he replies.

More seriously, the issue is “scalability,” or how big or widespread any new technology might be adapted—either all at once or incrementally.

“The scalability piece is a challenge from a business risk perspective,” he said. “This is one that does require a change culturally within the bank. It has to be led from the top in this change, to recognize that you don’t have to do everything at once.”

The worst thing a bank could do, he said, would be to form an innovation group and tell them to go do something innovative, but then to tell the compliance and risk group that it would be measured with a zero-fault tolerance.

“You would let those two sides go to war. It doesn’t work very well,” Henrichs said.

Venturo framed the issue this way, in relation to vendor risk management and information security: “In our early days we’d try to work with some fairly large companies. The first thing that would happen when we were going to do whatever with them is give them the link to our vendor risk management portal and the 1,100 questions they need to answer.”

That didn’t work out so well.

“Some of these companies would say, ‘Nope, not interested. Come back when you guys figure out how to operate in this space’,” Venturo said.

For Venturo, the lesson of these early interactions stuck. Things have really change.

“It’s about being able to adapt and understand that not only our world is changing but the way that we interact has to change,” explained Venturo.

Can’t learn it out of a book

That the world is changing should be recognized by bank leadership, the two panelists said, and if they don’t recognize that, there isn’t much anybody can do. If they do recognize it, but don’t know what to do about it, the answer from both Henrichs and Venturo, was: Try something.

“I would say,” said Venturo, “the first, next, best thing to do is to have some focus. Do something. You can study things forever. If you actually want to get anything done, you have to move from ‘study’ to ‘do’.”

Whatever action taken must be appropriate for the institution, of course.

“But stretch, just a little bit,” said Venturo. “You have to start somewhere.”

Similarly said Henrichs, “You can’t think your way to what the next solution is going to be if you’re spending all your time in the conference room looking at white boards, then launch a product, and then are surprised why no one actually uses it.”

Instead, he again brought up the iterative approach, to “do something that isn’t fully baked,” meaning start incrementally, try something out, find out what doesn’t work, and then adjust.

That can be risky, he acknowledged, but total risk elimination is a failed strategy.

“If you eliminate all risk, you will do nothing new and you’ll still be sitting in your conference room when your bank crumbles around you as others redefine your space,” he said.