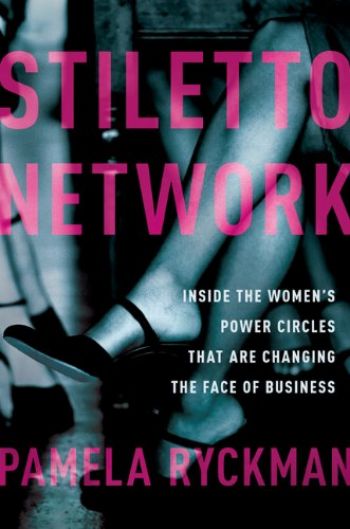 Stiletto Network: Inside The Women’s Power Circles That Are Changing The Face Of Business. By Pamela Ryckman. Amacom. 272 pp.

One of the most refreshing perspectives from Pam Ryckman’s The Stiletto Network is the credit so many women that she quotes gave to male bosses who provided them with opportunities to advance their careers. Many books I have read regarding female business success end up bashing men for a lack of equality in the work place. That does not happen in this book and I find it refreshing.

This is a positive and constructive book. The Stiletto Network celebrates the many accomplishments of women who were often the first in their area of expertise to rise to boards and to CEO positions within their companies. Now, as the book recounts, these accomplished women are using their influence to network for the benefit of promoting their female peers and the next generation of women business leaders.

As more women rise to the top of their respective fields of business, they have begun to realize that their experiences of dealing with careers and families are different from their male counterparts’. Not better or worse, just different. These women have found traditional business networking events to be valuable to their careers, but at networking events, you only talk with one another for long enough to make introductions and exchange business cards.

Women who excel in their careers realize that while they may be the only female executive in their company, there are accomplished women in other industries from whom they can learn, and with whom they can share ideas.

The author discovered that accomplished women all around the country have been gathering in informal groups that have taken networking to a new level. These ladies are starting to get together for dinners and retreats of their own. There they can discuss the challenges and successes they have experienced in their careers on a personal level. Once these women become friends, they begin to promote and support one another in business.

One such group of women is known as the Vault. Kim Moses, the former wife of Joe Montana, started it in 2009. Moses worked on sports production teams for both ABC Sports and the NFL. She took her experience producing sports programs and used those skills to begin producing television drama including Profiler and Ghost Whisperer.

While Moses found herself highly successful, most of her co-workers were men. She began to notice other women reaching the top of their respective fields and decided they might enjoy visiting with other executive women. Moses organized a dinner at her home for  a dozen. The event was so well received that these women have continued to meet monthly for the past three years.

“The Vault” name derived from the depth to which members have come to know and trust one another. Participation in the group has allowed members to expand their business knowledge beyond their own industry and many have forged business opportunities with other members of the group. Since the members are at the top of their industry, they have each become a valuable resource for one another.

Along with the professional success of women has come financial success. Women are forming networking groups to invest their wealth to help other women succeed.

Ann Kaplan established Circle Financial Group in 2003. It began as an investment think tank for high-net-worth women in finance. These women have valuable experience as investment bankers and a desire to use their knowledge to invest with promising young female entrepreneurs. Many of these women had worked at Goldman Sachs and Morgan Stanley.

When their careers began, they wore dark-colored suits with starched shirts and scarves tied in neat knots at the collar so their attire looked similar to the clothing worn by their male counterparts. I personally thank these ladies for leading the way for all women in banking.

Most of the innovation in technology is driven by entrepreneurs and takes place in the Silicon Valley of California. Many of these successful entrepreneurs are women who have embraced the culture of risk-taking.

In a start-up company, everyone, regardless of gender, is valued for their ideas. And everyone needs to contribute in order to get a new company off the ground, which results in an equalizing group effort force.

A number of women who have developed and sold successful businesses on the west coast have formed a dinner club of female venture capitalists called the No Whiners Club. Club members mentor promising young female entrepreneurs whom they have seen gravitating to the West Coast in record numbers who want to explore opportunities available to start their own businesses.

Amanda Reed, one of the successful business owners and a member of the No Whiners Club, points out that an easygoing business culture as one of the primary reasons women thrive in the West Coast business environment.

“Our work/life dynamic is just different,” she explains. “We work with male partners who take the afternoons off to coach their sons’ football teams. Here in the Valley, you don’t feel like you have to hide the fact that you’re a girl. As long as I’m making money for the fund, they make it an easy place for me to work.”

Her conclusion: If you are a young woman wanting to start your own business, head west!

Zehner is now the CEO of Women Moving Millions, a nonprofit whose members donate $1 million or more to organizations and initiatives that advance women.

Thus far, Women Moving Millions has raised more than $240 million for more than 100 women’s organizations. There are others throughout the country who are starting similar groups to leverage the financial influence women are gaining for the betterment of all women.

Starting your own network

What advice does the author have if you want to start your own version of a stiletto network?

1. Start now. You don’t have to already be at the top of your profession to begin a group. The earlier in your career that you form networks, the more likely you are to steer each other toward promotions and opportunities.

2. Think diversity. The most effective groups are drawn from women with diverse skills from across a variety of industries. The whole point of the group is to expand your knowledge and network.

3. Filter for relevance and shared experience. A tip from Ryckman: Build a group from among women about the same age and level of expertise. This allows the women to use their common bonds to quickly build trust and loyalty at the core of the groups.

4. Believe in the magic. When women with shared values and ethics open up to one another and begin aiding others, exciting things will happen.

6. Have courage; give courage. Members of Stiletto Networks encourage each other to pursue their passions and take risks. They speak up when they feel a fellow member is making a personal or professional mistake, but they do it in a spirit of kindness.

7. Raise profiles. Members should be a referral source encouraging each other to become visible leaders with the help and support of each member.

8. Use technology to facilitate; use technology to stay in touch. Make it a habit to e-mail articles or other relevant information to other members. Endorse their skills in social media.

9. Systematize “asks and offers.”  Members should give more than they take from the group. This keeps members from always being on the receiving end of the benefits.

10. If possible, go away together. This is the equivalent of men going to the golf course. Socializing and getting to know people in a relaxed setting strengthens friendships.

Both sexes work together and building a referral network with men is also important. Integration, not isolation, should be the goal for the workplace.

I enjoyed reading this book and could relate to many of the stories the women shared about their careers.

More in this category: « When wrong end round is right Taking on the “Tower of Basel” »
back to top